In the footsteps of Xuanzhang 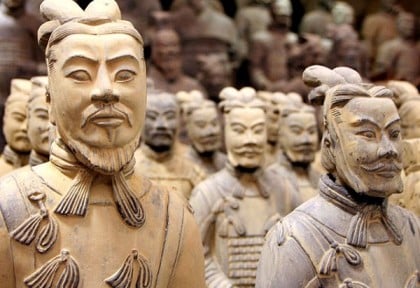 China today is full of travellers from different parts of the world. Although our tour covered four cities, it is the city of Xi’an that left the greatest imprint. Modern Xian is a large city and the capital of Shaanxi Province in central China. Once known as Chang’an (Eternal Peace), it is full of symbolism: it is where the great Silk Road began; it was the Old Tang dynasty capital, and capital of the Zhou, Qin, Han and Tang dynasties and for many centuries, the centre of the Chinese Empire. It was not without significance that Indian Prime Minister Modi met the Chinese President here in May, 2015. President Xi Jinping travelled to Xian to welcome Modi – the first time he has done so. It is very rare for Chinese leaders to accompany foreign guests outside Beijing. Xian also happens to be Xi’s hometown.


Modern China is now reviving the concept of the Silk Route and has also floated the idea of a Maritime Silk Road (MSR) as an expression of its aspiration to develop a string of ports and coastal economic hubs along its maritime trading routes. This encompasses the One Belt One Road (OBOR) initiative, and the China Pakistan Economic Corridor (CPEC) at its core. The success of this vision would allow China to gate-crash as a powerful rule-maker of international trade and commerce, and is central to Beijing’s rise as a mature global power. Xian is both the centre of ancient China and the harbinger of a new, influential and powerful China as a world power.
Historic Xian has three great sights to offer: The Old City Wall and the Palace; the Wild Goose Pagoda and the famous Terracotta Warriors.
Xian City Wall and the Old Palace are quite impressive. Once a sophisticated defence system protecting China’s ancient capital, Xian’s 637-year old Ming dynasty city wall is now the only complete wall fortification left in China. After the establishment of the Ming dynasty in the 14th century, Zhu Yuanzhang, the first emperor, began to enlarge the wall built initially during the old Tang Dynasty (618 – 907), creating the modern Xian City Wall.
The South Gate of the City Wall is the impressive Zhu Que gateway, where distinguished guests were once greeted and welcomed in times of yore. Reading the signs and placards in the Old Palace, I imagined how in 645AD, when the great Xuanzhang returned to Chang An after an arduous seventeen-year journey to India via the ancient Silk Road, he would have been warmly greeted at that very spot by the Tang dynasty chancellor Fang Xuanling.

Today, you can rent bicycles and go riding along the wall, and the view of the city from the top of the wall is quite impressive. Although Xian is apparently only a ‘second tier’ city, with a population of about 14 million, it has a large airport, wide roads, parks, shops and boasts several Indian restaurants as well. Since the discovery of the Terracotta Warriors, it has become a popular tourist destination.
To the history buff, Xian has several tales to tell, and every ancient wall in Xian reminds one of Xuanzhang, the great medieval traveller and Buddhist scholar who came to India during the reign of King Harsha.
For those uninitiated, Xuanzhang started off from Chang’an (ancient Xian), along the Silk Road in 629, in defiance of the Tang Emperor’s ban on travel. Helped by sympathetic Buddhists, he travelled via Kumul, following the Tian Shan mountains to Turpan. He then crossed what are today Kyrgystan, Uzbekistan and Afghanistan, into Gandhara (modern Kandahar), reaching India in 630 AD. Xuanzhang travelled throughout the Indian subcontinent for the next thirteen years, visiting important Buddhist pilgrimage sites, studying at the ancient university at Nalanda, and debating the rivals of Buddhism.
After returning to China and having obtained permission from the Emperor Gaozong (628-683), Xuanzhang, established the Daci’en monastery and, as the first abbot of the Daci’en Temple, supervised the building of a pagoda inside.
One of the pagoda’s many functions was to hold the Sutras and relics of the Buddha that were brought to China from India by Xuanzhang. With the support of royalty, he asked 50 ‘hierarchs’ in the temple to translate Sanskrit sutras into Chinese, totalling 1,335 volumes!
Even today, this World Heritage Listed temple contains practising Buddhists in the monastery.

The now-famous Terracotta Warriors of Xian is a sight not to be missed by any visitor to China. They are the thousands of life-size, hand-moulded figures which were buried with China’s first emperor, Qin Shi Huang. The Terracotta Warriors and Horses are the most significant archaeological excavations of the 20th century. Work is ongoing at this site, which is around 1.5 kilometres east of Emperor Qin Shi Huang’s mausoleum in Lintong, a few kilometres from Xian. Upon ascending the throne at the age of 13 (in 246 BC), Qin Shi Huang, later the first Emperor of all China, had begun to work on his own mausoleum. It took him 11 years to finish the project.
Each soldier looks different, and for tourists, there is the mandatory visit to the site where they demonstrate how the figures were made and many shopping opportunities!
Modern Xian has excellent infrastructure, with a very modern airport, train station, wide boulevards, stately buildings, good public transport, and several Indian restaurants as well!
- Advertisement -
Share
WhatsApp
Facebook
Twitter
Linkedin
Previous articleAustralia’s GK Harinath wins Pravasi Bharatiya honour
Next articleNRI opportunities for the government of India