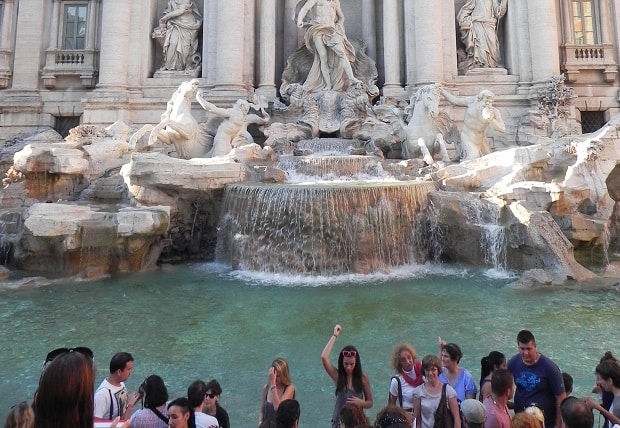 Reading Time: 5 minutesExploring the boot-shaped peninsula through its railway network crossing is a rewarding and interesting experience

I love train journeys. I enjoy its speed, rattle, occasional jerks and most importantly, gazing through the window at the rolling scenery outside. So when in Italy recently, I obviously opted for the railways, rather than flying.
Like the rest of Europe, the rail network in Italy is well developed. It offers the best of efficiency and comfort, and its outstanding record of punctuality gives a traveller more time to explore the nation’s uncountable sights.
You arrive at Rome and savour its history, then hop onto a superfast train to explore Florence’s Renaissance architecture, discover Venice’s canals at that perfect and romantic destination, and finish off the trip in Milan, Italy’s football city and the world’s fashion capital. I followed this itinerary and got a great taste of Italy.
Rome, the Eternal City
Arriving at the nation’s capital city, I sensed over two millenniums of history in the air that is filled with memories of Caesar, Nero, Michelangelo, Raphael and many other Roman greats who have contributed to build and beautify this city. This is the point from where the mighty Roman Empire expanded, Catholicism blossomed and European art and culture were epitomised.
Flanking the famous thoroughfare Via Veneto, the grand Regina Baglioni Hotel where I resided was charmingly close to the city’s iconic landmarks – the Spanish Steps, Trevi Fountain, Piazza Navona, the Pantheon, the Colosseum, the Forum and the Vatican City, dominated by St Peter’s Basilica and the Sistine Chapel. Visiting all of them proved to me why Rome ranks as one of the world’s most visited destinations. Delightfully, almost all of these sites can be spotted if one occupies the hotel’s 560sq/m luxury penthouse suite, which offers the best overview of the city, but at a price.
The two museums that drew my attention were the Borghese Gallery which exhibits many master creations of Bernini, celebrated as the father of Baroque style; and Capitoline Museum where artefacts simply mesmerize visitors.
Roma Termini is the city’s main railway station. With 29 platforms and over 150 million passengers each year, it is one of the largest railway stations in Europe.

Florence, the Renaissance Quarter
Just couple of hours from Rome by rail is Florence, recognized as the nation’s cultural and intellectual epicenter. The city in which the Renaissance period was conceived, was home to many well-known artists, writers, explorers and scientists; Leonardo da Vinci, Donatello, Raphael, Michelangelo, Dante and Galileo are just a few from a long list. It is currently an UNESCO World heritage site, with visitors from around the globe landing here with a huge appetite for art as this city houses several museums and galleries, the most famous being the Uffizi Gallery. Designed by Vasari in the 16th century, it is regarded by art connoisseurs as one of the most important museums in the world, displaying classics from Bottichelli, Leonardo da Vinci, Raphael, Titan, Caravaggio, Michelangelo and many masters of the period. I regretted not having enough time to spend here. In fact, one needs days, perhaps weeks, to go through the wide range of the exhibits, each of which is a gem on its own. I also dropped in on another famous museum called the Accademia, to pay a visit to Michelangelo’s immortal creation David, an exact copy of which graces the Piazza Del Signoria, a cobblestone paved area powdered with a gorgeous fountain and several samples of art, akin to an open air museum.
Many of the city’s churches are works of art in themselves, the most famous being the city’s landmark Santa Maria del Fiore, popularly known simply as the Duomo.
My next stop on the train was to Pisa to see its world famous Leaning Tower.

Venice, the centre of Romance
Venice, as we have all seen in pictures and photographs, floats dream-like on canals and lagoons. This small city, with its ensemble of waterways and tiny bridges, gondolas and yachts, and its labyrinth of narrow alleyways opening to large piazzas flanked by a galaxy of colourful buildings glaring at the paved space occupied by locals, tourists and pigeons, induces novel thoughts even in the mind of the unromantic.
The best way to appreciate the beauty of Venice is by wandering aimlessly and losing yourself in its maze of unknown streets where every turn finds a new charm like an church, a former palace, an old house or a café servicing authentic Italian coffee and snacks. However, whichever mystic route is followed, you will ultimately end up at St Marco Square conquered by the presence of St Mark’s Basilica and the adjacent Doge’s Palace, the two most significant signposts of Venice. Another inescapable Venetian site is the Rialto Bridge, the oldest pathway across the Grand Canal, a tour of which in the local water-buses called Vaporetto, is fascinating. It presented me a different view of the fantasyland, while thinking about episodes of Bassani, Portia and Shylock from Shakespeare’s Merchants of Venice.

Milan, the Mecca of Italian football
Being the home of legendary football clubs Inter Milan and AC Milan makes Italy’s second largest city football-crazy, but there is more than that for visitors. Here you can see the Leonardo’s breathtaking fresco The Last Supper in a museum inside the church of Santa Maria delle Grazie (you are required to pre-book tickets and the museum is closed on Mondays), and ‘Rondanini Pietà’ a marble sculpture that Michelangelo worked on from the 1550s until his last days in 1564, in the Museum of Ancient Art of Sforza Castle. However, the most visited landmark of Milan is the Duomo, the world’s largest Gothic cathedral which, with its 3,400 statues, 135 spires and 155 gargoyles, simply mesmerizes onlookers, myself being no exception.
Milan is the world’s fashion capital and you can’t leave the city without paying a visit to its celebrated fashion district located in the heart of the city, not far from the Duomo. Here the streets are lined with shops of every designer label that you can think of. While wandering around, I noticed parking spots mostly filled with Bentleys and Ferraris, obviously shoppers! So my retail experience was restricted to window gazing, and surely it was rewarding to discover the latest on fashion.

TRAVEL NOTEBOOK
Getting there: Singapore Airlines (www.singaporeair.com) has daily flights from Australia to Rome via Singapore. From Roma Termini railway station there are connections to all major Italian cities and other European destinations. Check www.trenitalia.com for details or contact CIT Holidays in Australia on 1300 380 992 for getting rail tickets on hand before leaving home
Accommodation: At Rome at Regina Baglioni (www.baglioni hotels.com), at Florence at La Casa Del Garbo (www.casadelgarbo.it), at Venice at Hotel Commercio & Pellegrino (www.commerciopellegrino.com) and at Milan at Best Western Hotel Madison (www.madisonhotelmilano.com). All of these hotels are centrally located in close proximity of the main railways stations.
More information: www.turismoroma.it; www.turismo.intoscana.it; enturismovenezia.it and www.enit.it.