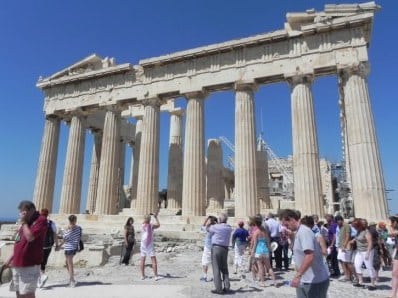 Reading Time: 5 minutesThe richest city in the world, if antiquity can be priced, says SANDIP HOR

“It’s true our nation is now going through a period of financial crisis, but if history and heritage can be valued by any bank, it will surely emerge as one of the richest in the world,” says my omniscient guide Ariti while showing me around the ancient-period sites of Athens, the capital city of modern Greece.

It makes me wonder if I will feel like he does, but as samples of architectural splendour from antiquity unfold before me, I begin concurring with Ariti’s statement.

Deriving its name from the goddess Athena, this 2500 years old city, reached its golden age during the 5th century BC when her intellectual thoughts, scientific ideas and artistic creations gained universal recognition.

Intellectualism flourished among people, giving birth to words and ideas like ‘democracy’, ‘harmony’ and many more. A great leader and statesman by the name of Pericles emerged on the scene and bestowed the territory with architectural marvels. Future occupiers of the land – the mighty Macedonian, Roman, Byzantine, Venetian and Ottoman conquerors, from Alexander the Great of Macedon to Roman Emperor Hadrian, added more to it, leaving behind a historical tapestry decorated with numerous specimens created from stone.

Despite millenniums of heat, dust, wind and rain, the relics of soaring temples, exhilarating theatres, colonnaded streets, public squares and archways still remain to draw a picture of past richness and glory. The most significant testimony of this is the Athenian Acropolis, the crown jewel of Greece, if not all of Europe.

This location was a fortified citadel, spreading over an area of 3 hectares on a flat-topped rock, 150m high and populated with gateways, theatres, palaces and marble temples, the archaeological ruins of which still mesmerise onlookers.

We entered the area, going past the mosaic-tiled Theatre of Dionysus where classical-age Greek poets Aeschylus, Aristophanes, Euripides and Sophocles witnessed the première of their plays; climbed up to the Propylaea, a rectangular building once admired throughout the ancient world as the grand entrance to the world of Acropolis; and stumbled upon the Parthenon Temple, the preserved ruins of which still hold enough ‘oomph’ to hypnotise visitors for a while.

The image is familiar as seen on the cover page of almost every touristy brochure on Greece – an imposing marble edifice flanked with huge columns on all sides. It was built to house a mammoth gold and ivory statue of Athena. While taking pictures from different angles, I note the building design to be ideally proportioned. Ariti confirmed this, saying architects designed every piece of this structure on a precise ratio of 9:4 to make the temple perfectly symmetrical. Perhaps such unique engineering feats make creations like the Parthenon qualify as wonders of the world.

“Many come to Athens just to see this human endeavour of extraordinary scale,” say Ariti, and I can understand why they do so. Witnessing through one’s own eyes such an epic landscape filled with grand composition of perfectly balanced structures on an expansive natural site, is a lifetime experience worthy of the hours of travelling around the world to view it.

Though much smaller in size, two other temples in the Acropolis demand admiration as well. One is the Temple of Nike, built to commemorate the Athenians victory over Persian invaders at the Battle of Marathon. It is said that the ‘Nike’ brand name is derived from here. The other is the impressive Temple of Erechtheion, the signature feature of which is statues of six maidens or Caryatids supporting the roof of the balcony. Only one of them is only the original; the other five are housed in Acropolis Museum which we visited earlier to gaze at them, along with several other archaeological finds from the Acropolis that includes figurines, frescos and ornamented pediments of the temples.

The view of Athens from up here is breathtaking. In the distance we spot a series of columns and a monumental arch. Ariti identifies them as ruins of the famous Temple of Zeus, the largest temple ever built in Greece, and Hadrian’s Arch. However, a well-presevered ancient building dotted just at the foothill of the Acropolis catches my eye. It is the Temple of Hephaestus inside the Agora, the city’s ancient marketplace which, for over a millennium, was a vivid scene for politics, commerce, philosophy, arts and athletics.

We head there next, and thrillingly walk along the ruined Panathenaic way where once Socrates addressed his followers, and St Paul preached religion. A beheaded statue of Roman Emperor Hadrian rests alongside, a silent witness of the city’s momentous history. Artefacts at the Stoa of Attalos, a museum which was earlier a shopping complex, gives us an idea of the history of that time.

Though Athens is lavishly spread with highlights from the Classical, Hellenistic, Roman and Byzantine times, it hosts concurrently a 21st century modern sprawl that offers luxury hotels, enchanting restaurants, vibrant cafes and taverns, great shopping at avant garde malls and at bustling markets, and an efficient network of public transportation for modern day visitors to enjoy their time in the city.

Two Athenian quarters, Monastiraki and Plaka, featuring labyrinthine streets and neoclassical architecture, electrify visitors as impressive platforms between the past and present.

At Monastiraki, which derives its name from a little forgotten monastery, an Ottoman mosque shares space with the remains of a Roman library and a Hellenistic water clock, but what draws visitors today is its bustling bazaars and colourful markets stalls that sell everything from junk and jewellery, bargaining being a fun part of the game there.

Nearby Plaka, the oldest settlement of Athens, claims to be the city’s gastronomic centre as every inch of the cobblestoned locale is filled with cafes and taverns serving mostly traditional Greek cuisine which includes the mouth-watering souvlaki and moussaka. Friendly Athenians will be disappointed if you leave without sampling them.

Both the ‘must-visit’ neighbourhoods are walking distance from Syntagma Square which is the nucleus of Athens today, as Agora was yesterday. Dominating the square is the Greek Parliament House, seen quite often on television during the nation’s economic doldrums. Visitors are drawn to this neo-classical building by its grandness and by the pomp of the changing of guards ceremony that takes place every hour in front of the Monument of the Unknown Soldier, a evocative relief depicting a dying soldier sculpted on the front wall. Guards dressed in their famous uniform of kilt and pom-pom clogs are present day and night, guarding the memorial.

Getting there Fly Singapore Airlines (www.singaporeair.com) to Istanbul from where Athens is a short flight away with Turkish Airlines (www.turkishairlines.com) or Olympic Air (www.olympicair.com).

Accommodation The Metropolitan Hotel (www.chandris.gr) with a view of the Saronic Gulf, combines traditional Greek hospitality and luxury. There is shuttle service every hour to Syntagma Square 10 minutes away.