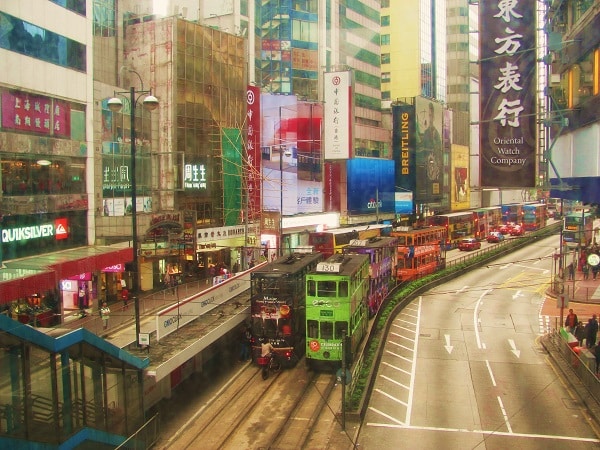 Reading Time: 5 minutesEquipped with a canvas tote bag, I didn’t quite cut it in Hong Kong, one of the world’s ritziest destinations for the well-heeled traveller and a destination for many of the wealthiest from neighbouring mainland China. Squeezed in beside me in the express lift that would whisk me to my room, was a young girl perhaps no older than 14, wearing Chanel from top to toe, carrying multiple large shopping bags from Prada, Fendi and Chanel, for here in Hong Kong, labels matter.

Located on China’s south coast on the Pearl River Delta facing the South China Sea, HongKong has long been a magnet for shoppers from all over the world. But it also offers the traveller a rich cultural heritage that is worth knowing. Its history began upriver in the city of Guangzhou, where the British began trading with China.  While the Chinese initially resisted, Hong Kong was finally opened to trade in 1685 and by the end of the 17th century, the British, French, Dutch, Danes, Swedes and Americans had gained a firm foothold in the region. Hong Kong Island and Kowloon were ceded to the British after the Chinese were defeated in the Opium Wars. The New Territories were leased to the British for 99 years in 1898, and the colony soon became a thriving commercial centre serving as the main conduit for trade between China and the world. After the handover to China in 1997, Hong Kong, despite much scepticism, made a smooth transition and remains one of the world’s leading financial capitals and a dynamic powerhouse.

A city of seven million people, Hong Kong is one of the most densely populated cities in the world. Designer stores, glitzy shopping malls and skyscrapers that appear to clingprecariously from steep slopes, stand alongside narrow streets lined with traditional shop houses. While the bustling harbour may be its most familiar image, Buddhist temples, rice paddies and villages are also part of its identity comprising a dozen islands divided into four main areas; Kowloon, Hong Kong Island, the New Territories and outlying islands.

To discover Hong Kong, begin in Central District, the financial and business centre, where you can head for Victoria Peak, the highest point (552m) on Hong Kong Island, on the legendary Peak Tram built in 1846. The steepest funicular railway in the world, it has an incline of up to 27 degrees. Hong Kong Park, from where the Peak Tram departs is an oasis of green with lily ponds and expansive lawns, where you can observe locals performing the graceful movements of Tai Chi. Many historic colonial buildings are located nearby including Flagstaff House built in 1846, now the delightful Museum of Tea Ware. Stroll by St John’s Cathedral, Government House, the Helena May Building, Court of Final Appeal, Old Supreme Court and the Foreign Correspondents Club, just some of the grand buildings to be found here. Central District also has futuristic architecture including the Bank of China Tower, a 70-story prism designed by the acclaimed architect I M Pei, and the towering HSBC building designed by Sir Norman Foster.

Man Mo Temple on Hollywood Road, dating from the 1840’s, is the oldest temple in Hong Kong, dedicated to the gods of literature and war with giant hanging incense coils billowing with fragrant smoke, burned as offerings by worshippers.

Turn down winding Des Voeux Road, Sutherland and Wing Lok Streets to find dried seafood, ginseng root, edible bird’s nests and herbal medicine. My favourites are Cat Street and Hollywood Road for antiques, curios, Chinese art and porcelain. The mid levels travelator that extends for 800 metres is the world’s longest covered escalator and provides a great way to see the street life below. SoHo is a lively dining precinct with funky bars and restaurants for those who can muster the energy to continue going in this city that never sleeps
Catch the delightful double deck timber tram in operation since 1904 to Wan Chai for herbs, traditional Chinese jackets, electronics and antiques. Nearby are upscale funky local designers along Star, Moon and St Francis Streets, together with some great eateries.

The most pleasurable way to cross the harbour to Kowloon is onboard the Star Ferry founded in 1888 by Dorabjee Nowrojee, who arrived from India and realized the potential of steamboats over the small sampans used as the form of crossing.
In Kowloon, stop by the historic Clock tower built in 1921, before proceeding to the Hong Kong Museum of Art, a treasure trove of ceramics, jade, calligraphy, bronzes and lacquer ware from China. Then head for the shopping precinct of Nathan Road that caters to locals before ending your stroll at the food stalls of the Temple Street Night Market, with outdoor stalls offering everything from souvenirs, clothing, accessories, reflexology and fortune telling, seafood and noodle restaurants. Shanghai Street is one of the city’s oldest streets and Jade Street has 400 or so stalls selling amulets, ornaments, necklaces and trinkets made from jade. At Canton Road and Ocean Terminal, you’ll find chic designer label boutiques and along the waterfront promenade in the evening, watch the Symphony of Lights, with laser lights beamed from 40 skyscrapers.

Perched on the 56th floor of the Shangri-La Hotel’s Club Lounge, I enjoyed watching the twinkling lights reflected off the water of one of the world’s great harbours, with sweeping views across to the flashing neon skyscrapers of Kowloon. But it was time to leave. As I pulled my wheelie bag along to catch the airport bus, a chauffeur driven black Mercedes drove by with the young Chinese girl I had met in the lift barely visible beneath piles of shopping bags.