Hiking in the wilderness 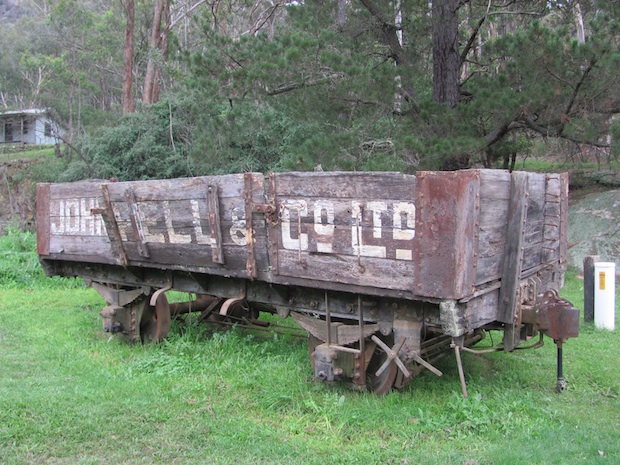 When Emirates opened the swish Wolgan Valley Resort and Spa in 2009, many Sydneysiders wondered why. But the resort helped put Wolgan Valley on the tourist map and in my sights. Having spent $125 million on the resort’s construction, a price tag of $1950 per night was clearly pitching at a market well above mine. But there is an alternative way to get there. I booked a two day hiking trip, through Life’s An Adventure, with my 20 year old daughter Lauren.

At the western edge of the Blue Mountains, the area is renowned for being so remote that only recently a living fossil was discovered there dating back 150 million years to the Jurassic period. The Wollemi Pine lies in an isolated, deep gorge in the middle of 48 million hectares of bushland. The only trees like them were found in fossils deposited in prehistoric times, which links the history of Australia’s flora to the time before it became a continent.

Meeting at Katoomba Railway Station at 8.30 am was no problem for the five other hikers who had given thought to the need for sleep by staying there overnight, but for me and Lauren it meant catching a 5.48am train from Sydney’s Central Station. While a thermos of strong coffee got me going, Lauren fell sound asleep for the two hour trip.

With blue skies and a forecast of a possible shower, we hadn’t factored in the black clouds that came overhead, the heavens opening with a torrent of rain. Temperatures dropped and it became very cold. We opened our overnight bags and put on every layer we had.

The jeep with Timmo, who took care of driving, cooking and logistics, and guides Joel and Denis, was there to meet us, and after piling our gear onboard we drove along the Great Western Highway before turning off along a bumpy gravel road to Wollemi National Park.

Few people venture more than a few kilometres from the park’s boundaries and as a result there is a feeling of remoteness once you venture further into the interior. After lunch, a roll filled with tasty delights that had suffered from the bumps on the road and a slice of chocolate cake, we made our way through a glow worm tunnel – part of an old railway line that once serviced the area. Turning off our torches to adjust to the darkness, thousands of tiny glow worms lit up the tunnel like fairy lights. Emerging at the other end we entered a lush landscape of ancient tree ferns, some dating back many hundreds of years, and sheer cliffs rising 183 metres upwards.

“It may well snow tonight,” Denis remarked, something I hadn’t counted on, it was only autumn after all. We continued walking, viewing dramatic escarpments, rock formations and tall eucalyptus trees, before commencing our descent into the beautiful Wolgan Valley. Joel took out the necessary equipment from his backpack for making billy tea, which spurred us on as we followed a bush track that ran alongside a creek to our campsite at the historic ruins of Newnes. An atmospheric hotel filled with memorabilia, remains of coke ovens and piles of bricks are the only signs remaining of a time when a mining community lived here.

Timmo had set up our tents with spongy comfortable mattresses and had made a roaring fire. Great Australian wine, a gourmet cheese platter and hot showers all round, got us in good spirits ready to enjoy a delicious dinner that Timmo had miraculously produced featuring several curries, roasted vegetables, rice and fresh grilled snapper followed by a kiwi fruit pavlova with lashings of cream. Wearing seven layers, jeans and track pants on top, a beanie and gloves, my usual glamorous appearance had been dispensed with. The tent was surprisingly cosy and we all slept soundly with a few snores that Denis said could be attributed to a wombat.

Trains depart hourly from Central Station for the two hour trip to Katoomba (www.sydneytrains.info.com.au). If travelling by car, head for the Great Western Highway with fast access via the motorway. Access to Newnes is along Wolgan Valley Rd.

Temperatures are much cooler than in Sydney. Spring and autumn are the best seasons to hike here. Sturdy walking boots and layers of warm clothing are essential.