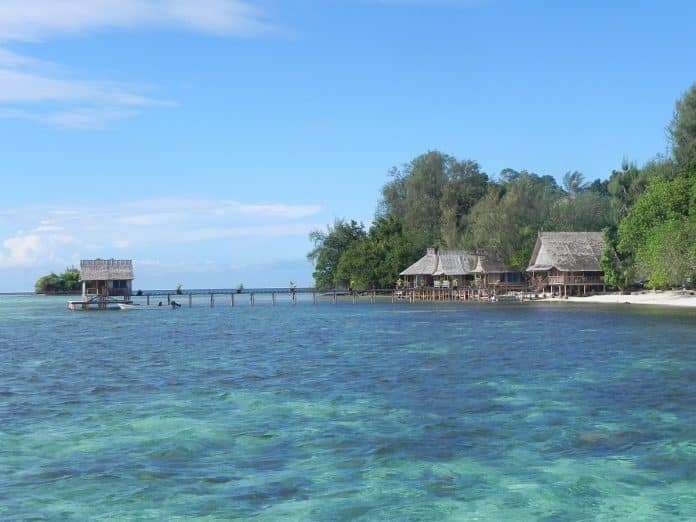 Reading Time: 6 minutesA few years back, when wandering around the Temple Mount precinct in Jerusalem, my guide said that 10th century BC legend King Solomon used gold from a South Pacific island to build a grandiose shrine, known in fables as King Solomon’s temple. Sixteenth century European explorer Alvaro De Mendana perhaps heard about this story. So, in 1568, when he landed on an archipelago in the South Pacific and discovered some gold in the area, he named it Solomon Islands, thinking it to be the place from where the biblical monarch sourced his gold.

That gold reserve is still there, but the lure for modern day travellers to visit Solomon Islands is not the glitzy metal. Rather, it is to experience a paradise-like destination, which unlike its other Pacific Ocean neighbours, still lives without many modern-day trappings.
“In fact, many come to our country just to relax, chill and enjoy that isolated and time-stopped setting, not to be easily encountered anywhere else in this world,” says Stella Lucas from Solomon Islands Visitors Bureau.
As I encounter the islanders’ laidback and slow-paced lifestyle – and see them guarding an unspoilt natural environment comprising coral reef-rimmed lagoons, sandy coastline, tropical jungles, rainforests, waterfalls and volcanoes – the essence of this statement reveals itself to me.


A British protectorate until 1978, Solomon Islands today is an independent nation comprising of a cluster of around 1,000 islands, lying 3,200 km northeast of Australia. Only around 30% of the islands are inhabited by a population of around 623,000, mostly by people of the Melanesian origin though there are some of Polynesian and Micronesian roots as well. Their combined culture and tradition form the backbone of the nation’s social structure.
Modernity, particularly in terms of infrastructure, is pretty much absent in the country, other than in capital Honiara, where one can see but a few contemporary urban elements. But this doesn’t worry the 20,000 visitors arriving here annually: they are not here to taste modernity but to get away from it. The best way to achieve this is by moving out of Honiara to other island provinces where the natural scenery reminds one of documentaries on the Discovery Channel.

I travel to Munda and Gizo, which are petite settlements dotted in the islands of New Georgia and Ghizo in the western part of the country. In no time, I pick up the local lifestyle by following ‘island time’ in which the word ‘rush’ is out of bounds. I feel utterly relaxed and healthy when I sleep with the soothing sounds of water splashing the doorsteps of my modest hotel room, eat island food – mainly locally caught fish with sweet potato and slippery cabbage, plus fruits like papaya and banana – and drink plenty of coconut water. I even start chewing betel nuts like the locals do, though it requires me to brush my teeth a few extra times to avoid the red stains. The stained smile, by the way, is almost an emblem of the happy Sollies.

I go inland for bushwalking, rainforest cruising, waterfall bathing or visiting local villages to experience life so far removed from the new world. While exploring inland locations, I notice extensive logging going on and come to know that this is one of the country’s economic stimulators. But I can’t help but feel concerned, knowing how the land is losing its vital ecological balance, with large primary forests disappearing.
While wandering in the bush, I come upon many ruined tanks, weapons and barges buried in the jungle. They remind me that Solomon Islands during World War II was the stage for many fierce combats between the Japanese and Allied troops. Around 37,000 lives were lost on both sides. Several battle sites still remain virtually untouched and bring alive scenes from legendary war movies such as Battle of Guadalcanal and Guadalcanal Diary, the island of Guadalcanal, which is home of Honiara, being one of most significant battlegrounds of WWII.

Though hinterland experience can be refreshing and historically thrilling, raw encounter with the sea is the key theme in Solomon Islands. Some of the world’s best sites for scuba diving and snorkelling are located here. Underwater adventurers not only see a mesmerising galaxy of coral reef and multi-coloured marine life, but also something else, which perhaps can’t be found to this extent anywhere else in the world.
It’s the submerged WWII relics which comprise battleships, bombers, fighters and many other dumps from the war era. The seabed near Honiara is strewn with so much wreckage that it’s now nicknamed as ‘Iron Bottom Sound.’  I am not a diver, so I don’t get to see any of these through my own eyes, but after hearing stories from some visiting divers and going through some of their photoshoots, I can easily imagine the extent of the war and damage.

When subaquatic time is over, above-the-surface activities occupy my time. These include swimming, kayaking, fishing, rafting, poly-crafting and wharf jumping to cruising the lagoons on a small dinghy or shuttling between islands on a motor boat, sometimes through the open sea. Many of these isolated islands have natives stories associated with them, like the one called ‘Skull Island’ which still is home to many human skulls left as a souvenir from the land’s brutal ‘head hunting’ time. Surely, an eerie feeling engulfs when you are there.
History greets me when I reach the shores of the isolated Lubaria island filled with tales of a 26-year-old American lieutenant named John F Kennedy who later became world famous as the 35th US President. It was here that Kennedy and his 11 crew members swam to after their patrolling boat, PT 109, was sunk by the Japanese destroyer Amagiri on 2 August 1943 during the peak of WWII. All of the Americans were eventually rescued with the help of two local islanders, Eroni Kumana and Biuku Gasa.

To immortalise the significance of this heroic episode, the island has been named after Kennedy whose birth centenary is being celebrated worldwide this year.
Kennedy didn’t forget Eroni and Biuku. After becoming President, he invited both of them to Washington DC but it’s said that a British colonial officer prevented them from going because they spoke no English.

That surely disappointed the Sollies, but it never stopped them from taking pride in proclaiming that their two countrymen saved the life of a future president of America.
Both Eroni and Gasa died in the recent past, but no one leaves Solomon Islands without hearing their stories.

GETTING THERE: Currently, Solomon Airlines (www.flysolomons.com) and Virgin Airlines (www.virginaustralia.com) fly from Brisbane to Honiara.
STAY: There are some nice hotels of international standard in Honiara, Coral Sea Resort (www.coral-sea-resort.com) and Heritage Park Hotel (www.heritageparkhotel.com.sb) ranking at the top. Accommodation options in other islands can be fairly basic but comfortable; Agnes Gateway Hotel (www.agneshotelsolomon.com) in Munda and Fatboys Hotel (www.solomonislandsfatboys.com) on Mbabanga Island near Gizo are two of the better ones.
PRECAUTION: Plenty of mosquitoes around, so don’t leave home without some strong insect repellent and consult doctor for anti-malaria medication
MORE INFO: www.visitsolomons.com.sb