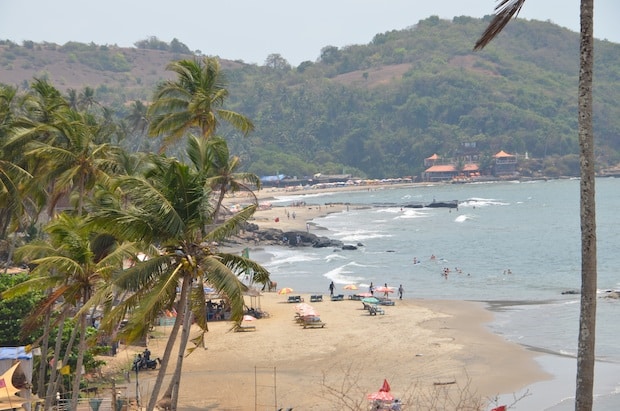 Many go to Goa for its beaches but are taken in by its history and culture.

Located on the shores of the Arabian Sea in the country’s west, the Indian state of Goa has something on the menu for everyone. From nature devotees to beach lovers, water sport fanatics to architectural enthusiasts, and foodies to party goers, there will be something for you. There is even something for those distinctive holidaymakers who enjoy doing nothing other than leisurely watching the sun rise and set.

This is where the nation’s elite and affluent come to party these days and where new rich Russians, Iranians and Israelis arrive by the planeload to taste “freedom”.

Goa’s varied geography creates a scenic setting. The land rises from the sea inwards to the verdant hills, crossing over lush green valleys richly spread with swaying coconut palms, cashew plantations and paddy fields. The two main rivers, Mandovi and Zuari, keep the land fertile. The beauty of this untouched nature causes romances to blossom, and passions to soar, and this combination makes Goa an ideal destination for honeymooners.

Many come to Goa for its beaches. With a sandy coastline just over 100 km long, they are obviously in abundance. The most popular ones are Calangute, Baga, Anjuman and Vagator in the north of the state, while Colva dominates the south.

Though surrounded by aspects of the 21st century, the beachside ambience is still very rural and carefree, which makes the Goa coast unique. In the sixties the hippies loved this atmosphere and made the idyllic seaside towns their home for years.

Life on the shoreline begins early in the morning when the sandy stretch is filled mostly with joggers and surfers. With hawkers still asleep, the domain is peaceful and serene.

As the golden rays of the rising sun start brightening the horizon, you see the return of fishing boats, pushed over the frothy waves to the shore, where locals and visitors anxiously wait to glimpse the catches of the day, expecting some to be on their plates during lunch or dinner.

As time passes, the air warms up to welcome hordes of swimmers, sun bathers and water sport fanatics. They are joined by souvenir sellers, coconut vendors and touts letting you know the best joints to have a meal or chill out after sun down.

The local fishing community also takes space on the sand to repair their boats and mend holes in their fishing nets before their next trip out to sea. Chatting with them is interesting as you hear about their simple lifestyle, so different to the way much of modern India lives.

Shabby shacks along the beaches are an institution of Goa. Made out of bamboo poles and palm leaves, these makeshift cafes, made popular by the hippies, have a reputation of serving delicious food to be washed down with beer or cashew feni – a local alcoholic beverage, where the first guzzle gives an instant thrill. “Unfortunately the mushrooming of modern cafes and restaurants around the beaches are forcing us out of business,” commented one shack owner regretfully.

As the coastline faces westwards, watching the sun plunging into the blue waters of the Arabian Sea is a divine experience. The colours from the setting sun reflect on the silken sand and soak the watchers in a magical ambience. This creates the right party mood after sun down when neon signs from the nightclubs dominate the skyline and loud music echoes from inside.

Having fun is synonymous with holidaying in Goa, where singing and dancing are part of life. This comes from the Portuguese who laid claim to the land in 1510. During their 451 years of stay they made the way of life here more European than typically Indian.

Floral skirts and blouses still dominate over saris and salwar kameez, black presides over white, piazzas or squares grace town centres and wine shops appear at every turn. Here in Goa, English is spoken more than Konkani or Marathi and the state capital is referred to by its former name, Panjim, rather than its Marathi version, Panaji. White baroque churches set against lush green foliage can be spotted everywhere, though the Christian population of the state is only around thirty per cent. Most of the houses, some still named in Portuguese like “Casa Del Cuna” or “Casa Del Soi”, are Iberian bungalow-style with sloped tiled roofs, ornate “balcaos”, or balconies, and creeping red, pink or orange bougainvillea blossoms adding extra colour to the scene.

The vestiges of the Portuguese masters have created an alluring appeal for outsiders to visit Goa, to flirt with culture, tradition and particularly buildings that are over four centuries old.

The best place to start this odyssey is in Old Goa just a few kilometres south from Panjim. It was the capital of the Portuguese colony until 1843. The warren of narrow streets, piazzas and grand villas have long gone; all that remains are a score of extraordinarily ostentatious churches, monasteries and convents. Declared as a World Heritage Site by UNESCO, today it is the state’s main cultural attraction.

Sights worth seeing include the Arch of the Viceroys, built in 1597 to commemorate Vasco da Gama’s arrival in India; the distinctive domed Church of St Catejan (1651), modelled on St Peter’s Basilica in Rome; and the Basilica of Bom Jesus, which houses 16th century missionary St Francis Xavier’s body. Every tenth year the body, which has miraculously remained incorrupt for centuries, is exposed for public veneration, drawing thousands of Christians from around the world to Goa.

Aside from Panjim, the capital city since 1843, the other cities for tourists are Maupsa, famous for its market, and Margao, well known for old churches and colonial mansions.

However the draw card for tourists, and the showpiece of Panjim, is the 1541 Church of Our Lady of Immaculate Conception. It sits on top of a hillock, and a gleaming white processional stairway, which reminds many of the Spanish Steps in Rome, leads up to the dazzling façade of this 463-year-old edifice. It’s said that all Portuguese viceroys, after arriving in Goa, would first stop at this location to get a top view of their empire before proceeding to their palaces. It’s a practice followed by visitors today in order to glimpse as much as possible of the inviting Goan terrain marked with old houses, churches, coconut trees, rivers and of course the sea.

Enjoy the comfort of the world’s most advanced aircraft, the Boeing 787 Dreamliner, and superior in-flight services with mouthwatering Indian meals by flying with Air India (www.airindia.in) which operates non-stop between Sydney/Melbourne and Delhi with convenient connections to Goa. Business class passengers enjoy the comfort of a flat bed and top class Indian hospitality.

There is no shortage of hotels and resorts to suit any budget. One option is to stay at the plush Resort Rio (www.resortrio.com) in North Goa near Baga Beach