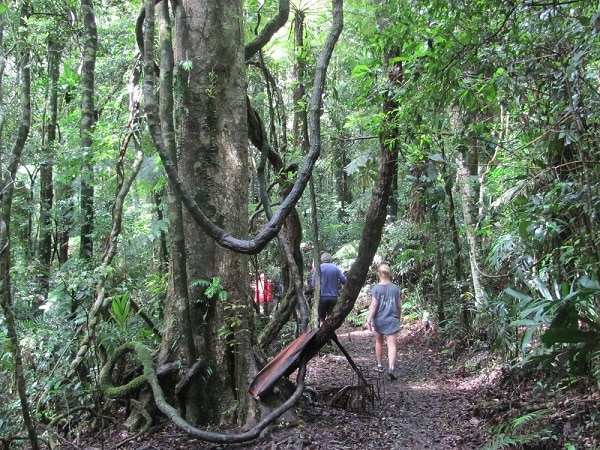 The large, glossy black skink remained quite still watching us, while a diminutive wombat rustled in the undergrowth. Our walk had begun deep within Lamington National Park, setting out from O’Reilly’s Rainforest Retreat along a track shaded by massive rainforest trees, tumbling vines and banyan roots twisted around boulders.

My daughter Lauren and I had joined other guests for a morning walk with our guide Luke to Elabana Falls, following a track alongside a rock strewn freshwater stream that required us to clamber across to view the waterfall. On our return we saw bright blue spiny crayfish on the rocks and then, lying curled up in the centre of the track sunning itself, was a red bellied black snake. With a diet that comprises mainly frogs, we still considered it prudent to sidestep one of Australia’s most venomous snakes.

Lamington National Park is a vast wilderness area just under two hours’ drive inland and a world away from the glitzy high rise buildings of the Gold Coast. And while the Gold Coast is one of our top vacation destinations, few venture to Australia’s largest remnant of subtropical rainforest, a place of waterfalls, deep valleys, steep cliffs gouged out of volcanic rock and rugged mountain ranges.
Listed as a World Heritage site in recognition of its biodiversity, it offers various forest types including cool, temperate ancient Antarctic beech trees, dating back thousands of years, their trunks green with moss. Lush sub tropical rainforests found in the valleys have pink barked Brush box, mottled Coachwood, Red cedar and the world’s largest collection of towering Hoop pine, one of the world’s oldest conifers. In the drier, open areas, expansive scented eucalypt forests are home to bright crimson rosellas, wallabies and koalas.

On a journey from the top of the McPherson range, at a height of 1100 metres above sea level, down the slopes to the open forest you will pass approximately 300 different species of trees, 85 different species of vines, 90 different fern and orchid species as well as many varieties of mosses, lichens and fungi. As a result of such a diverse environment, Lamington National Park, covering an area of 20,000 hectares, sustains a staggering number of animals – over 160 species of birds, 70 species of mammals, as well as many reptiles and invertebrates.

To get us there, we booked a transfer with David Strong, who has been driving to O’Reilly’s to deliver supplies for decades. He knows the area so well that he doubled as our tour guide, stopping at the picturesque historic township of Canungra.
The road then took on considerable elevation with long sweeping turns until we arrived at O’Reilly’s Rainforest Retreat in time to watch the bird of prey show, showcasing the birds found here in free flight including a barking owl, kite, brown falcon and Stella, a spectacular wedge tail eagle, with each bird brought in resting on the arm of Mark ‘The Birdman’ Culleton. Watching the birds was fascinating, in part because they followed Mark’s every command and because there was nothing to stop them flying away.

A 4WD tour to Kurrajong Lookout followed with splendid views of the valley below and billy tea that our guide Justin infused with eucalypt leaves, served with damper, the Australian bushman’s answer to the scone.
At almost 1000 metres above sea level, nightfall at O’Reilly’s brought chilly winds, the landscape draped in mist and swirling clouds. The crackling open log fire in the guesthouse lounge room provided a cosy place for guests to curl up and read or recount the day’s adventures with other guests.

Just after daybreak I joined a guided walk, the best time to view rosellas, bright green and red king parrots and black and gold regent bowerbirds. Over breakfast I scrutinised the park map. There are over 160kms of walking trails spanning distances from 400 metres to 32 kilometres. I settled on the shortest – O’Reilly’s Tree Top Walk – which  allows you to walk across a suspended walkway high above the forest floor with two observation decks 30 metres  above the ground.

Later that afternoon, a guest laden with serious hiking gear including binoculars, emergency rations and beacon returned from the 21-kilometre Albert River Circuit, which passes several waterfalls with evocative Aboriginal names such as Gurragungalli Falls and Jimbolongerri Cascades.
Prior to European settlement, the Lamington region was inhabited for thousands of years by nomadic Aboriginals of the Yugambeh kinship group who lived by collecting  a bountiful harvest of nuts, native yam, honey, macadamia nuts and plants and hunting birds, wallabies and kangaroos. Evidence of their occupation can be seen in rock shelters and on scarred trees.

Recognised as one of Australia’s premier bird watching locations, several guests had come for just that. We saw bowerbirds, fairy-wrens, honeyeaters and bush turkeys busy at work, building their mounds for the incubation of their eggs while squawking black cockatoos nibbled away in the tree canopy.
Next morning there was an unmistakable odour of burning toast coming from the dining room with an elderly gent manning the slow turning toaster machine with a pair of tongs, seeming oblivious to the slices of charred bread spurting forth as he answered a guest’s query in detail. It was Mick O’Reilly who had come to lead one of the day’s excursions.

Last year Lamington National Park celebrated 100 years, four years after the arrival of the O’Reilly brothers who rode on horseback and settled here as dairy farmers carving out grazing land by clearing vast tracts of dense scrub encircled by forest. To protect the prized hoop pine from illegal logging and to prevent poaching, a national park was declared and the O’Reilly brothers became Queensland’s first park rangers.
Many kilometres of walking tracks were built through the park during the 1930s to provide employment during the Great Depression, with the 23-kilometre Border Track the most famous.

On our final day, Lauren and I joined a Segway ride travelling through open eucalypt forest, on winding dirt tracks and creek crossings, to Moran’s Falls. That night, our last excursion turned out to be my favourite. We returned to Moran’s Falls now magically transformed to view the colony of thousands of glow worms that light up a grotto. Sitting quite still, our guide Justin recounted Aboriginal legends, his commentary interrupted by the distant call of the nocturnal marbled frogmouth.
As we drove back to the Gold Coast, passing place names such as Stockyard Creek and Duck Creek Road, and as day turned to night, the neon lights were flashy and bright in stark contrast to the glow worm grotto’s gentle twinkling lights.
***
Fact file
Getting there
Transport to O’Reilly’s can be arranged from the Gold Coast with David Strong, E: transfers@mountaincoach.com.au
Where to stay
The Hilton Surfers Paradise has stunning views overlooking the beach. W: www.hiltonsurfersparadise.com.au
O’Reilly’s Rainforest Retreat offers luxury villas (ideal for self catering), suites, mountain or garden view rooms and single rooms. Excursions and activities for all ages are offered with an environmental focus. W: www.oreillys.com.au
Weather
The wet season spans November to March. Strenuous bushwalks are advisable between April to September. Bring warm clothing.