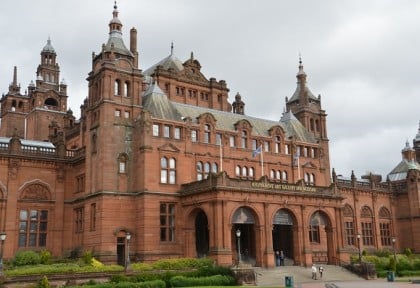 You can mix single malt whisky with only two things: a drop of water, or more whisky. So we are informed by our guide Katie as we tour the Glengoyne distillery located just outside the city limits of Glasgow. Her comment not only proclaims the most authentic way of enjoying the alcoholic beverage, but also reflects the humorous side of Scottish character.


A good sense of humour is among the few things which are accepted as uniquely Scottish, others being whisky, bagpipes, kilts and tartans. While exploring Glasgow, Scotland’s largest city, I pleasingly encounter all of these in high proportions.
Cushioned on the banks of the River Clyde, the grid-patterned Glasgow landscape architecturally presents a wonderful mix of old and new. Though the city is said to have been born almost a millennium and a half ago, it rocketed into prosperity in the 18th century with the Industrial Revolution. Wealth started pouring in from thriving cotton manufacturing, ship building and heavy engineering works. Glasgow soon became an industrial giant and an epicentre of engineering skills.

The economic success powdered the city centre and suburbs with grand neoclassical buildings that demonstrated architectural ingenuity. Many of them still exist and fascinate the modern generation, with the most outstanding being the City Chambers. Dominating George Square, the heart of Glasgow, this edifice of Italian Renaissance style was opened by Queen Victoria in 1888. Guided tours are available to take visitors through the interiors where the entrance hall’s vaulted ceilings, Venetian mosaics and the murals in the banqueting hall, command appreciation. The other nearby buildings that draw attention are the former Post Office, Merchant House and Royal Exchange Building which now houses the Gallery of Modern Art.

However, most worth admiring for architectural buffs are the works of local boy Charles Rennie Mackintosh. An innovative architect, at the turn of the 20th century Mackintosh introduced a new style in building design, internationally acclaimed as ‘Glasgow Style Art Nouveau’. His legacies can be spotted all over the city and many travel to Glasgow just to see them in detail and understand his style. The Glasgow School of Art is the most celebrated work of his illustrious career. This institution was built between 1897 and 1909 to a design that he submitted to a competition. Some of his other distinguished works are the buildings for the Glasgow Herald newspaper, which was his first major design in 1893, the Willow Tea Rooms and the Queens Cross, the only church designed by the legendary architect.
With the decline of the ship building industry and other engineering works, Glasgow was immersed into darkness for a period, but has again blossomed with a new lease of life showing boldness in everything from architecture and fashion shopping to luxury accommodation and fine dining.
The old shipyards and docklands have been reclaimed and are now dotted with commercial, residential and leisure outlets. The former Merchant City, where sugar and tobacco merchants traded since the 12th century, has been rejuvenated with trendy cafes and brasseries. Shopping at Buchanan Street and Sauchiehall Street competes with London’s Oxford Street. The design of the Riverside Museum and Science Centre gleams with avant-garde thinking. All this 21st century progress led to Glasgow hosting the 2014 Commonwealth Games.

Cultural aficionados love this city, which is home to more than 20 world-class museums and galleries showcasing a diverse range of exhibits from European classics at the Kelvingrove Art Gallery and Museum to cutting-age contemporary works at the Gallery of Modern Art. Riverside Museum is the ideal venue to learn more about the city’s industrial heritage, while Glasgow Science Centre introduces visitors of all ages to simple science and engineering fundamentals.

Buskers playing bagpipes will thrill music lovers. The National Piping Centre is the obvious choice for those keen to gain an insight into the history and status of bagpipe music. A well-experienced bagpiper takes you through the rich history of Scotland’s national musical instrument. The Museum of Piping holds three hundred years of piping heritage. Among several exhibits the most outstanding is a 250-year-old Highland bagpipe chanter, said to be the oldest of its kind in the world. The best part of the guided tour comes when the bagpiper plays some traditional Scottish music live.
Glasgow is often referred to as the ‘City of Music’, hosting over a hundred musical events every week; the music business adds around 75 million pounds per year to the Glasgow economy. However, the overall music scene stretches across a much wider spectrum from classical and contemporary to Celtic and country to cater for every taste and fascination.

‘People make Glasgow’ is the slogan of the Glasgow City Marketing Bureau. Most visitors will agree. Glaswegians are the friendliest bunch of people, always ready to warmly welcome anyone stepping into their city. They use their sharp wit to connect with people. When their wittiness is compared with that of Edinburgh, they respond by saying, “People of Glasgow have a better time at a funeral than people of Edinburgh have during a wedding”. Unquestionably that’s the spirit of Glasgow – to have fun whenever, wherever.

Getting There
Fly Qatar Airways (www.qatarairways.com) from Sydney, Melbourne, Adelaide or Perth, via Doha, to Edinburgh from where Glasgow is only an hour away by train, bus or taxi.
Accommodation
Established inside a former Greek Orthodox Church, Malmaison Hotel (www.malmaison.com), offers super slinky rooms, spectacular food and convenient location.
Good Eats
The Gannet (www.thegannetgla.com) for seafood, Gamba (www.gamba.co.uk) for fine dining and Mister Singh’s India (www.mistersinghsindia.com) for curries.