Exploring the tropical magic of the Marquesas in French Polynesia 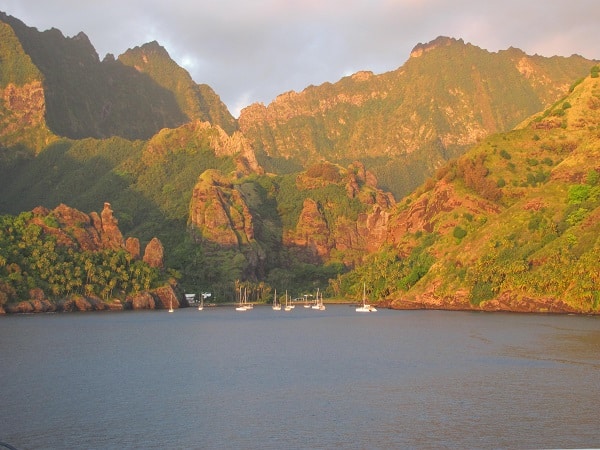 With a surface area the size of Europe, French Polynesia consists of 118 islands that dot the Pacific Ocean forming five archipelagos, including the remote Marquesas.
Having long been known as Henua Enana (Land of Men), 1450 kilometres from Tahiti, the Marquesas comprise 12 islands, six of which are inhabited.
French Polynesia is part of the cultural zone called the Polynesian Triangle – between Easter Island, New Zealand and Hawaii – populated after successive waves of migration from South East Asia that began over 30,000 years ago by crossing the oceans in large double hulled canoes.
In 1595, the Spanish explorer Álvaro de Mendaña de Neira entered a small bay and named the island group Las Marquesas in honour of his patron, Marqués de Mendoza, Viceroy of Peru.
Later explorers included Wallis, Cook, Bligh and Bougainville, and after several skirmishes with the British, French Polynesia became a French protectorate in 1842.

Marquesas Maraes
From the lofty deck of the La Veranda restaurant onboard the cruise ship the Paul Gauguin (named after the French artist), I was looking back across to the beach on the island of Nuku Hiva where I had just come from.
Dark ponies were galloping along the water’s edge, being ridden bareback by local children. Boys had lines cast out to catch fish from the pier and I could hear the distant sounds of drumming.
That morning I had walked to the delightful Notre Dame Cathedral, built from timber and stone, bought a stamp for a postcard, visited a handicraft market and stopped by a small museum, maintained by Rose Corser, somewhat of a legend in these parts, who had sailed here from California some decades ago and stayed, opening an inn and bar that became a meeting point for yachties from all over the world.
Rose is an avid collector of exquisite woodcarvings and jewellery, some of which is for sale.
I couldn’t return home without a souvenir, so I returned that afternoon on the ship’s tender boat retracing my steps along the beach.
The drumming grew louder. Across in the Marae, or community hall, women were dancing by swivelling their hips in a way I never could and men were drumming at high speed quite in contrast to the more subdued performances I’d seen so far.

Characterised by lush tropical jungles, with steep cliffs, narrow ravines and deep valleys, much of the terrain is mountainous and inaccessible, with waterfalls, coconut groves, giant banyan trees, tikis – as the stone carvings here are called, more ancient that those found on Easter Island, and both golden and black sand beaches.
Roads are often little more than dirt trails, villages are neat, with gardens of mango and banana trees, flowering hibiscus, frangipani and brightly painted timber houses in pink, lime green, yellow and red.
Lush and stunningly beautiful, the Marquesas lured those searching for paradise including the artist Paul Gauguin, and writers Herman Melville and Robert Louis Stevenson.
Local culture thrives, with residents decoratively tattooed and artisans creating tapa cloth, wood carvings, stone sculptures and jewellery made from bone or seeds.

Island hopping
The Paul Gauguin cruise ship visited four of the islands of the Marquesas – Fatu Hiva, Hiva Oa, Tahuata and Nuku Hiva. On Fatu Hiva I visited a church with elaborate wood carvings, a small market, saw large quantities of coconut drying in the sun, and followed a road that eventually ended overgrown by jungle.

On the island of Hiva Oa, the settlement of Atuona fronts a long crescent shaped beach, with several timber churches and a small cemetery that overlooks the ocean where Paul Gauguin is buried beneath a gnarled frangipani tree.

The house where he lived is now a museum. I attempted to walk to the next village, but found it too far, accepting a lift back with a friendly local returning from the market, sharing the seat with a large bunch of ripe bananas.
At Snack Make Make, the name of a cafe, I met two New Zealanders who had been sailing since 2009.
On Tahuata I joined an excursion with the ship’s onboard lecturer, Mark Eddowes, an archaeologist originally from New Zealand, who captivated us with his detailed knowledge and engaging personality – looking the part with a deep copper tan, bone earrings, floral shirt and his hair tied back in a ponytail.
Setting off in open jeeps, we went along a bumpy dirt track past lush forests and waterfalls to see tikis dating back a thousand years.
To reach the islands of French Polynesia, most travellers fly to Tahiti, arriving at the capital Papeete, a somewhat ramshackle and scruffy town, with a pleasant harbourside promenade, some splendid examples of French colonial architecture and a lively market that sells fragrant soaps and oils made from coconut oil and the fragrant tiare flower.

A short drive away is Point Venus where Captain James Cook landed, Matavai Bay where Captain Bligh anchored the HMS Bounty in 1788, and the James Norman Hall museum, the former home of the co-author of the Mutiny on the Bounty. A gem, it contains paintings, historic photographs and anecdotes from Hall’s life.
It was the naturalist on the voyage of the French explorer Bougainville who first described Tahiti as utopia and while that description may no longer apply, paradise and a carefree existence can be found in the Marquesas, about remote as you can get from anywhere.
Six weeks following my return, the postcard I had sent from there finally arrived home.

Travel Notebook
Getting there
Fly from Australia via Auckland, New Zealand to Papeete with Qantas/Air Tahiti Nui or Air New Zealand/Air Tahiti Nui. This may require an overnight stay on your return. From Papeete, Air Tahiti Nui flies to Hiva Oa and Nuku Hiva, though the best way to explore the Marquesas is by cruise ship.
Where to stay
For an overnight stay in Auckland, Accor Hotels is well represented and covers all budgets, with the Mercure, Sofitel and Pullman recommended (www.accorhotels.com).
The affordable airport bus runs frequently. In Tahiti, the stopping off point for joining a cruise, I spent several days at the Radisson Plaza Resort Tahiti.
With expansive grounds on a black sand beach, the resort has a spa offering soothing Tahitian massages, a free shuttle bus, free wi-fi, activities program, fabulous Polynesian cultural shows at no charge on Thurs and Friday nights and a great bar for watching sunsets (www.radisson.com/tahiti).
Arrange for an airport pick up with South Pacific Tours (www.southpacifictours-tahiti.com)
The luxurious cruise ship the Paul Gauguin can access remote destinations that larger cruise ships can’t and with a maximum of only 332 passengers onboard, it has a relaxed ambience with plush, elegant interiors, exemplary service an accent on French cuisine and fine wines included (www.pgcruises.com)
Insider’s Tip
French Polynesia is very expensive, but costs can be minimised. Head to one of the big supermarkets outside town like Super U for deli items and buy freshly baked baguettes.
Banks in Tahiti charge around $7 per foreign currency transaction, so opt for ATMs. Onboard excursions offered by the Paul Gauguin were often outstanding, especially those led by Mark Eddowes.