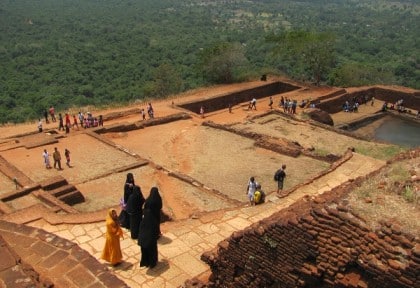 At dusk on my first day in Colombo, when the air smelt beguilingly of cinnamon and the salty sea, I headed for Galle Face Green, a strip of well-trodden lawn with vendors dispensing ice cream, nuts, hot snacks and freshly grilled seafood and where locals mingle, play cricket and fly kites. Then I returned to the majestic Galle Face Hotel, opened in 1864, as the sun slipped away over the Indian Ocean.
This was how my journey to Sri Lanka, an island the size of Tasmania, began. Colombo provided the perfect introduction – a city with lakes, gardens, shady tree lined streets, grand colonial buildings and bustling markets at the Fort and Pettah Bazaar.
Joining a small tour group of travellers from Denmark, Germany and the UK, we set off in a minivan, heading in a clockwise direction beginning with the ruins of Anuradhapura, a sacred city of palaces, temples, monasteries and bell shaped stupas some 60 metres high. Established in the 3rd Century BC, Anuradhapura flourished as a political and religious capital until 993 AD when it was invaded and later abandoned.
The second capital was the walled city of Polonnaruwa, built in the 11th and 12th centuries AD, before it too was ransacked by invaders and forgotten for 700 years. Nearby, the cave temples of Dambulla, dating back to the 1st century BC, have murals and statues of Buddha including a 15 metre long reclining Buddha.

But it was Sigiriya that I found most astonishing, an extraordinary feat of engineering built in 471 AD by the ruthless King Kassapa. A broad avenue flanked by moats, ramparts and cooling water gardens, leads towards the massive granite peak that dominates the central plains jutting upwards of 180 metres. Halfway up the steep ascent, frescoes of nymphs are painted on the walls of a cave accessed by climbing up a spiral staircase that clings precariously from the side of the steep precipice. Further up are two enormous lion paws that guard the entrance of the once impenetrable royal palace. From the summit the view of the central plains is spectacular.

From here we travelled to Kandy, the last capital of the Sri Lankan kings, a city with a serene lake surrounded by mountains, hotels steeped in history including the Hotel Suisse, Queen’s and Olde Empire, and a market with fruit and vegetables, spices and tea.
Within the Royal Complex is the Temple of the Tooth, an ornate shrine housing what is believed to be Buddha’s tooth. For a glimpse of the golden casket containing the relic, I was shuffled through a gently elbowing line and into an adjoining hall for a performance of traditional Kandyan drumming.

Culture is also on show at one of many traditional dance shows with hypnotic drumming, acrobatics and back flips culminating in wince-inducing firewalking.
With guards and conductors wearing crisp starched uniforms, we departed for Nuwara Eliya as the train skirted around narrow terraces offering superb views as it clawed its way towards the highlands carpeted in tea plantations.

Founded as a hill retreat for the British, many colonial era buildings remain with the Grand Hotel and St Andrew’s offering high tea with an assortment of sandwiches, tasty treats and the finest tea. At the Hill Club, founded in 1876, the walls of billiard rooms, dining rooms and long empty corridors are lined with mounted hunting trophies and memorabilia harking back to earlier times. Enveloped by mist that descends in the evening, temperatures plummet and open log fires provide a warm repose.

From the mountains we descended to lowland rice paddies, villages and market towns to Udawalawe National Park. Here we hopped aboard a safari jeep to view wild boars and herds of elephants grazing on the open plains, and crocodiles basking by the water’s edge before continuing our drive towards the coast.

An ancient trading port for cinnamon, sapphires, peacock feathers, and ivory, Galle was settled by the Portuguese in 1505, and later by the Dutch and British. Villas and warehouses have been faithfully restored and among the labyrinth of alleys and narrow streets I found boutique hotels, spice warehouses, cafes, and shops selling woodcarvings, gems and Dutch antiques.

It was while walking along the beach at Hikkaduwa, our final destination, that I reflected on what I had enjoyed most about Sri Lanka.
At Nuwara Eliya, women from a cooperative were cooking hoppers and other snacks in an open shed. I was invited to share a table with a school teacher and her family who explained to me all the delicious treats I had just purchased. I met many local people like her who, through a simple act of kindness, made me feel welcome in their country and it’s that I remember most of all.


Dambulla/Sigiriya: Thilanka Resort and Spa or the Heritance Kandalama, designed by Sri Lanka’s most renowned architect Geoffrey Bawa.
Nuwara Eliya: Jetwing St Andrew’s.
Galle: With exquisite interiors, the Galle Fort Hotel was awarded a UNESCO award for heritage conservation.
Dining
Sri Lankan cuisine is one of the most complex cuisines in Asia, drawing on influences from India and a long legacy of trade with Asia, Holland and Portugal. Start the day with a breakfast of tropical fruit and thick buffalo curd and kithul treacle.
Shopping
Homewares, traditional woodcarvings and fabrics such as Sakura Batik in Hikkaduwa and Praba Handicrafts. There are numerous tea centres in Colombo selling some of the world’s finest tea.
Sri Lanka offers Ayurveda treatments and massage. I tried several and found Lotus Lanka at 353/1A Galle Road, Hikkaduwa exceptional.
Insider tips
Lodge an electronic travel application online prior to departure and print a copy. Cost for a single entry tourist visa is USD$35. eta.gov.lk
Entry fees to historic sites and national parks are generally US$25-30.
Seek out charities such as NewUse Organisation in Hikkaduwa that sells recycled clothing and books to raise funds for worthy causes.
- Advertisement -
Share
WhatsApp
Facebook
Twitter
Linkedin
Previous articleYoga and a healthy pregnancy
Next articleThis is our city in summer