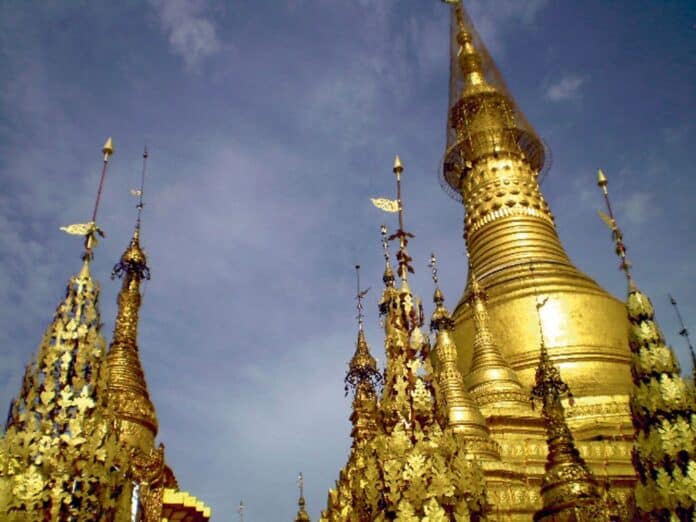 Reading Time: 4 minutesAs this mysterious country opens  up to tourism, visitors are in for a spectacular journey of discovery
through its natural and man-made wonders as featured in our November (1) 2012 issue

It was a momentous day. As I stood on the ship’s observation deck, travelling upstream on the Irrawaddy River from Yangon to Mandalay, watching life pass by and pagoda after pagoda come into view, one of the passengers onboard came rushing over to me. On his shortwave radio, we were able to hear the historic announcement by Aung San Suu Kyi, that she had dropped her opposition to travellers visiting Myanmar (Burma). For years I’d grappled with the moral dilemma faced by many travellers, of whether or not to go there.
It was after my arrival in Yangon, formerly known as Rangoon, that after a long day of exploring the sights on foot, I caught a taxi back to my hotel. The taxi had no covers on its seats, just springs and I had to hold the door shut. The driver was an affable young man who told me he had studied Engineering and since graduating, was fortunate to find work as a taxi driver. He said he lived in hope. The Burmese are perhaps the most reserved people I have ever encountered and while that conversation was brief, it was one of the few I had during my three week stay there.
Visiting Yangon is like stepping back in time, as the city offers a glimpse of what other great Asian cities were once like, with many historic buildings, albeit decrepit and crumbling, including splendid examples of British colonial commercial architecture along the waterfront, interspersed with pagodas, temples and Chinese shop houses that come into view.
I spent several days exploring Yangon and while I visited the main sights; pagodas including the Shwedagon Pagoda, Chinese and Indian temples, the treasures at the National Museum and Bogyoke Aung San market, my favourite experiences were with the local people I met. At the Feel Myanmar Food restaurant, staff brought me tasting portions that were my first introduction to Burmese cuisine, more subtle than those found in neighbouring countries. The green beans infused with a crunchy peanut and chilli sauce was exceptional. The restaurant was noisy and packed.
With street signage in Burmese and with maps deficient in detail, it required the utmost concentration to avoid getting lost. While attempting to find Ngahtagyi Pagoda, an elderly man motioned for me to follow him. And so I did, for perhaps a kilometre, climbing hundreds of steps along the way. When we arrived, he gestured for me to enter and as I turned to thank him, he was gone.
After collecting my beautifully stitched silk shirts from Globe Tailors, I joined Pandaw Cruises for a 14 night journey travelling upstream to Mandalay.
At 2170 kilometres long, the Irrawaddy is Myanmar’s longest river. Once referred to as the ‘Road to Mandalay’, it is still used as a commercial waterway. The Pandaw II harks back to a bygone time, reminiscent of the original paddle steamers built by the Irrawaddy Flotilla Company established in 1865 by Scottish merchants that became the largest privately owned river fleet in the world, with 602 vessels by the 1930s. George Orwell, William Somerset Maugham and Rudyard Kipling all undertook journeys by paddle steamer in Burma. Tragically, all were destroyed during World War II.
At every village and riverside town there were ramshackle warehouses, rickety jetties, dirt roads and dwellings made of thatch and woven bamboo. Young children swam while their mothers washed clothing on stone slabs and men wearing the traditional Longyi, or sarong, fished from canoes or steadied wooden ploughs pulled by oxen.
We visited Twante village to observe the famed clay water pots being made by hand. At Prome, we viewed a 5th-8th century archaeological site of early Buddhist artefacts. We visited the forts of Minhla, and many spectacular pagodas, including Myat-thalon Pagoda, built with solid gold bricks. We explored the most renowned of the 3,000 pagodas and temples at World Heritage Listed Bagan, the capital city of Burma from 1044 until 1287, and the largest ancient Buddhist site in the world. In Mandalay, a dusty town so celebrated by Kipling and the last capital of the Burmese Kings, we visited pagodas, a beautiful teak carved monastery and Mandalay Palace.
A highlight was the wonderful sleepy river town of Salay, with a beautiful teak museum, monastery, pagodas and colonial architecture. It was here that an impromptu band began playing, using rudimentary instruments and an old gramophone connected to a car battery for amplification. A crowd soon formed and the music was mesmerising.
I enjoyed visiting markets to engage with the local people and exchange the greeting of “Mingalabar” or hello. And as with any country, there are traditions that for the first time traveller there are new and fascinating. At markets, I would hear “Thanaka” a paste liberally applied to the faces of women, children, even men. Many market stalls sold bundles of cuttings or small logs of timber with a mild fragrance. I asked one of the stallholders, “Thanaka?” Laughter ensued and the young woman demonstrated how it is made. With a little water, a yellow paste is produced by grinding the timber cutting on a stone slab called a Kyauk Pyin and applied to cheeks to make decorative patterns. This prized beauty product comes from the forests and has been used for over 2000 years.
On my final evening, I visited the majestic Shwedagon Pagoda once more, a perfect way to conclude my journey to Myanmar. It was while listening to the gentle humming of mantras by young Buddhist monks that I realised that while the immense beauty of Myanmar is evident everywhere, it was only the young girl selling Thanaka who I ever saw laugh. I met people who were gentle and helpful, kind and with a generosity of spirit. But a country without hope is a country without joy and with that I felt a great sadness for its people. I hope that by travelling there, we will provide reassurance that Myanmar was never forgotten.