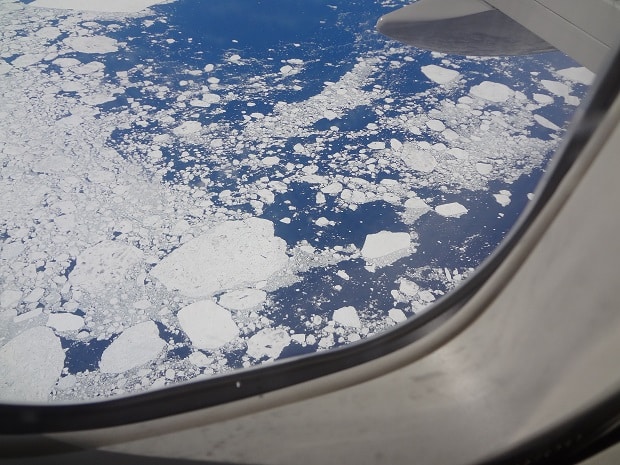 Reading Time: 5 minutesAn aerial tour of Antarctica is a great way of beating the heat in sunny Adelaide

Three weeks into the New Year and Adelaide suffered a scorcher with the mercury tipping to over 40o every day. While most preferred to cocoon themselves in air-conditioned comfort or dash out the beach to cool their heels, one Adelaide woman decided to beat the heat by flying over the Antarctica.

“I am not a thrill seeker, far from it! Next to my profession, my love includes animal welfare, environment and travel”, revealed Jayalakshmi, a GP of 42 years standing, flying on her own during most of those years. “My TV fare is limited to such programmes and Attenborough is a permanent guest in our living room. After seeing his Frozen Planet I dreamed of the day when I would see the Antarctic. Knowing my passion, my children gave me a surprise birthday gift when the once-a-year summer flight was advertised”.

Chartering Qantas planes, Antarctic Flights organises only one or two flights from all capital cities to the polar region during the summer.  These flights are unique: no checking in, no baggage to board, and the destination is marked as a ‘Mystery Flight’. Two boarding passes are issued, each with a different seat number since passengers are asked to swap seats while the aircraft is flying midway ‘over the ice’, to allow most, if not all, of them a window-seat view of the wonderland below.

This year’s summer flight commemorated the centenary of Dr Douglas Mawson’s return to Adelaide in 1914, after his three-year exploration of Antarctica, Australia’s first. The 747 flight on January 19 with 320 seats was fully booked.

A Business class seat burns a $7000 hole in one’s pocket, while the Economy ranges from $1200 to 2800 for the 12-hour non-stop flight from Adelaide. Those who have booked window seats and the adjoining three seats can swap seats, but those in the middle seats don’t swap and are free to roam around and peer over those sitting by the windows.

The pilot chooses the best possible route from among the 19 flight paths prepared by Qantas, depending on the day’s weather conditions. After flying at around 30,000 feet for some three hours, the aircraft descends and flies some 2000ft above the highest point on the ice cap at a slower speed, to provide maximum viewing opportunities of the snow-capped continent. Two experts who know the polar region like the back of their palm due to years of research or work there, provide a ‘flying’ commentary on all aspects of the region and the sights below visible from both sides of the plane.

Antarctica with its 13.5 million sq kms is nearly twice the size of Australia, with 99.5% of its area covered in ice ranging in thickness from one to four miles. It contains nearly 70% of world’s fresh water. The lowest temperature recorded is 90o, making me wish some of that coolness blows our way in this scorching summer. Antarctica was once part of the super-continent called Gondwana, from which South America, South Africa, India and Australia split and moved northwards some 50-plus million years ago. So India can be justified to have some claim to this ‘motherland.’

There are 40 research stations manned by various countries with some 4000 personnel during summer, reducing to 1500 in winter.  India’s Antarctic programme, promoted by Indira Gandhi, began in 1981. Its research station Dakshin Gangothri was replaced in 1990 by Maithri and now with Bharathi added, it has joined nine other countries to have multi-stations. So far, over 30 Indian expeditions have visited Antartica.

By the way, there are two ATMs down there, I am told. To dispense ‘cold cash’?

The rest of the story is best told in Jaya’s words:

After flying south-easterly for about three hours past Tasmania and then Macquarie Island, we began to see icebergs of various sizes floating in the sea, indicating that we were nearing the iced continent.

During winter, the sea freezes completely, and heavy snowfall near the coast compacts to form glaciers.  In summer, the sea ice thaws and the glaciers melt, with chunks of ice crashing and floating as icebergs.

We saw cracks on the ice sheet as the plane flew over Commonwealth Bay, from where Mawson started his exploration. The South Magnetic Pole (not to be confused with the South Pole) is a moving pointer and was currently close to the coastline near the Commonwealth Bay, the windiest place on Earth.

As we flew further into the continent it was one mass of ice, not just a flat sheet but with peaks and troughs, some peaks rising up by several hundred metres. As the plane passed over the French research station Dumont Durville, we sighted supplies being unloaded from a ship. However, we missed the Russian ship that had been wedged in the ice for weeks, as it had been released just two days earlier. Flying over the Australian research station Casey, the captain asked the staff of 55 down below, including 17 women, via radio, about their life and plans for Australia Day.

The call for the seat swap-over, I felt, came somewhat late. Some of us in the aisle seats had less time to enjoy the view from the window. Sausages served as lunch for this vegetarian, although my requirement was notified a week ahead, was a sore point. After a half an hour wait and with a cold stare, some vegetarian dish appeared with the hostess remarking twice that some crew had to sacrifice her food to meet my request.

The crew showed more interest in selling souvenirs, but they had no markings to show that they were from an Antarctica flight. When I suggested there could have been some relevant inscriptions, the crew replied that there was no time to organise such things. Chinese suppliers could have easily obliged. Aren’t these flights run every year and booked ahead?

Before the flight, I felt, some time could have been spent to offer an insight of the significant sights on our tour on the in-flight screens, since they go blank when the expert starts commenting during the flight. Some synchronization would have helped. Listening intently is also hampered by people scurrying to nearby windows. But that is part of the game!

Notwithstanding such human imperfections, Nature put on a good show. The massive ice cap is an awesome spectacle, although what we saw on this flight is but a small slice of a huge continent. It was a dream come true for me, thanks to my children!