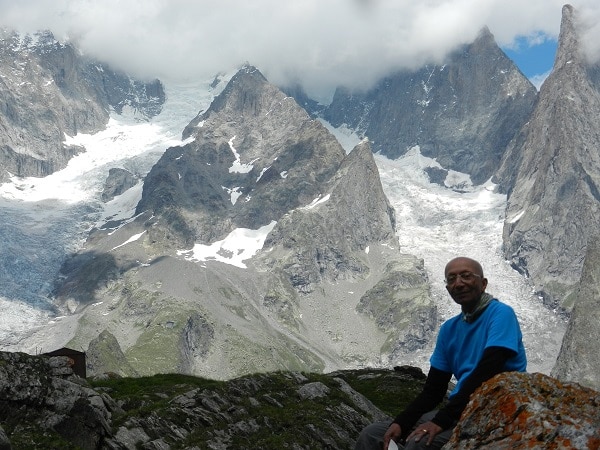 Walking 16-20 kilometres day after day with 1000-metre daily ascents is not everyone’s idea of fun. But, for me, it was a dream come true, a longing fulfilled and happiness to look back on.
Ever since the idea of trekking entered my head, it was the Tour du Mont Blanc I had wanted to experience because it is perhaps the oldest and most iconic of treks in the world.
Many do this trek on their own but I was in a guided group which comprised six women and me. The chances of such a skewed mix are small but lightning has definitely struck the same place twice for me:
on a previous trek, I had been in a group of eight with me being the only male. Would my wife allow me to go on another trek, I wondered.

But those concerns apart, sharing meals, discomfort, long walks and pleasant exchanges easily creates an interesting cohesion that kept us going for the duration of the trek.
Our first day dawned with low clouds as we started the walk from Les Houches in France. The track zig-zagged steeply higher as the weather worsened. The fabled views were obscured as a cold, misty drizzle saw us all put on wet weather gear that must be carried at all times.
A curious feature was the tiny sheds in the gardens of houses in this area. As Alpine houses are typically built of timber, people use these sheds to store valuables that would remain safe in the event of fire destroying the house. There was a greater fear of fire than of theft in these trusting mountain communities.

Easily the hardest day for me was the second, with an ascent of 1200m over a 22km walk. A clear, sunny day saw us on a steady climb through beautiful woodlands before reaching a flat area of meadows and cattle pastures. Ahead, the mountain starts to show its grandeur and far, far below lay our starting point, now no bigger than a dot. Past the tree line, there were massive boulders lying around and soon we could see patches of snow amongst the serrated, bare fang-like peaks. As I brought up the rear of our party, I was glad to see our destination, the Refuge de la Croix du Bonhomme at 2400m, as it came into view.
Our accommodation was a mix of hotels and, in isolated places, Refuges. In Refuges, almost every inch of space is given over to sleeping and eating arrangements. Bunk beds are crammed into the smaller rooms. Larger unisex rooms have the interesting feature of a raised platform with narrow mattresses placed next to one another over a huge area. Ear plugs are recommended and if one gets up at night, it is helpful to remember the location of your spot! The dining rooms are all tables and chairs in a trestle style and at 2500m, I was impressed to be provided with a four-course meal.

Once below the tree line, the track wound its way through breathtaking alpine flowers. For me, these were probably the highlight of the trek. All possible colours as far as the eye could see. At lower levels, the flowers were no longer ground-cover but shrublike, still retaining their profusion of colour and shape. The Edelweiss flower, which is quite rare now, is protected and not to be plucked. Wild strawberries bursting with flavour were a real treat.
We crossed the border into Italy at a very windy Col de la Seigne (2516m), heading for Rifugio Elisabetta. The track changes constantly from shale to rock and follows a line of cairns. All through the walk, we encountered mountain streams. One or two had bridges, but mostly it was a case of stepping stones across fast-flowing water. One false step could have had dire consequences but our ever alert guide often provided a helping hand, making for a safe crossing.
We were heading for our rest day in Courmayer, a stylish Italian town. The walk through Val Veni has views of eye-catching mountain peaks and glaciers. Walking along the valley floor, I saw marmots on guard scurrying off, before I could even reach for my camera. The descent into Courmayer was long and steep and I was thankful for all the training I had put in, without which the walk would have been impossible.

Coming out of Courmayer, the climb is reputedly the toughest of the trek with endless zig-zags to reach the high point through a forest of trees and then eventually down to Rifugio Bonatti. After we crossed the Swiss border, sure enough, there was a sight of very pretty cows ringing their bells. Champex has a delightful lake and I recall my dinner of freshly caught trout and a pleasant walk back to the hotel in good company.
The views on this trek vary depending on where you are. We had seen the Rhone valley of France, looked at Swiss villages, seen Mont Blanc covered in snow, moraines and glaciers and bare-faced mountains. Over time, walking was becoming a habit even though the backpack never seemed to get any lighter.
It had been many days since the start. We had been blessed with good weather. What was previously anticipation with some nerves, now turned into sheer pleasure and a sense of achievement. I said goodbye to my group and au revoir to delightful Chamonix.