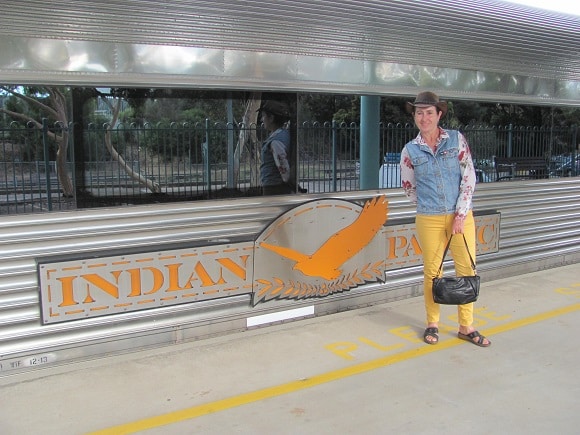 Proceeding along Broken Hill’s main street, I asked a local, wearing the distinctive broad bushman’s hat, where I could get good coffee. ‘Silly Goat’ was a response open to interpretation, though soon afterwards I found the cafe and enjoyed a large flat white. This was the first of four whistle stops on the Indian Pacific.
The four day journey from Sydney to Perth is Australia’s transcontinental east-west line, a railroad that spans 4352 kilometres from the Pacific to the Indian Ocean, enabling passengers to traverse from one side of the country to the other.
With a firm grip on the consciousness of Australians, a transcontinental rail link has operated since 1917, initially constructed using picks, shovels, horses and camels. With the track having different rail line gauges due to a lack of agreement between the states of narrow, standard and broad gauges, five changes were required en route. It was not until 1969 that a standard gauge rail line was completed ushering in a new era of providing the definitive way to explore Australia’s interior. From the Blue Mountains across the outback to Broken Hill, past rolling green hills towards Adelaide to the expansive Nullarbor Plain, through the goldfields of Kalgoorlie and finally meeting journey’s end in Perth.

At 2.55pm on a hot summer’s day, the Indian Pacific, measuring 567 metres in length, rolled out of Sydney’s historic Central Station. I’d chosen Gold Service, nudging the top of the comfort classes, with a cabin fitted with a large viewing window and small en-suite bathroom. Wood panelling, muted tones and etched glass give an aura of luxury to otherwise utilitarian carriages.
Rolling along at an average speed of 85 kilometres per hour, most passengers left their doors ajar, mingling in the corridors or socialising in the lounge, creating a friendly mood. There were 161 passengers on this trip and it was time to meet some of them over a welcome drink in the lounge. Asked why they had joined the journey, twin sisters Betty and Elma recalled having travelled on the legendary Ghan and wanted to experience more.


Beyond the lushness of the Blue Mountains, we passed farms of wheat and sheep, with desert scrub of gnarly bushes, grassy stubble and dry creek beds soon appearing just as the sun began to set. Emus and grey kangaroos were visible as well as many species of birds, including eagles and cockatoos.
Platinum and Gold Service includes all meals. Served on heavy china with starched white tablecloths, dinner included kingfish or kangaroo steak and a vegetarian option accompanied by quality Australian wine or beer. After retiring to my cabin, now turned into a cosy bed, I gazed out the window for hours. Australia’s interior is vast and empty. There are no roads or signs of human habitation – only a night time sky brilliantly glowing with stars.

Early next morning in Broken Hill, the Trades Hall and the many historic pubs were little changed since my last visit. Returning to the train, breakfast was a treat. “I’m not here to do cornflakes!” exclaimed the American. Would you prefer the poached peach and passionfruit compote layered with vanilla bean yoghurt, toasted almond and hazelnut crumble? Or the honeydew melon and native currants tossed with pistachio vinaigrette? Full breakfast was also available, and for lunch it was smoked lamb with zucchini and bean salad or roasted pumpkin and artichoke tart.
Curious to visit the rest of the train (Red Sleeper class has a cafeteria), the carriages occupied by a passenger who crocheted flowers for the entire journey, alongside backpackers and students sprawled out, legs and arms hanging across their seats, looking decidedly less comfortable than the rest of us. At the premium end, two carriages were occupied by16 passengers with luxurious cabins.

Later that afternoon the Indian Pacific pulled into Adelaide, with imposing 19th-century sandstone architecture, parklands, broad streets and public squares laid out in a grid pattern ideal for exploring on foot. There were several tours including an excursion taking in the city sights, though I opted to walk to North Terrace to visit the South Australian Museum, with the world’s largest and most significant collection of Aboriginal artefacts.
Further along North Terrace is the Adelaide Botanic Gardens established in 1855 with the Palm House, an exquisite Victorian glasshouse imported from Bremen, Germany in 1875. Turning back, I walked along the banks of the scenic River Torrens passing Adelaide Oval, steeped in cricketing and Aussie rules football history.
Then I ventured to Central Market, boasting everything from the freshest fruit, cheeses and smoked German sausages. I departed with apricots and plump strawberries before dashing to Rundle Mall, the main shopping precinct. Faced with chocolate choices including Haigh’s and Koko Black, I opted for the utterly divine Stephen ter Horst chocolatier.
I woke after a comfortable night’s sleep on board. The vineyards, orchards and olive trees had been replaced by a parched arid landscape at its best in the early morning with shades of orange, red and gold.


With the scenery sliding past, the day was spent reading, relaxing and chatting to other passengers, too easy a way to be transported across the treeless plain of the Nullarbor. Derived from Latin and meaning ‘no tree’, this is the world’s longest stretch of straight railway track continuing for 478 kilometres without a bend. In 1841, a young explorer, Edward Eyre, set out from Adelaide to cross the Nullarbor on horseback taking almost five months. Here we made a short stop at the isolated outpost of Cook, a virtual ghost town of four inhabitants and soon afterwards a sign marked the border as we crossed into Western Australia stopping briefly to drop off passengers at Rawlinna Station, Australia’s largest property measuring 2.5 million acres.
Arriving in Kalgoorlie, known for its open cut mine measuring 3.6 by 1.6 kilometres, we toured the town to absorb the local flavour. Next morning I woke to a fertile landscape of farms dotted with sheep and cattle. The 65-hour journey had come to an end.
A vibrant, energetic city, Perth offers great restaurants, expansive parklands, black swans and vast beaches along a coastline that delivers amazing sunsets.

I visited the Perth Cultural Centre which displays some of Australia’s finest Aboriginal art; the Bell Tower containing the royal bells of London’s St Martin’s-in-the-Fields; and joined a cruise boat along the Swan River to Fremantle, the best preserved example of a 19th century port streetscape in the world with a strong maritime and convict history and great Italian coffee.
But it was time to catch my flight back to Sydney. The enormity of Australia can only be understood by travelling across it and a journey on the Indian Pacific allows you to view the ever changing landscape in considerable comfort. And you get to meet locals like Tony, who had travelled down from Marrakai in the Northern Territory. Asked what led him to travel to Perth, he replied simply, “Bull riding”.
Travel Notebook
The Indian Pacific offers exclusive private carriages, Platinum and Gold Service. Meals, refreshments and off train excursions are included. Only for the hardy, Red Service has reclining chairs. www.greatsouthernrail.com.au
Accommodation
In Sydney the Sydney Harbour YHA and Ibis World Square are good budget choices. The Shangri-La has splendid views of the harbour.
With two services a week during peak season, you can break your journey in Adelaide. The Mercure Grosvenor Hotel or Ibis hotel are centrally located. In Perth, Fraser Suites offers spacious accommodation.
Insider’s tips
Pack a jumper. Generous luggage allowances apply. Aspects Gallery Shop at Kings Park, Perth has a splendid range of Australian made gifts.
- Advertisement -
Share
WhatsApp
Facebook
Twitter
Linkedin
Previous articleGood pain, bad pain
Next articleAsk Auntyji: Bollywood rewind