From history to culture to food, Mexico has an endless list of experiences to offer 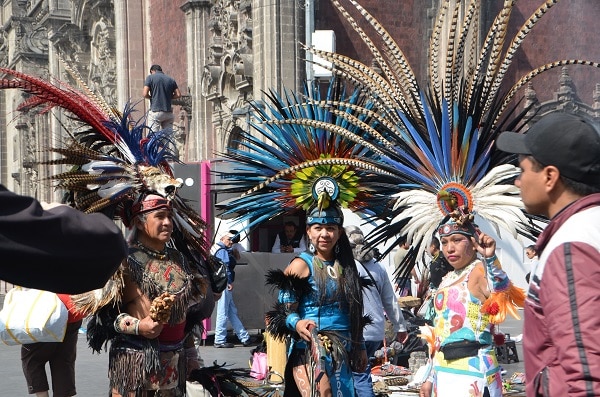 Reading Time: 4 minutesDrawing annually over 35 million visitors, Mexico today is one of the most sought-after destinations in the world. Its capital Mexico City, second largest metropolis in the world, assaults senses with sights, sounds and smells of a huge settlement brimming with history, sanctity, art and gastronomy. Here are the top five experiences on offer that make it a ‘must-visit’, regardless of anyone’s travel style.


Digging history
Mexico City is an overlay of two historical episodes that took place when Spanish conquistadors gained control of the region from the great Mesoamerican Empire Aztec in 1521. Its best understood when visiting the Historic Centre in the heart of the city. Zocalo, a large public square dominates the precinct. It’s surrounded by Spanish built historic buildings, most photographed are the Metropolitan Cathedral and National Palace. The Spanish ruthlessly destroyed almost everything the Aztecs had built previously. However, archaeologists recently unearthed ruins of a temple complex called Temple Mayor, the remains reveal many ideas of the Aztec civilisation, their rituals and lifestyle in particular. The nearby National History Museum is also a great source to dig into the city’s past.

Mexicans are predominantly Catholic, the church is one of the three ‘untouchable’ institutions, other two being Army and presidency. So in Mexico City visiting the churches and understanding Mexican Catholicism is a priority for visitors. The Metropolitan Cathedral featuring a mix of Baroque and Neo-Classical architectural styles deserves a special mention. The city hosts every year several religious commemorations featuring flamboyant parades, dance performances, live music and of course, parties. Visitors from all over the world storm in to take part in them. The two most famous are the ‘Day of the Dead’ festivities in November, a colourful tradition deeply rooted in indigenous culture and ‘Anniversary of the appearance of brown-skinned Virgin Mary’ in December, which is celebrated with pomp and grandeur at the Basilica de Guadalupe, one of the nation’s holiest place. Over nine million pilgrims arrive there during fiesta time.

Indulging in Art
Not many know that the city has the second-highest number of museums in the world. Over 150 of them exhibit treasures from different periods of time revealing the country’s rich historical and cultural past. At the top of the list stands the National Anthropology Museum which has 12 galleries that showcase the nation’s pre-Colombian culture. The largest gallery displays treasures of the Aztecs that include extraordinary samples made from ceramics and stone such as the sundial. Other museums that you must tick off your list are the Diego Rivera Museum, Franz Mayer Museum and National Museum of Art that preserves and exhibits the best of Mexican art. More creations of Diego Rivera, Mexico’s world-famous muralist, can also be seen inside the National Palace.
Visiting Pyramids

Like in Egypt, there are pyramids in Mexico built by ancient Mesoamerican civilisations like the Aztec and Mayan. Their apexes are not pointy but truncated to house temples. These colossal structures are a major attraction of Mexico, the most hyped being the Chichen Itza pyramid in the southeast. No less significant are the Pyramid of the Sun and the Pyramid of the Moon at Teotihuacán. Located 40km northeast of Mexico City, these two architectural marvels dominate the landscape of a lost city that no travel enthusiast should miss.
Eating with locals

Tortillas, tacos, kidney beans and spicy salsa personify Mexican cuisine. There are several restaurants and cafes throughout the city, but some can be tourist traps. So it’s best to follow locals to find authentic Mexican fare. For traditional breakfast Chilpa is popular. Their speciality is ‘chilaquiles’ which are baked tortilla chips served with eggs and sauce toppings. Paramo is a good place for taco meals, Sanborns Café and Café La Pagoda for caffeine intakes while Salon Rios offers an upmarket dining option.

There are even curry joints frequented by brave locals, Taj Mahal and Tandoor being the favourites. And there is no shortage of tequila shots and beer to wash down the spicy food.

Getting there: Fly Virgin Australia (www.virginaustralia.com) with a change of aircraft at Los Angeles