A 13-day luxury road trip through the Balkans – Croatia, Slovenia and more 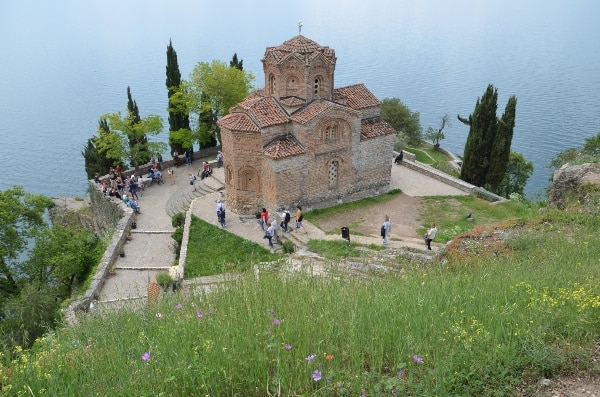 Reading Time: 4 minutesThe Balkan region – named after the Balkan Mountains and comprising of several countries – is fast entering every traveller’s bucket list. Croatia ranks near the top, with Slovenia, Bosnia & Herzegovina, Montenegro, Albania, Macedonia and Kosovo not far behind.
A suitable option of exploring the best from this region, interconnected by an excellent road network, is the fully escorted Grand Balkan Tour package available in Australia from Beyond Travel.


The 13-day odyssey, which involves travelling over 2000kms by road in an air-conditioned luxury bus, starts in Croatia’s capital Zagreb and ends in the nation’s most sought-after seafront destination Dubrovnik. In between are stops at Plitvice Lakes, Trogir and Split in Croatia, Lake Bled and capital Ljubljana in Slovenia, Mostar in Bosnia & Herzegovina, Budva, Kotor, Centinje and Kolasin in Montenegro, capital Tirana in Albania, Ohrid and capital Skopje in North Macedonia and Peć in Kosovo.
The itinerary traverses through lakes, waterfalls, canyons, beaches, palaces, cathedrals, monasteries, walled citadels and bridges and several UNESCO World Heritage sites, listed below.
Nature’s creation – Plitvice Lakes National Park, Croatia

Located 130 km west of Zagreb in a mountainous region, it’s the nation’s oldest and largest national parkland comprising of 16 lakes and several gushing waterfalls, all of which make it a site of exceptional and rare natural beauty. The lake water varies in colour from emerald green and turquoise to deep blue, depending on the mineral deposits underneath.
Palace of Diocletian – Split, Croatia

The Adriatic Sea-fronted Split located in the south is Croatia’s second largest city and most famous for experiencing 1700 years of living history in the Palace of 3rd century Roman Emperor Diocletian, who built a fortified palace-city, continuously occupied since its foundation. The sprawling complex includes several palatial buildings, cathedrals and churches that reflect period styles from Romanesque and Gothic to Renaissance and Baroque.
Historic settlement – Trogir, Croatia

A half hour drive from Split is Trogir, a tiny island settlement which showcases an orthogonal street plan that dates back to the Hellenistic period, later developed by successive rulers with many Romanesque churches and Renaissance and Baroque buildings from the Venetian period. The Cathedral of St Lawrence, built over 400 years, is the domain’s major attraction.
Old city – Dubrovnik, Croatia

Perched on the southernmost part of Croatia on steep rocks along the Adriatic Sea, Dubrovnik rose to fame in the 13th century as an important sea power that traded with India and had a consul based in Goa. Surrounded by walls almost 2000m in length, the township – now called ‘old town’ – remains virtually unchanged and well-preserved despite an earthquake in 1667 and war with Serbia in the nineties. A walk on the fortified walls is a must for visitors, alongside a visit to the Rector’s Palace, Cathedral and Franciscan Monastery with Europe’s oldest pharmacy.

Nestled on the edge of the vast Neretva River, Mostar is the largest settlement in present-day Herzegovina. It gained importance during the 400 years of Ottoman rule in the 15th century when many significant structures were built, including the famous bridge across the river. It was completely destroyed during the Bosnian War, but rebuilt in 2005 with the same design to continue the legacy of the Ottoman builders.
Natural and cultural heritage – Ohrid, North Macedonia

Ohrid, a quiet settlement founded in the 7th century, boasts of an impressive centuries-old quarter with a labyrinth of steep streets lined with beautiful churches, mosques, open-air ruins, castles, fountains and red-roofed buildings, all majestically set on the shores of Lake Ohrid, one of the planet’s oldest and deepest lakes. Must-see sites include the 11th century Church of St Sofia with its Byzantine period fresco paintings and a nearby monastery dedicated to Slavic missionary St Naum.
Natural and culturo-historical region – Kotor, Montenegro

You first view Kotor on the Adriatic coast as you’re winding down the scenic mountainous region of Montenegro. The most famous part of this medieval city is its very well-preserved old quarter, with a Romanesque cathedral and several churches, fortifications, entry gates, noble houses and monuments flanking a maze of cobblestoned streets and squares.
Travel Notes
Getting There: Emirate Airlines (www.emirates.com) have regular flights from Australia via Dubai to Zagreb.
Tour Details: Contact Beyond Travel (www. beyondtravel.com.au) for dates and pricing of the Grand Balkan Tour which includes accommodation, breakfast and dinner and almost all key sightseeing with no extra hidden costs.
- Advertisement -
Share
WhatsApp
Facebook
Twitter
Linkedin
Previous article'Proud moment for India': President, PM laud Chandrayaan 2 success
Next articleIndia, China to pip US in tech innovations: Survey