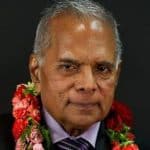 Harish Sharma, the first Indian to hold top office in Fiji as deputy Prime Minister in the Bavadra government in 1987 – the year that reshaped Fiji’s destiny, celebrated his 80th birthday in Sydney recently with the hope that Fiji will recover from its deep political and social fractures, both direct results of the military coup that ousted his government from office.

Calling Australia his adopted country, Mr Sharma feels liberated living in a country that offers him his basic human rights as well as recognizes his Indian identity. He was also President of Fiji’s largest Hindu organisation, the Shree Sanatan Dharam Pratinidhi Sabha.

Advocating politics of inclusiveness, Mr Sharma said Fiji has turned back a full circle into the doldrums while playing the race card. “Indians who have been feared and accused of taking over the education and economy of the country have been forced to look outside the box,” stated Sharma. “In doing so, they have been exposed to global markets in countries like Australia, New Zealand, the US and Canada, and they utilized their education and skills to migrate and establish a better life. The coup was a turning point in this community’s livelihood. They have soldiered on while our indigenous Fijian communities have been left behind, fooled into believing that claiming ownership over land and letting it lie barren would get them something in return”.

“This ideology has been an end in itself,” he continued. “One has to make use of every resource available to survive and indeed flourish in this day of competition and open markets. Any ordinary citizen can zoom into the crisis crippling Fiji to understand that those who played the race card have long deserted the country”.

So what would he do if he were given another chance?

“While Fiji’s constitution is being redrafted, I would ensure that the country has a representative government, voted on Common roll,” said Mr Sharma emphatically. “This would be a good political philosophy which would bring about political and social integration. Fiji needs fair representation of all its citizens through one man: one vote and one value”.

“I am optimistic and know how resilient the ordinary people of Fiji are,” added Mr Sharma.

Speaking about the Fiji Indian community in Sydney, Mr Sharma lamented that it has not ventured outside its own boundaries to assimilate into the multicultural environment. “The community is keeping to its old cultural and class system of networks within its comfort zone. This is not a healthy way to live, given that we are now in a multicultural space. The concept of operating Ramayan madalis is keeping the community locked in. Our great grandfathers introduced the concept of Ramayan recital to keep the religion and culture alive. We now have the capacity to read and study the teachings espoused in these holy books, but why are we using such excuses not to go out and see the world outside of the Fiji Indian community?”

He said there was a constant struggle in the community to keep abreast of one another. “As an uprooted group, we are always going to live in flux,” he observed. “Competition is good, but only to a point. We live in a cut-throat world of ‘I must be better than the others in my social group’. The competition goes beyond self to include children and our aspirations to educate them for careers they may not even be happy to take up. The extended family unit is fast fading away as we feel the pressures of time and space. Elderly parents and grandparents are lost in this tide of change as they have not been able to adapt their thinking to the new trends of nuclear families. Many migrate through chain migration, only to become a part of another vicious cycle”.

“By socialising within their own Indian networks, the community is unconsciously reinforcing bad habits. I do not believe in isolation – we should not be creating a country within a country. Our isolation in the past (in Fiji) was created by the colonial government. Now we are better educated and exposed to opportunities to learn and grow from the experiences of other communities. We should take on this new challenge and liberate our thinking and behaviour,” added Mr Sharma vehemently.

Mr Sharma occasionally discourses on the basics of living a well balanced and happy life based on the teachings of the Holy Ramayan, at the Lyn Parade temple in Liverpool. Here he stresses that we must read the holy books as sources of knowledge, rather than organise recitals where the real meaning is lost in excessive socialising (yagona drinking among men) and fashion parades by women decked in finery as if they are at a Bollywood fashion show.

Harish Sharma was born in Nausori, Fiji in 1932. He worked as an insurance agent and a civil servant before taking up studies at the University of Tasmania in 1960, graduating with a Bachelor of Law (LL.B) in 1964. Upon returning to Fiji he worked for the country’s two senior most Indian politicians: Sidiq Koya and AD Patel, both of whom had led the Indian-dominated National Federation Party as tough opposition to the Alliance Party which ruled from 1966 to 1987, led by Fijian chief Ratu Sir Kamisese Mara, the founding father of modern Fiji.

The party was finally toppled by a multi-racial coalition led by Dr Timoci Bavadra, an ethic Fijian who drew majority support from the Indian communities.  However, the Bavadra government in which Sharma was deputy Prime Minister was deposed in a military coup 33 days later, on May 14, 1987. In that year Mara returned to power, the Alliance Party was dissolved and the role of chiefs in Fiji’s politics took a new turning point.

Mr Sharma set up his own law firm in 1969 and continued his involvement in politics, contesting seven elections without losing any. He retired from politics in 1998 and became a life member of the Fiji Law Society in 2007. In August 2001, Mr Sharma was appointed an Officer of the Order of Fiji.

Mr. Sharma recalled his early years of struggle to get an education and carve a career, claiming he does not have any regrets for the life he had. When a community elder once passed a snide remark to a young Harish in the late ‘60s: “Paidal chale ho, vakeel sahib, motor nahin hai”, he famously replied, “Ji nahin, Punditji, hamaar paas motor nahin hai”.

Now, Sharma refers to his wife as his “rock of Gibraltar”, claiming he owes his success to her, who stood by through all their challenges of poverty, dealing with grief, the political crises when he was locked away for six days during the military coup, and relocating to Australia.

The couple has three children and several grandchildren.

Talking about the Mahatma