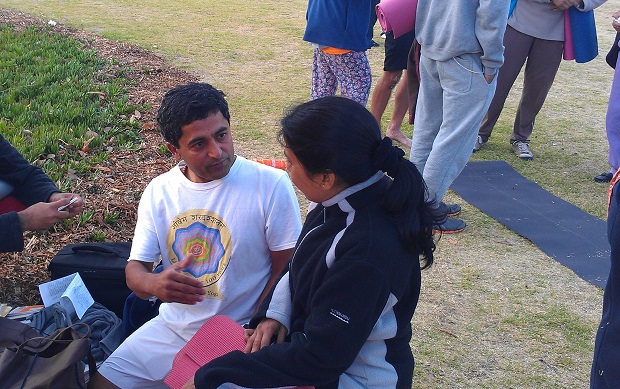 Reading Time: 3 minutesIt’s physical as well as spiritual nourishment in the practice of the Surya Namaska, reports PINKY BHATIA

One of my favourite things to do is take a break from the confines of a gym from time to time and exercise out in nature.  It’s hard to describe the difference of physical activity done indoors versus in the open. There’s the fresh air, wonderful views and the natural and serene sound tracks of nature – the wind, the birds, the waves… Are you feeling the exhilaration yet?

On a recent weekend, some 150 participants took a break from their Sunday morning routine to come and experience the collective energy of 108 sun salutations at beautiful Elwood beach.

The 3rd surya yajna, a ritual that takes place on the last Sunday of summer every year, was organised by Vasudev Kriya Yoga.

A cloudy grey sky met the calm and white waters around the cool brown sand, as calming Sanskrit chants reverberated in the air. The soft voice of a young energetic man on the microphone, encouraged a group of enthusiastic participants of all ages to make yogic postures to the ‘Surya Namaskar’, or Sun Salutation moves. It was a perfect opportunity to practice in the gentle warmth of the rising sun. I did quite a few rounds to unwind, relax, and stretch my stiff, sore legs and shoulders. What I particularly love about the Surya Namaskar, is that it is accessible to the beginner and seasoned practitioner alike. It is the meat and potatoes (or for vegetarians, tofu and sprouts) of many asana practices. With the waves gently rolling on to the shore, it was a very meditative and peaceful time.

It is often said that Surya Namaskar contains the entire practice of yoga within it. But what does that mean? If you examine the postures that make up the sun salutations, you get a wide range of movements: forward bend, back bend, being still, lengthening the spine, grounding the feet, strengthening the upper body, stretching the hamstrings, expanding the lungs and more. That is why Surya Namaskar is the ideal way to warm the body at the beginning of a yoga practice. Even if you do not intend to practice yoga, the sun salutation is a great way to start the day, as it also works on the mind. By hearing the breath and holding the gaze (drishti), these movements allow us to centre ourselves and to quiet our wandering mind.

Like many rituals in yoga and in Hinduism, the Sun Salutations are repeated 108 times (the number is sacred and refers to the wholeness of existence).

As we finished the 108th round, there was a sense of achievement and radiance on our faces as the sweat trickled down, balanced by the brightness of the light around us with the sunrise and the sounds of the birds and waves. Participants reached out to one another smiling, some walking onto the beach to relax on the inviting sand, some of us rushing to partake in the food served by students and volunteers, and some reaching out to buy books on the practice of yoga at the stall in the front.

I took the opportunity to catch up with the founder of the Vasudeva Kriya Yoga, Rajendra Yenkannamoole. Although he has Masters’ degrees in Chemical Engineering as well as Business Administration, Rajendra has been teaching yoga in Melbourne since 2004. He began practicing yoga at the tender age of 10.

“I believe that acquired knowledge must be passed on to others for the benefit of the society,” says Rajendra like a true yogi.

Rajendra reveals that he was happy with the turnout of more than 150 participants at this year’s mass Surya Namaskar event.

“This exercise has many health benefits,” he notes. “Its regular practice helps with increased energy levels, increased radiance, strengthening of the immune system, improved digestion, eyesight and life span and improvement in overall health. Above all we are invoking the grace of the Lord in the sun to illuminate our path. As we nourish our outer personality, we must also nourish our inner personality”.