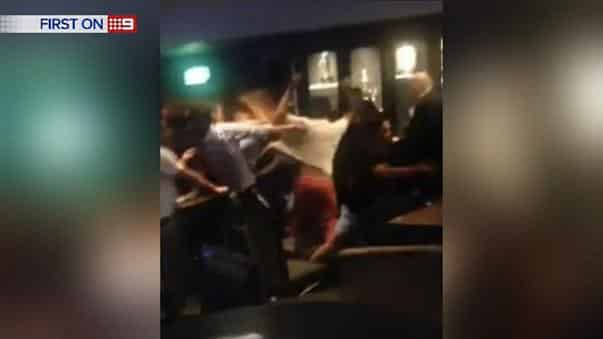 It’s always a clash between fierce rivals on the pitch, but things turned violent for four fans in Sydney after they were injured in a brawl which broke out during the telecast of the World Cup match between India and Pakistan

UPDATE: Two men have been arrested in relation to the incident
Around 40 people were involved in the fight which broke out at the Merrylands RSL on Military Road at around 9.30pm last night.
The incident was captured on a mobile phone camera and posted online. It shows patrons throwing chairs as security at the venue attempted to break up the fight.
.

Police and emergency personnel arrived at the scene and took four injured fans to hospital.
Three people were taken to Westmead Hospital and one to Auburn Hospital with non-life-threatening injuries.
Detectives are reviewing CCTV footage to determine if any arrests will be made.
All of those involved were required to sign in before entering the venue.
A NSW police spokesperson said the licensed venue had followed all procedures and hired their own security guards. He did not believe any children had been present during the violence.
“There were up to 40 involved in the incident and we’re still looking into their ages and their conduct. We have not laid any charges at this stage,” the spokesman said.
Inspector Tamara Kirby of Holroyd Local Area command told the Daily Telegraph, “I think it’s disappointing people can’t go out and enjoy a quiet night at a registered hotel without this level of violence.”
Merrylands RSL club released a statement saying they are working with police to identify those who allowed the sporting rivalry to escalate into violence.
“I am extremely disappointed with the events that unfolded last night and this behaviour will not be tolerated at the Club. All those involved will be banned for life from the club however a sincere written letter of apology to the RSL Sub- Branch will be accepted. This place was where the diggers came to toast the peace and these young blokes have let everyone down” said Bryn Miller, CEO, Merrylands RSL Club.
“We are known in the community as a family club and we are pleased with the speed in which peace has been restored,” he added.
This was the first India-Pakistan match since March 2014. More than a billion people around the world were expected to tune in to watch the game unfold. The match, held at the Adelaide Oval, sold out in 20 minutes.
This was the sixth time India has met Pakistan in a World Cup match since the two teams first played each other in the 1992 Cup which, incidentally, was also held in Australia and New Zealand. This time they beat their neighbours by 76 runs to take the scoreline to 6-0.
- Advertisement -
Share
WhatsApp
Facebook
Twitter
Linkedin
Previous articleIndia thumps Pakistan in Adelaide
Next articleThe Top Ten jobs you thought were a joke