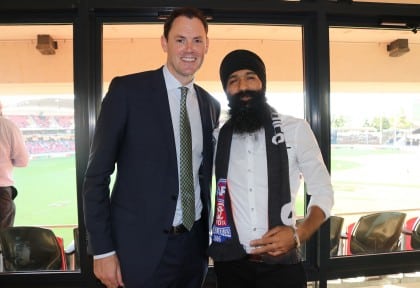 I have to say it. I told you so. The AFL has roared back into life and it’s already been a crazy few games full of drama, passion, pure excitement and even a bit of heartbreak. In fact, it sounds a little bit like the plot of a new Bollywood film. Read on for Indian Link’s first ever AFL Round Round-Up and our very own tipping competition!

The all-exciting opening round was probably the best orientation a new fan to the AFL could ever hope to receive. Big marks, big goals, big hits… and some big upsets. In what looked to be a fairly easy round to predict results, the AFL did what it does best; remind you of how unpredictable the game can be.
One of the major shocks was the fall of the mighty Hawthorn Hawks to an agile Essendon. Of course, here is where the tale of heartbreak and woe begins for Sydneysiders. Whilst the Swans were heavy favourites against Port Adelaide Power, a rusty performance, and some key players missing due to injury, saw the Power make the most of their opportunity and send shockwaves through the Sydney camp with an impressive win.

Looking to the West, after a promising first half, the Giants ultimately fell to the Adelaide Crows with much to work on. However, oh ye of little faith, it is but Round One. The rust is being shaken off and the journey is only beginning.

Perhaps one of the more special aspects of Round 2, more than the matches themselves, was baring witness to the AFL’s commitment to diversity and multiculturalism as a guest at the Diversity Launch at Spotless Stadium. Now, sometimes we can be a little cynical about the value of symbolic functions and speeches, and truth be told, some free food and a ticket to what promised to be an excellent match was enough to tempt one as fickle as me.
However, just as I was mistaken that Australia would not win a test match in India, I was proven wrong once again. The Launch was an incredibly special celebration of the myriad cultures that participate in the AFL, and a reminder of the way in which the sport has, since its inception, brought so many communities together. Indeed, it was inspiring to hear AFL NSW/ACT CEO, Sam Graham, advocate for the importance of multiculturalism for both the sport and the state as a whole.

In light of recent political debates regarding amendments to 18C, a message of re-affirming the importance of diversity in Australia’s most loved game was something quite remarkable. Adding to the mood was the Giants record 102 point win over the Suns, but, in fairness, the Launch gave us something more meaningful and special than a simple win.
And whilst the Swans fell short of staging a stunning come-from behind victory against the Bulldogs, we mustn’t forget that the last time the Swans started with two losses, they ultimately qualified for the Grand Final in 2014! Don’t worry. Have faith. There’s a long season ahead!

* The mysterious brother of mine you’ve heard so much about in these articles. He’s the one to beat!