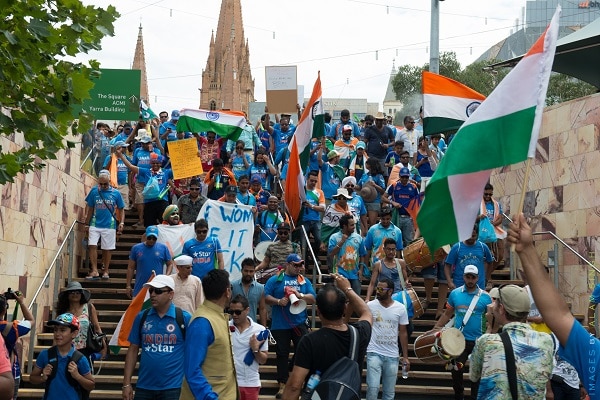 Reading Time: 3 minutesIt’s an infectious mood for fans as India plays in Melbourne

The barometer for patriotism was at its zenith with chants of Jeetega bhai jeetega India Jeetega, Chak De India, South Africa ke chakke chuda de India wale, and Bharat maata ki jai!
The drums were beating, the dhol playing and whistles and trumpets blowing with the sound building to a deafening crescendo. It was a repeat of the jubilant atmosphere witnessed the previous weekend at the Adelaide Oval when thousands of highly pumped up cricket fans from all over the world gathered to witness the World Cup qualifying match between arch rivals India and Pakistan.
“After doing five selfies with people this morning before 8am on my morning walk, I’ve come to the conclusion that the autograph is dead!” Shane Warne told the media.
Autographs may be passé but the selfie gatherers were out in their thousands at the cricket match as social media was inundated with photos of people beaming at the cameras sporting variations of blue and the Indian tricolour.
According to official attendance records, 86,876 people were at the MCG to watch India beat South Africa, causing the Melbourne stadium to erupt in jubilation. The euphoria of the fans was a sight to behold.
It was a shutterbug’s delight to capture the miniature world Cup trophies, tricolour cockatoo crests, wigs, creative slogans, and many innovative outfits that were worn with great pride.
The conga line of dancing blue t-shirts started a couple of hours prior as hundreds gathered in Melbourne’s Federation Square to march towards the MCG waving the Indian flag, leaving no one in doubt about their support for Dhoni’s XI.
“The India versus South Africa match was probably one of the largest gatherings of people from Indian background at one point in Melbourne,” said Gary Vohra, who organised a special march of Indian supporters from Federation Square to the MCG prior to the match. The march was initiated as a public event where everyone had the opportunity to assemble and show their support to the Indian team.

According to Vohra, Federation Square was chosen as the central meeting point as it is an iconic venue, easily recognisable by visitors or locals, and is within close proximity of the MCG.
“Much before the event we liaised with the Melbourne City Council and Federation Square authorities to acquire permissions to hold the march. We contacted the Victorian Police to assist with traffic management and security. Local media like Channels 9 and 7 were requested to offer coverage to the event,” Vohra said.
The mercury was rising and so was the enthusiasm amongst the Indian cricket tragics. “Nearly 800 people confirmed their attendance on social media and over 500 turned up to march with us, despite the heat. The Swami Army decided to join us with their large contingent of people from overseas and interstate. Many locals joined us on the way – including supporters of the South African team.”
Spontaneous chanting broke out as the group marched and danced in unison, towards the ‘G’. The UAV aerial photography drone captured every move as it hovered above the crowd.
Vohra also travelled to Adelaide to attend the India v Pakistan match. “In Adelaide there seemed to be more interaction between the Indian and Pakistani supporters as they spoke a similar language. The friendly rivalry was voiced and understood by both sides,” he said. “This was not so much the case with the South African supporters who were outnumbered by the Indian fans at the MCG.”
An Australian security guard outside the Adelaide Oval Gates had been most perplexed. ‘I have observed all day that the Indians and Pakistanis look the same, speak the same language then why can’t they stand each other?’ he asked. The reply was evident in the placards that were doing the rounds in the oval, ‘Politicians divide us, cricket unites us,’ screamed the slogans. The amicability further reinforced as several Pakistani supporters joined Indian fans to party till late in the night after the match in Adelaide.
Superlatives are rolling in for the atmosphere and the Indian teams performance at both the matches. Contrary to the initial lukewarm expectations from MS Dhoni’s relatively inexperienced squad, the two wins have strengthened the team’s self belief and heightened the fans expectations. With anticipation that is fully palpable the mood continues to be infectious.