The Best of BBL07 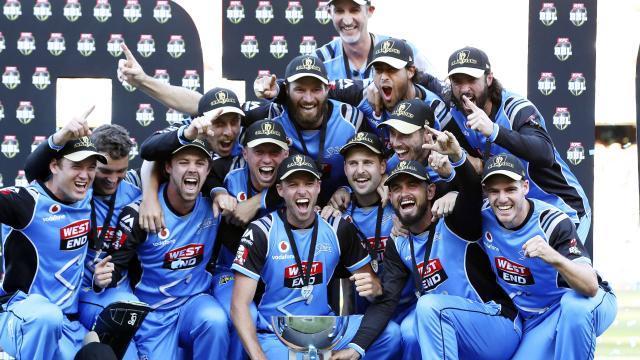 This year’s BBL schedule saw 43 T20s played in just 48 days.
With so much cricket being played, each match tends to fade into the next, and it is easy to forget the most captivating moments of the BBL season.
Chances are, your favourite moment became outdated within the same match. As journalist and author Malcolm Knox noted with no ascertainable hint of pleasure, “In one hour, I saw four of the best catches I have ever seen.”
With the tournament now wrapped up, and the spoils of victory settled in favour of the Adelaide Strikers, here are our picks of some of the more special performances from BBL07.
The boy wizard’s debut spell
At just 19, Rashid Khan may have been one of the youngest players in the BBL, but he was also its most valuable, picking up 18 wickets at 13.83 and a miserly economy rate of 5.65 an over.
Khan’s overall performance may have him at the top of the table in terms of both the first and the last of those statistics, but it is his first match which perhaps most revealed his pedigree.
On debut in front of a packed house at the Adelaide Oval, Khan’s first three deliveries went for 9 runs. In fact, Khan’s figures were an underwhelming 0-16 after two overs – hardly the kind of debut the aspirational teen would have been dreaming about in the lead-up to the tournament.

But Khan’s next over broke the game open for the Strikers in a modest chase, with two wickets including a stunning wrong’un to Sydney Thunder veteran Ben Rohrer. Khan finished with figures of 2-22, along with man of the match honours on his much-awaited BBL debut.
Not Short of runs
A baseballer until the age of 13, you could be forgiven for thinking Hobart Hurricanes opener D’Arcy Short never stopped running through the bases.
A powerful left-hander with particularly fearsome bat speed across the line, Short is a journeyman in every sense of the word – born in Katherine with indigenous heritage, Short grew up in Darwin, before moving to Perth, where he was told by WA coach Justin Langer that he needed to lose weight to make it at the highest level.
After spending some time in the wilderness, Short roared into the national spotlight this season – with international selection and now a $775,600 IPL contract to boot – after piling on consecutive scores of 97, 96, 42 and a BBL record of 122 not out.
In doing so, Short also broke the record of most runs in a BBL season, piling on 572 runs at an average of 57 and a strike rate of 148. The previous record: Shaun Marsh, with 412 runs in 9 games at a strike rate of 128.
Did we mention Short bowls quality left-arm wrist spin as well?
The smallest of margins
Having never before reached a BBL final, the Adelaide Strikers were once again on the verge of being bundled out before the last hurdle in their semi-final against the Melbourne Renegades.
The Strikers put 178 runs on the board thanks to an unbeaten 85 from 57 by skipper Travis Head, on late release from his international duties.
But in the second innings, with two overs to go and 20 runs required, the Renegades seemed destined for victory, particularly with big-hitting batsmen Tom Cooper and Kieron Pollard at the crease.
In the last over, Pollard crashed the first ball for a boundary, leaving Strikers’ Ben Laughlin with 9 to defend from 5 balls, and then 3 from 1; but Pollard failed to put a hittable last ball into orbit, sending the Strikers to their first BBL final by a margin of just 1 run.
The best outfield catch(es) you’ll ever see
When Dwayne Bravo blasted a lofted off-drive off Rashid Khan at Etihad Stadium, it seemed for all money to be destined for 6 runs.
Then, many things happened in a very short period of time.
First, Ben Laughlin ran and dived backwards at the cover boundary to miraculously hold onto the ball, but his momentum was carrying him – at pace – over the rope and into the advertising hoardings.

Laughlin then flung the ball with a backwards flick some 30 metres to his right, where teammate Jake Weatherald ran and dived forward to complete a stunning dismissal.
On commentary, Damien Fleming anointed it the “greatest outfield catch ever taken”, but we haven’t yet decided whether it was two catches or one.
- Advertisement -
Share
WhatsApp
Facebook
Twitter
Linkedin
Previous articleHoly sh*t, my HSC Drama project made it to OnSTAGE
Next articleDon't miss! Five books to look forward to in February 2018