India secures an 18-run victory over Bangladesh in Perth 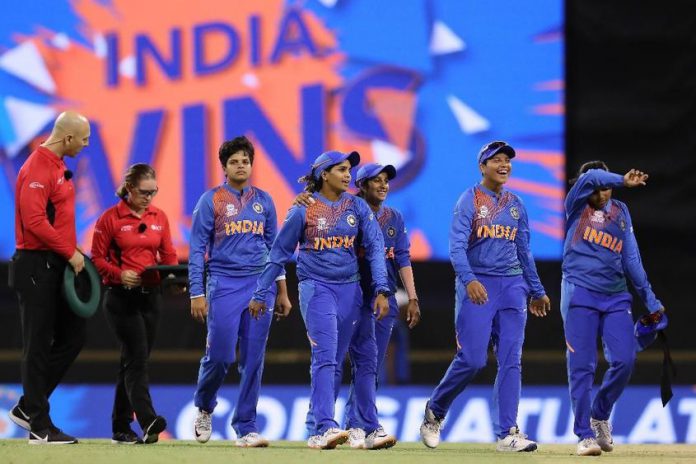 The batting spotlight from Team India was once again on Verma as the 16-year-old smashed a 17-ball 39, including four sixes, in the Powerplay to steer India to 142 to six  – the highest total of the ICC Women’s T20 World Cup 2020 so far.

Shafali Verma’s early sixes and Poonam Yadav’s latest starring role helped the cause. Verma smashed a 17-ball 39, including four sixes, in the Powerplay to steer India to the highest total of the competition so far with 142 for six.

And while Verma was the star of the show, 19-year-old Jemimah Rodrigues also impressed with a measured 34 from 37 – with Pandey confident the world will be seeing more of the same from the exciting young pair in Australia.

“We haven’t asked her [Verma] to change anything,” said Pandey. “She’s been given free licence to play her fearless brand of cricket.

“She’s amazing. At 16 I hadn’t even started training to become a cricketer. I’m very pleased to have such young fearless players in our team. It’s amazing to see them doing what they did for us.

“There’s no baggage, that’s the biggest thing, and they express themselves so well in the team.

“We thought we had a great score on the board to defend today because we believe in our bowling department. We knew it would be a tough target for them to reach.”

Two wickets apiece for Salma Khatun and Panna Ghosh were not enough to halt momentum, nor 35 runs from top-scorer Nigar Sultana Joty as Bangladesh fell short of an upset at the WACA.

Yadav, the hero in Team India’s opening-night victory with four wickets against Australia, once again impressed to take her total to the tournament to seven after just two matches.

Team India lost Tanya Bhatia early but 16-year-old Verma once again showed her star potential by hitting two fours and four sixes in her first 15 balls to steer her country to the highest Powerplay score of the tournament so far at 54 for two.

Verma’s stint was however short-lived, Shamima Sultana juggling a catch off captain Khatun to halt the teenager’s impressive knock at 39.

Bangladesh’s third wicket was a big one as captain Harmanpreet Kaur was dismissed for eight, Rumana Ahmed with the catch at backward point for Panna’s second scalp.

Jemimah Rodrigues posted a steadying 34 off 37 before being run out by Nahida Akter as Bangladesh slowed the rate.

Deepti Sharma and Richa Ghosh put on 19 for the fifth wicket before the latter was caught at the boundary by Nahida for 14 as captain Salma doubled her tally.

Sharma was the next to depart, run-out after a mix-up in the middle with Veda Krishnamurthy (20), who swept four boundaries in her late cameo to take India to an impressive 142 in the absence of Smriti Mandhana.

In contrast, Bangladesh’s start was slow and Shamima was the first to perish when caught at extra cover off Shikha Pandey.

Murshida Khatun’s 30 off 26 got the wheels in motion but the opener was dismissed in the seventh by Arundathi Reddy, Richa Ghosh with the catch at extra cover.

Sanjida Islam (10) and Nigar Sultana (35) put on a 17-run third-wicket stand until the former was caught behind by Bhatia off Yadav before Reddy got her second wicket as Fargana Hoque fell for a duck.

Five boundaries from Nigar Sultana upped the total but she lost her partner Fahima Khatun for 17 in the 15th over as opening-night hero Yadav took her second scalp.

The wickets kept on falling at the WACA, Nigar Sultana was the next victim as Reddy caught her off Rajeshwari Gayakwad before Jahanara Alam was dismissed for ten.

Shikha Pandey took her second wicket by bowling Ahmed in the final over, but Yadav finished the evening with the best bowling figures of three for 18 as India made it two from two in Group A.

For India, victory was their second of the tournament, while Bangladesh fell 18 runs short of an upset in their first match Down Under.

Nigar Sultana Joty top-scored with the bat with 35 off 26 balls but struggled to build a partnership in the middle as Bangladesh were halted at 124 for eight in their chase.

And while Joty was full of admiration of Verma, she pointed out the 30-run contribution of Bangladesh’s own young star Murshida Khatun at the top of the order.

“I think she is going to be one of the best players in our team. It is her first World Cup but she’s been with us for the last 18 months so she’s gelled well.

“We missed some chances in the field and didn’t bowl well enough in the last five overs. We haven’t played many matches against top eight teams, but we’re a cricketing nation.

“People are expecting us to win and we’re always going for the win too.”