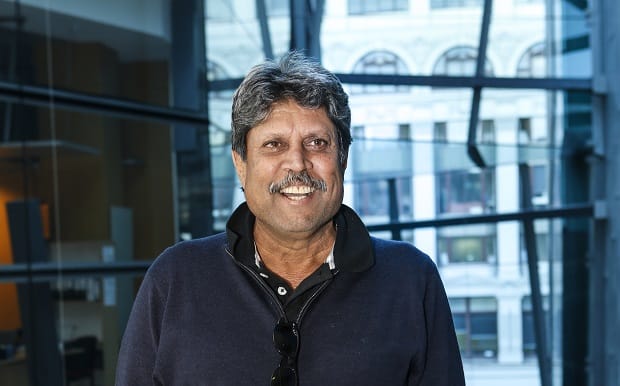 Reading Time: 5 minutesPRETTI JABBAL chats with Kapil Dev about current cricketing talents and trends, and his love for golf

A ceremony to launch the 11th Cricket World Cup was held in Melbourne recently, with international cricket legend Kapil Dev attending as a special guest of the ICC and Cricket Australia. The Cricket World Cup will be jointly hosted by Australia and New Zealand from February 14 to March 29, 2015.  The Prime Ministers of Australia and New Zealand, ICC President Alan Isaac and former cricketers were present during the launch.
14 teams will be seen in action across 14 venues, and Melbourne will host the finals.
A living legend he may be, but that does not stop Kapil Dev from being one of the most amicable and interesting people to whom I have spoken. Add to this personable mix a good sense of humour, and talking to Kapil Dev is a real delight! When the phone call came to catch up with him over breakfast, I did not hesitate to drag myself off my sick bed and headed towards the Grand Hyatt where Kapil was staying during his visit to Melbourne. He was due to fly back to India that afternoon to continue with his numerous commitments and pursue his all-consuming passion for golf. A warm welcome later, we found ourselves ensconced with him in a trendy café on Federation Square tucking into a hearty soup and conversation.

Preeti Jabbal: What was the buzz at the World Cup 2015 launch that you recently attended?
Kapil Dev: The main buzz around the launch was because people were happy that the finals were to take place in Melbourne. It’s wonderful to see that the preparations have started almost 15 months in advance. In our part of the world this does not happen as we tend to leave things to the last minute. A good organisation starts planning much in advance, on top of that if the Prime Minister and the government of a country gets involved, then you do not come across many hurdles.

PJ: Hopefully! What will be your role at the World Cup 2015? Will you be involved, and in which capacity?
KD: It’s a bit too early to predict that, as I said to you before, we don’t plan this early (laughing), but I think I will be on television, most probably commenting on the World Cup either from here or from the studio in India, I am not sure yet.

PJ: India did not perform well at the World Cup in Australia in 1992; what are their chances of winning this time, under similar conditions?
KD: I think the current Indian team is looking much better with newcomers and youngsters in the team who are shaping up quite well. It is a different team without established players like Sachin Tendulkar, Yuvraj, Sehwag or Harbhajan, as none of them have played in the past six months. If the team has won the Champion’s trophy despite not having all these good players, then it is safe to say they are ready. My concern is mainly about injuries not performance.

PJ: Amongst the newcomers in the current Indian team, do you see someone as a potential Tendulkar or Sehwag?
KD: I would never like to compare anyone with such great cricketers who have done service to the country; however Shikhar Dhawan has shown tremendous potential and talent, Ravindra Jadeja is another good one while Mahendra Singh Dhoni is the backbone of the team. Even Ravichandran Ashwin has now gained more experience and is bowling better than he did when he played last time in Australia. I feel that the Indian team is well balanced, at this stage; I just hope they should not have any major injuries.

PJ: What is your opinion of DRS (Decision Review System)? Should it be mandatory to use in the World Cup, or restricted to just the umpires, or open to players?
KD: That is entirely up to ICC (International Cricket Council), if they feel that every player should feel comfortable with the decision, then why not? The technology is not always reliable and accurate, but if people are happy with the majority of the decisions, I do not see any problem with DRS. The Cricketing Committee is smart enough to decide whether DRS should be available to umpires or players or both, and whatever applies to the World Cup should be used throughout the year to ensure consistency. This system should not be limited to World Cups only; every tournament or Test series or One Day International and every cricket board who can afford it, should try to apply DRS. Consistency will ensure improvement.

PJ: You have been quoted saying that you have a strong belief that India will win the World Cup 2015? What prompted this comment?
KD: If the World Cup was to take place today I could confidently say that India would have a 70% chance of winning, but 15 months is a long time and things could change. Lots of new players can come up in that time and circumstances can change.

PJ: What has led to such confidence in the Indian team?
KD: The young boys who have come into the Indian team have lifted the game. I think once you start winning and believing in yourself, it builds your confidence. Jadeja, Virat Kohli, Dhoni are all are outstanding players. The only weak link in the Indian team is their bowling. If they can maintain good bowling standards and play well as a team, they have more chances to win than any other team.

PJ: What about the Australian team? What do you think of their new talents like Ashton Agar?
KD: I have never seen such an outstanding performance as Agar’s first test! For someone to play that well on his debut is exceptional, and it was unfortunate that he could not make a century. I have no doubt that these young boys will come out and make their mark, as there is a lot of talent in the Australian team; but the question is whether they can use it at the right time. At this stage they do not look like a strong team as they are lacking in certain areas. I think they need guidance and leadership to prepare them for that win.

PJ: The Australian team has not been at its best form recently. What do you think will help them improve their performance?
KD: Self-belief! You need a captain who takes ownership and starts playing from the front. The Australian captain is the most exciting cricketer in the world, however he seems to be going through a bad phase with health issues. If the captain is replaced, the team gets rattled. I hope the Australian captain overcomes his back problems and is able to develop the team well in advance. This is their territory and they know the conditions better than anyone else.

PJ: What is your opinion on the recent allegations that have affected the IPL (Indian Premier League)?
KD: The IPL has given a lot of fun, happiness and entertainment to the cricketing world, however the game has been marred with the greed of certain individuals. It is wrong and there is no need now or ever to do anything like that, and everyone cannot be tarred with the same brush. The ownership now lies on the teams, senior players and authorities to keep a strict eye on the players to ensure that no-one spoils the name of the game.

PJ: Speaking of games, how is your golf going?
KD: (Brightening up) Not too bad, I just don’t get enough time to play. I enjoy the game and I play every weekend, and that is why I am flying back so I do not miss my weekend game.

PJ: You could play here… Melbourne has some of the best golf courses in the world.
KD: It is winter here and not many people play golf in this weather. I have some other commitments as well and need to return; however I would love to be able to play here someday. Maybe next time!