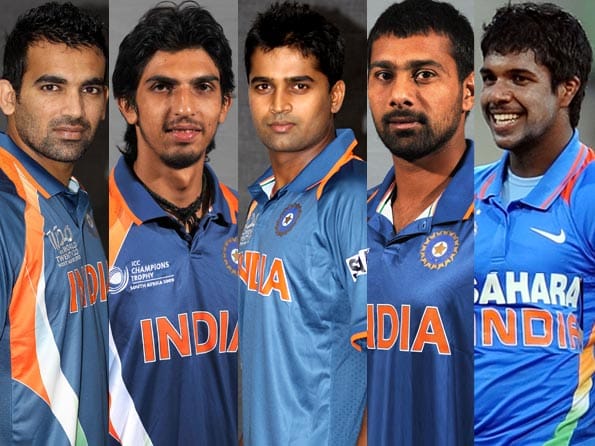 Reading Time: 3 minutesThe success story of the Indian pacers in the ongoing World Cup has not only warmed the hearts of fans but also raised the hopes of the country retaining the coveted trophy on cricket’s biggest stage. History shows that the pacers have led the charge on both occasions that India won the Cup.

If Mohammad Shami has spearheaded the Indian attack with 17 wickets this time around, Zaheer Khan claimed four more in India’s triumphant 2011 World Cup campaign at home to finish joint top wicket-taker alongside Pakistan’s Shahid Afridi.
Back in 1983, when then rank outsiders India stunned the cricketing world by becoming champions, seamer Roger Binny had used the favourable English conditions splendidly to finish with the most number of wickets (18) in the competition. Another medium pacer Madan Lal had closely followed Binny with 17 scalps.
Though Shami still has to take a giant leap forward to replicate what the other two greats did, it is safe to say he is on the right track, and needs to keep up the momentum against Australia in the semi-final.
While the Bengal Ranji Trophy seamer has picked up wickets at an average of 13.26 from the six matches in which he has featured, his teammate Umesh Yadav has provided able support with by grabbing 14 wickets.
On June 25, 1983, when India skipper Kapil Dev held aloft the World Cup in the Lords cricket ground balcony Binny had overshadowed his feared counterparts from the West Indies and Australia to finish with a bowling average of 18.66 per wicket.
The right-arm bowler from Karnataka would bowled a probing line and length and keep the batsman guessing with his variety of deliveries.
Joining Binny was Madan Lal. Known for his famous comments during the final against the West Indies: “Captain, tu mere ko ball dede, aur ek over (Captain, give me the ball for another over)”, Lal made captain Kapil Dev listen to him and responded by getting rid of the legendary batsman Vivian Richards, with the skipper taking an astonishing catch at the deep.
Lal finished with one scalp less than Binny, but had a better average of 16.76 from eight matches.
The duo was instrumental in the team’s crucial last group game victory over Australia, bagging four wickets each. India carved out a 118-run win and sealed a berth in the semis.
In most of the matches, their bowling at the middle overs was excellent, choking the opponent batsmen and inducing them to make mistakes in desperation.
Twenty eight years later, the same iconic 1983 afternoon scenes unfolded at the Wankhede stadium in a firecracker-lit night in Mumbai, two of India’s heroes were again pacers who jolted the opposition upfront.
Though there was no tearaway fast bowler in the side, Zaheer and Munaf Patel outfoxed the batsmen with their slower deliveries and impeccable disciplined bowling.
Zaheer devised the “knuckle ball” which bamboozled the willowers with its lack of pace. The most famous example of the delivery was when he clean bowled the West Indies middle-order bat Devon Smith in an important Group B encounter in Chennai.
Zaheer, who turned out in nine matches, ended the quadrennial event on a high. Patel took 11 from eight matches.
Part time spinner Yuvraj Singh who was adjudged the Man-of-the-Series clinched 15 wickets from nine matches.
The current edition of the Cup has been a fairy tale for the Indian bowlers, who have skittled out their opponents in each of their seven games. Of the 80 wickets taken by India, the pacers have accounted for 43.
As Mahendra Singh Dhoni’s men set foot on the Sydney Cricket Ground for the semi-finals at 2.00pm today, Shami and the rest of the Indian bowling line-up, will have to be at their very best indeed.