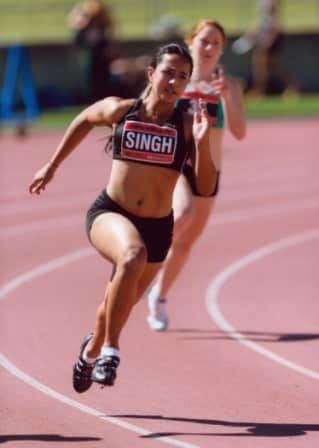 On top of currently studying the HSC this year, 17 year-old Tavleen Singh is also extremely busy winning races. In March this year she flew across to Perth to compete in the Australian Junior Athletics Championships 2013, and came first in the 200 metres. In February she also came first in the 100 metres and 200 metres at the NSW Junior Athletics Championships 2013. Along with this, she came away with a first in the 100 metres and second in the 200 metres at the NSW All Schools Athletics Championships, October, 2012 (under 18s). On top of all of these achievements Tavleen won the 2012 Pierre de Coubertin award, presented by the Australian Olympic Committee, for excellence in school sport.
“She has balanced her academic and sporting endeavours very well, [and] her dogmatic pursuit to be number one in the country has finally paid off.? We are hoping this springboards her into achieving bigger and better in the years to come” Tajvir Singh, Tavleen’s father told Indian Link. Tavleen’s current personal bests are 11.93s for 100 metres, and 24.29s for the 200 metres. These results reflect her current ranks of fifth in the 100 metres, and second for the 200 metres on the Athletics Australia National Ranking Under 20’s for women, 2013.
Tavleen’s sporting heroine is Shelly-Ann Fraser, a Jamaican track and field sprinter, who last year, at the age of 21 become the first Caribbean woman to win the 100 metre gold at the Olympics. Shelly-Ann comes in at only 1.52 metres in height, which is just below Tavleen’s 1.58 metre height. “This inspires me to not be intimidated by taller sprinters. At the recent nationals, I was the shortest in the final?s line up. Shelly was an inspiration, and self belief helped me win the 200 metres. In the process I managed to beat one of the girls who was a semi finalist of the 200 metres at the World Juniors in 2012.? I believe nothing should limit you from having a go at anything in life,” Tavleen told Indian Link. Shelly-Ann has managed to win gold at the Olympics, and Tavleen hopes to one day do this too. “One of the reasons I idolise her is because of her determination and willingness to always do her best”.
Tavleen trains up to six ?days a week, racking up to somewhere between 10-15 hours of training a week. This is a combination of two days spent at the gym, working on strength and conditioning with her trainer Eimear Cradock. The other four days are spent with her second coach, Australian Olympic athlete Penny Gillies, training on the track. Penny Gillies is an elite sports coach, as well as being a dual Olympian, and has been the Australian Team Coach for the World Championships and for the Commonwealth Games (2002 and 2006). “I know as? a coach that she will not take any short cuts and do the training that is required so can achieve her goals,” Penny told Indian Link.
Along with all of this training, Tavleen is currently studying for the HSC at Caroline Chrisholm College, Glenmore Park.
“The World Junior Championships in 2014, being hosted in Oregon, USA, hopefully for the 200m and possibly a relay squad for the 2014 Commonwealth Games in Glasgow,” is what Tavleen is focusing her training on next. This is just a short term goal, and after this she plans on training even harder and pushing herself even further to try out for the Australian Commonweath Games team. And who knows, maybe the Olympics one day?
“A long term goal would obviously be to make it to the Olympic Games in Rio, 2016 and Commonwealth Games in 2018 at the Gold Coast,” Tavleen told Indian Link. Tavleen sure seems to have her life on track.