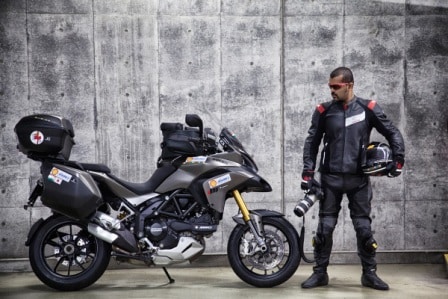 Reading Time: 5 minutesRiding a motorbike across the vast, sparsely populated landmass of Australia can be daunting, but exciting, writes RITAM MITRA

You travel around the globe, visiting places such as Ireland, the European Alps, Dubai, Malaysia and Italy. You spend weeks on end riding some of the most powerful motorbikes on the planet across coastal tracks, winding mountain roads and dead-straight highways, taking photos of breathtaking scenery along the way. You ride not to win a race, but to see these exotic corners of the world, to challenge yourself, to connect with others in a way few could ever imagine. Sounds like a dream? For Sundeep “Sunny” Gajjar, it’s not just a dream, this is how he puts food on the table.
Sunny calls himself the “Motographer,” which is a combination of his two greatest passions, motorcycling and photography. He juggles these talents with his leading motorcycling-for-leisure website as well as a print magazine, which he started just three years ago. In mid-April, Sunny will be kicking off a 23,000km motorbike tour of Australia, six years on from his first-ever overseas tour, which also happened to be in Australia. In between his two visits, Sunny has covered over 15 countries and has worked hard on his photography skills, but this unbelievable story had humble beginnings.

A quiet start
Born and brought up in New Delhi, Sunny began working as a graphic designer in 2000, pursuing a Bachelor?s degree in Computer Sciences at the same time. In 2002, Sunny got his first motorcycle and started up a personal website dedicated to it. As time passed, Sunny soon happened upon superbikes and he started expanding the website rapidly, uploading more pictures and adding a forum, as well as other new features. By 2003, Sunny’s xBhp.com boasted 5000 registered members, it was the biggest Indian motorcycling platform on the internet, in a country where motorcycling is more about the commute to work than the thrill of the ride.
In 2005, Sunny was running low on cash, his graphic design work was being left behind in lieu of the time he was spending on his website. Castrol India offered to help him out, and in 2006 Sunny decided to take a road trip around India on a superbike (a Honda Fireblade 1000RR 2005 model). He called it The Great Indian Road Trip. Its success was unrivalled, but Sunny dared to dream higher, he had a longer road to ride.

The dream begins?
“I was 27 and yet to step out of India,” Sunny says of his decision to take the concept overseas in 2007. “Like a wet puppy scared in the rain I applied for my first visa all by myself, broke a fixed deposit account and flew to Australia. It was a 74-day trip and I was looking for sponsors to provide for motorcycles and money. I had no idea where to start,” he recounts.
With days left until Sunny was to fly back to India, having failed to secure a sponsor, a last-minute phone call from an Australian magazine gave Sunny the good news he was hoping for. After securing a couple of bikes, as well as insurance, from another Australian company, Sunny’s dreams were at last being realised. It was at this moment, Sunny says, that he realised his never-say-die attitude. “I proved to have dogged determination, I could have had a job earning a lot in any big company, but I wanted to do this. A lot of family members were angry with me, even companies were sceptical. All I had was the xBhp.com domain name. Was that enough? Five years down the line it seems that it was,” he recalls.
Since then, Sunny has toured New Zealand (2008), India and Ireland (2009), Italy, Malaysia and again New Zealand (2010), and the European Alps and the USA (2011).
One of last year’s tours, however, was particularly significant. Sunny travelled from Dubai to Italy across 10 countries as one of the guests of honour during World Ducati Week, he was the only journalist in the world chosen for the ride, which covered countries including Turkey, Hungary and Romania.
“I always want to prove [myself] and do things which have not been done by Indian motorcycle journalists before,” says Sunny. “That’s why I had set a minimum standard of photography and blogging on my rides as well. This clicked well with Ducati who recognise passion and talent. I was elated to get this opportunity”.
Having ridden across Japan and the Philippines already since World Ducati Week in 2012, it’s easy to forget that each of Sunny’s tours encompasses motorcycling across the entire country, covering huge amounts of ground in comparatively small amounts of time.

The Grand Australian Road Trip
Sunny’s first trip to Australia was done on two 650CC Hyosung bikes, with a backup van for 22,000 km. This time around Sunny’s 23,000km trip will be a solo effort, covered on one of the most powerful and exotic motorcycles for touring, the Ducati Multistrada 1200, a bike boasting 150HP and 1200CC, although Australia?s speed limits keep Sunny under 130kmph for most of his journey.
Sunny’s Grand Australian Road Trip will start off in Sydney, from where he will travel north to Brisbane, across to Rockhampton and Mount Isa, and then down to Alice Springs. Sunny will venture south to Uluru for a few nights before riding back up to Darwin, then west to Broome. He will then spend roughly a week in Perth before beginning his trek east across the southern part of the country, including a ferry trip to Kangaroo Island from Cape Jervis along the way. His final leg will see him spend a few days in Melbourne, catch a ferry to Tasmania, and then finally return to Sydney via the nation?s capital, Canberra, after 64 days on the road.
But Sunny will be doing his best to cover as much of it as possible.
Sunny also faces the heavy weight of expectation from fans and friends, including those who follow his journey on xBhp.com. “On a personal level, I hope, as always, that I am able to complete this journey around the fantastic country/continent of Australia and live up to the many expectations, also from the companies that have understood me and my passion. The most pressing expectations come from my friends and motorcyclists in India who follow my travels. I feel I have a responsibility of doing each ride successfully and to the best of my ability for them, and for India,” he says passionately.

In the eyes of the Motographer?
Sunny prefers to live in the now rather than thinking too much about his future plans. “A lot of countries are left (to ride in). I plan in parallel and as and when things fall into place, I pick them up,” he confides. It might seem like a rosy lifestyle, but managing a website, a print magazine, photography and organising tours is no mean feat.
“I have an office back in India which takes care of my print magazine and xBhp website. I also have to manage that and usually it happens that people stop doing what they actually love. However, in my case I make a few sacrifices and take up the additional ‘burden’ and do these kind of trips anyways. I have marked a few days in between the trip to do my office work from hotels as well. Getting sponsors and managing these trips is a nightmare of a good kind,” he says.
Even though Sunny has all the style, class, an attractive sense of arrogance and an unquenchable thirst for adventure, he recognises just how lucky he has been. “I consider myself very lucky and fortunate to be in a job that is also my passion. Today I strive to be a better photographer and produce even better quality work, despite the mountain of headaches that come with a magazine and managing a company,” he adds.
So what is the Motographer’s latest journey about? Perhaps he sums it up best saying, “The Grand Australian Road Trip put very simply and honestly, is a ride celebrating the innate desire that we riders have to ride a motorcycle on open highways under a blue sky. About having that freedom to stop when we want, where we want. The feeling of opening the helmet lid to let the cool wind hit your face and the scent of the pines invigorate you”.
To follow Sunny’s trip around Australia, visit www.thegrandaustralianroadtrip.com, where you can view photos of Sunny’s trip, track his progress around Australia and comment on the journey.