More than just a game? 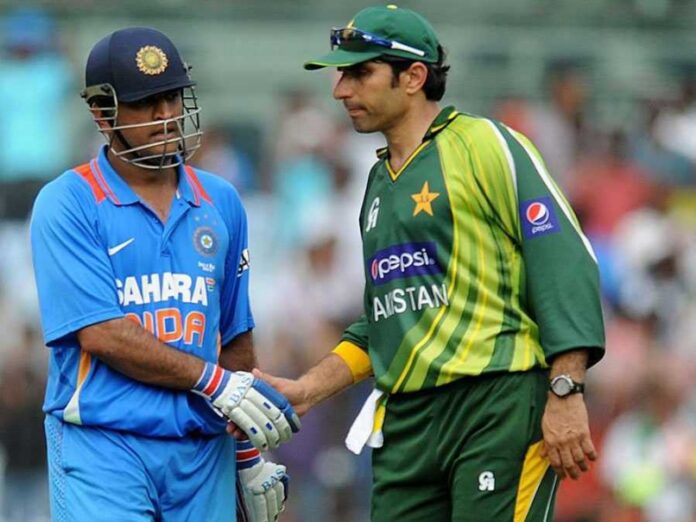 The 15 Feb India-Pakistan clash lived wonderfully up to the expectations of the fans and commentators alike. With thousands of people coming from all over the world, Adelaide witnessed a party it had never seen before.
The India v Pakistan cricket game has traditionally been billed as a war minus the shooting, where defeat is not an option. As the two nations locked in a fierce battle of attrition, life came to a standstill on the Asian sub-continent.
From Chennai to Centurion, Mumbai to Melbourne and Lords to Lahore, every time these two neighbours have squared off against each other, there have been plenty of fireworks both on and off the field. For some reason, winning a cricket match becomes a matter of life and death. A victory sends a nation into frenzy. And a defeat is nothing less than a national calamity!
What makes an India v Pakistan match so special? Why is so much at stake in losing a game of cricket?
To understand this, we need to go back a few decades when the emotionally charged India-Pakistan matches were few and far between.
In the past, both India and Pakistan would play once in six months in Sharjah. Effectively, it meant that the losing team supporters had to wait for six months to see the tide turn and to try and seek revenge.
On their part, the media too played its role, acting as a catalyst stoking the emotions between the supporters of the two sides; after all, it is much easier to sell hatred than to promote peace. It is much like a trick perfected over the years by certain politicians on either side of the border.
A Sachin Tendulkar could hold a nation to ransom through the sheer power of his blade as much as a certain Wasim Akram, or a Javed Miandad, would bring Pakistan to a standstill on the strength of their individual cricketing brilliance.

The hype surrounding the India-Pakistan match was so great that it divided the passionate fans to a state of seemingly hating each other. At the same time, it also instilled fear in the minds of the players themselves. On either side of the border, reaction to a victory or defeat would simply be extreme.
A legend like Wasim Akram had to park his car in his neighbour’s garage lest it caught the attention of the unruly mob whenever his team lost a game. In much the same way, Indian cricketers’ houses would be stoned, or have black paint strewn across them, if they did not measure up to the expectations of their so-called die-hard fans.
In March 1986, when India managed a miraculous victory over Pakistan in Sharjah – bundling them out for a mere 87 after scoring just 125 runs, such was the rage among the Pakistan fans that the team was locked inside the dressing room for more than three hours. Eventually, the team had to be escorted to their hotel under tight security.
Six months down the track, the reactions were exactly the opposite when Javed Miandad hit an extraordinary six off a full toss bowled by Chetan Sharma, to give Pakistan a heart-stopping one-wicket victory. While Miandad kept receiving awards for hitting that six, Chetan Sharma was condemned for life.
It was not just Chetan Sharma, in fact, the entire country bore the brunt of that last-ball six until March 2003.
On that glorious afternoon in Centurion, Sachin Tendulkar slapped an express delivery from Shoaib Akhtar for a memorable six, his bat almost catching fire as he played an upper cut to deposit the ball into the stands behind backward point. That six not only ended a decade of India’s cricketing inferiority over Pakistan, but it also saw the genius of Tendulkar guiding India to victory in the 2003 World Cup quarter-final.
Ironically, while the fans have taken the India v Pakistan matches almost as war, the players on either side have managed to share an excellent rapport.
Lala Amarnath knew exactly where and how to find Mohd. Nissar whenever he toured Pakistan. Lalaji would walk the bylanes near Nissar’s house before shouting his nickname at the top of his voice. And Nissar would know one of his best friends had come calling.

Over the years, Sunil Gavaskar and Imran Khan have had the highest regard for each other, just as Bishen Bedi and Mushtaq Mohammad would speak as long lost friends. Moin Khan regularly invited Sourav Ganguly to his home for dinner, while Kapil Dev and Ravi Shastri have been friends with Wasim Akram for a long, long time. Current Indian skipper Mahendra Singh Dhoni continues the trend with his friendly and down-to-earth approach.
It is indeed a pity that the fans in India and Pakistan haven’t always been able to emulate their cricketers.
Of course, things have changed for the better since 2004 when India toured Pakistan after a gap of 18 years. That series was indeed a remarkable turning point. At every venue where India played, the locals opened their hearts both for the Indian cricketers and for the Indian fans. Such an instant, genuine and overwhelming outpouring of love and affection was a once-in-a lifetime experience for every single Indian who toured Pakistan.
While the Pakistan fans happily acknowledged India’s victory both in the Test and one-day series, the Indian people too reciprocated the gesture soon after. When Pakistan came down to India and defeated India – despite Tendulkar scoring a magnificent hundred – in a nail-biting finish in Chennai, Wasim Akram and his team were given a standing ovation as they did a lap of honour.
Over the past decade or so, the Sharjah effect, thankfully and rightly, is only a distant memory. The two teams still take to the field filled with passion and pride, but no longer with hatred!