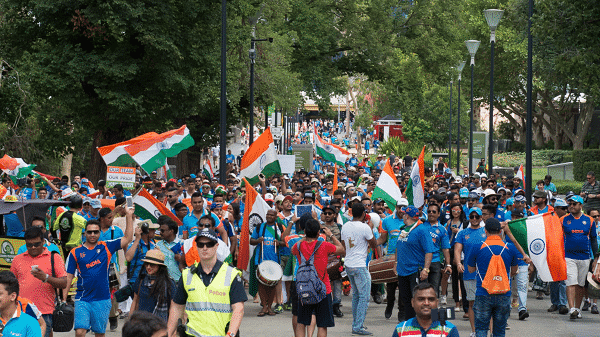 Reading Time: 4 minutesIt’s a boyhood dream come true to see the Men in Blue live at the MCG

The year was 1992. I was in high school at the time. The Cricket World Cup was being played out that year in Australia and New Zealand.
The North Indian winter was on its way out and dad and I would wake up in the early hours of those chilly mornings to watch the cricket games, rugged up in our quilts and sipping on cups of tea.
The “final” that year was played out at the Melbourne Cricket Ground (MCG). It is the first vivid memory of the MCG that I am able to recollect. As I watched Pakistan lift the trophy in that Final, the boy in me dreamed of one day witnessing a World Cup cricketing contest live at the MCG.
People and life around me went back to their usual routines once that tournament ended. However, that longing to watch a Cricket World Cup game at the MCG simmered on within me.
Then, on 22 February, that random dream etched 23 odd years ago into the mind of a school kid, came true.
From the third tier of the MCC Pavilion at the MCG, Dad and I cheered on the Indian cricket team as they demolished the mighty South Africans in their World Cup encounter. Along with 80,000 fellow Indian supporters we cheered and roared. It was a spectacle to behold.
The suburban train ride to get us to the Ground sounded and felt more like a Mumbai local, buzzing with random (and often loud) Hindi conversations all around, only to be interrupted by the English announcements of approaching stations. Once off the train, we followed a throng of chanting Indian supporters to the gates of the MCG.­­
A short stroll from the train station and there we were. Staring at the colosseum of modern day cricket in all its glory, the Melbourne Cricket Ground. Or, as the locals call it – the “G”. A boy’s childhood dream come true. A cricketing fan’s ultimate pilgrimage. A solemn shrine for those smitten with a cricketing romance.
The queues to enter the stadium were phenomenal, as thousands and thousands of Indian cricket supporters (and a couple of dozen South Africans) waited to get into the stands, in the scorching summer heat.
I have now watched a good share of cricketing encounters at the MCG,but this one was bound to be special. It was the World Cup. India was playing. And my dad was with me.
The stands of the “G” were draped in the official ICC colours, but for an entire evening the mighty old ground substituted its usual green and gold Aussie flavour for a lavish expanse of deep blue across its entire width and breadth.
Just before the game, the Indian National Anthem echoed around this arena like an ebullient war cry of passion and patriotism by a fanatical contingent of Indian supporters.

Over the years the MCG has witnessed large, passionate Australian sporting crowds. But a stadium full of Indian cricket fans is raw passion on steroids. Drums, Bollywood tracks, and dancing – the festivities started even before the first ball was bowled. Every single run that India made was cheered, as was every single misfield or overthrow by the South Africans. Boundaries and milestones by Indians, and the South African dismissals later on, were greeted with joyous eruptions.
Then, in a rare moment of silence, the great Sachin Ramesh Tendulkar decided to make his presence known as he stood next to the window of his viewing box. An innocuous deed, he may have thought to himself while doing so. It is rumoured that the gods in the farthest heavens heard the cheer that went off at the “G” that very moment.
It was an all Indian affair all night long. On the field. And in the stands. An Indian fairy tale unfolding in a foreign arena. For once, the Indian team, too, lived up to their demigod status as they belted a strong opposition.
The MCG had been loaned out for an entire evening, it felt, to Indian cricket and its supporters. And the temporary occupants did not disappoint. They upheld the sacred MCG traditions, especially, the ones attributed to the Great Southern Stand (or the old Bay 13 as it was called). There was a Mexican wave on several occasions and the section of the crowd that killed the wave was booed down. Every single time.
The MCG is an iconic cricketing arena and will continue to host great sporting encounters. But it will not be in a hurry to host such an extreme overseas makeover again soon.
As the steamy evening transcended into a warm summer night, the “G” sparkled in the lights towering around it. As if to seduce another school kid thousands of miles away. To give that child a dream to grow up with. A dream that one day, he will come and witness greatness unfold within these premises. Just like I did with my dad.
After all, “Greatness is contagious”.