She won gold in the individual, and the mixed team, 10m Air Pistol categories. 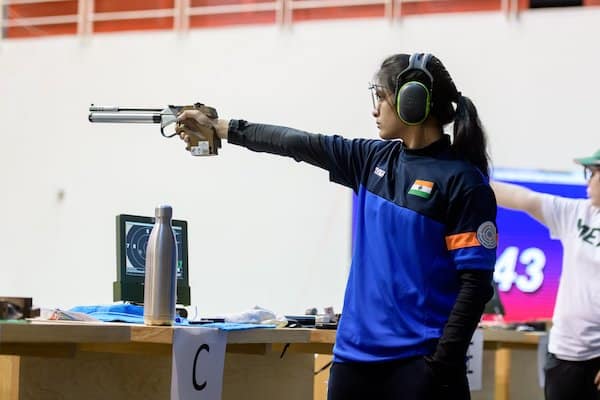 Manu, 16, not only won the 10m Air Pistol gold medal but also partnered Om Prakash Mitharval for the 10m Air Pistol mixed team gold on Monday.
In the individual event, the Indian debutant shot a total of 237.5 to prevail over home favourite Alejandra Zavala Vazquez, who finished second with a total of 237.1.
Frenchwoman Celine Goberville finished third with a score of 217.0.

Manu’s teammate Yashaswini Singh Deswal signed the best World Cup placement of her career, scoring 196.1 points and finishing fourth in her first final appearance.
In the mixed team event, Manu and Mitharval totaled 476.1 in the final. It was India’s third gold medal at this event.
In total, India has seven medals and is now on top of the medal tally in this World Cup.

Germany’s Sandra and Christian Reitz fired 475.2 to take the silver medal, while France’s Celine and Florian Fouquet got 415.1 to finish third.
India also bagged a bronze in the 10m Air Rifle mixed team event, with Mehuli Ghosh and Deepak Kumar finishing with a total of 435.1.

Chinese pair of Xu Hong and Chen Keduo set up a world record score of 502 to clinch the yellow metal.
Romania’s Coman Laura-Georgeta and Moldoveanu Alin George settled for the bronze medal with a total score of 498.4.
India’s Ravi Kumar and Apruvi Chendela got 348.9 to finish fourth.