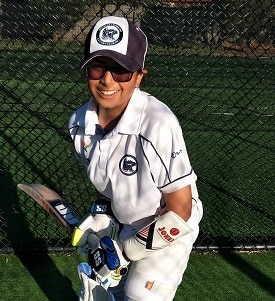 Reading Time: 2 minutesWork hard and play harder is the motto for young Melburnian Amanpreet Kaur as she gears up to compete in the School Sport Australia Championship.
Amanpreet has been selected in Victoria’s Under-12 Cricket Team. The championship will be held in Barooga, NSW from 5 January-12 January 2018.

Scoring 37 runs in Claudia Fatone Under-12 was the best moment of Amanpreet’s cricketing life so far. The talented cricketer wishes to take her game to the next level and score at least a half century very soon.
All-rounder Amanpreet has played club cricket since 9 years of age. Her interest in the game began from watching cricket with her family.
Encouraged by her father Ramandeep Singh, she started participating in the sport through the Milo Programme to begin with, followed by active participation in school sports and cricket clubs.
She has played with mixed teams in the past and is currently playing for an all-girls team. She wants to disprove anyone who doubts her ability to succeed in this game due to her gender.
And she wants her bat to do most of the talking.
“People can put you down sometimes for playing what they think is a boys’ sport but I believe that cricket is a game for everyone, regardless of gender, age and background,” said Amanpreet.
Inspired by cricketing greats like Australian cricketer Molly Strano and Indian star Harmanpreet Kaur, this young lady works very hard to improve her skills.
Her weekly schedule comprises mainly studies and cricket, so there isn’t room for much else. She is either training or playing cricket almost every day of the week.
Her coach Rob Ward was instrumental in guiding her to hone her skills and go through the trials for selection.

“I was thrilled to know that I could participate and contribute to the 12 and under Victorian Cricket state team. I want to work even harder now on my game. I generally focus on practising the game more than the techniques,” said Amanpreet.
Besides participating in her school sports at Mackillop College Werribee, Amanpreet has also played for Hoppers Crossing Cricket Club, Essendon Maribyrnong Park Ladies Cricket Club, Point Cook Cricket Club and Metropolitan West.
Amanpreet’s parents migrated to Australia from Punjab, India, and she has two other siblings. Her mother is from Nawanshahar and father hails from Jalandhar. She has travelled to India a couple of times to meet her grandparents whom she misses a lot.
She likes the sociable nature of cricket and the need to work together as a unit, making for great camaraderie and teamwork. The game excites her so much that she would even consider it as a possible career.
As she sweats it out on the nets in both preparation and perspiration, Amanapreet has this simple advice to aspiring cricketers: involve with clubs, practise a lot and give it your best.