Indonesian's thrill with their shuttlecocks 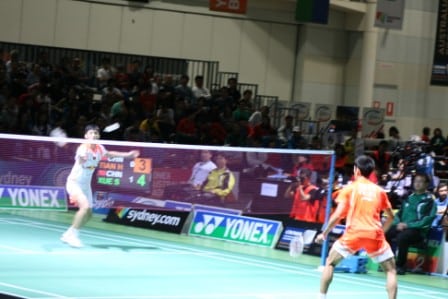 
The final showdown at the Yonex Badminton Championship 2013, held in Sydney, was quite an anti-climax, after six days of intense games. Most of the seeded players across all events (singles and doubles) had made their exit before the finals on Sunday April 7. Unlike the previous year, when China ruled in most events, this year was a success for Indonesia as they won three of the five events. Unfortunately, however, Australian and Indian players had already made an early exit.
The tournament was played from April 2-7at the Sydney Convention and Exhibition Centre, with an impressive draw of players (288 in all), including Ajay Jayaram (seeded 9) and Gurusaidutt (seeded 11), from India. There were many players from Australia too, but unfortunately both Indian and Australian players were knocked out by the pre-quarter finals.
The most impressive Indian player was Gurusaidutt who went down in 3 sets to the number one seed, Chong Wei Lee: 21-10 18-21 21-15. Before that, Ajay had lost in straight sets to the number four seed, Wei Feng Chong: 21-19, 21-15. The two Indian players did not go down without a fight, especially Gurusaidutt.
Earlier on day one, Arvind Bhat gave superstar Chong Wei Lee a scare using his height to advantage, but was ultimately beaten by Lee?s accuracy of shots; Lee won 21-10, 21-18. What the Indian players lacked mainly was the finishing killer shots that their destroyers possessed in good measure. The Indian players seemed to rally and return well, but were unable to finish the rally with a winner.
Some of the highlights of the tournament were the emergence of young Chinese player, Song Xue. At the pre-quarters, he destroyed former world champion Taufiq Haidayat of Indonesia, and at the quarters eliminated last year?s runner-up, Tien Minh Nguyen. Song was a delight to watch and won most of his matches in straight sets. If he had the experience to choose his shots wisely when it mattered, he could have easily won.
The winner was another unseeded Chinese, Houwei Tian, who had a near flawless game and possessed an answer to everything that his opponent, Song, threw at him at the finals. One of the toughest things in badminton is to play the backhand stroke and Tian did that with grace, power and ease. However, his key weapon was his killer smashes. Whenever he leapt in the air to unleash one of his smashes, the crowd roared.
The Indonesian pairs at the doubles were a treat to watch: fast, furious and fun. They dominated the finals so much so that the men’s doubles was an all Indonesian affair leaving the crowd little to hoot and cheer about. The eventual winning Indonesian pair was last year?s semi-finalist, Angga Pratama and Ryan Agung Saputra. At the women?s singles final, Japan’s Sayaka Takahashi’s overcame her opponent, Nichaon Jindapon, of Thailand, in straight sets. Although the latter executed some breathtaking cross court net shots, she was a victim of her errors.
The semifinals proved to be a cracker of a day. Seven of the ten matches went to three sets, which gave spectators a badminton feast. It ended with huge disappointment too. The number one seed, Chong Wei Lee, was defeated by Houwei Tian: 19-21 21-17 18-21. The winner played a highly motivated game and Chong made a few unforced errors that made it harder to make a comeback. Some from the crowd left early, disappointed that their superstar was gone.
The crowd, mainly of Asian background, cheered boisterously till the finals. The exit of top seeded players, same country matches and the lack of many Chinese players at the finals meant that the crowd was a lot quieter and more sober than the previous year finals.
One must also not forget the efforts of the referees and linesmen, who tirelessly ensured that the games were played properly. I witnessed one yellow card being flashed at a Chinese player for disobeying a referee?s instructions to carry on playing. This seemed quite tame considering what happens in many other competitive sports.
While this year?s event was successful, it was announced that from next year onwards, the event is going to be transformed into a Badminton World Federation (BWF) Super Series. The Badminton Australia community was very excited about this news. This change means that Australia will be able to attract the top world ranked players to Sydney, at the new venue: Sydney Olympic Park. See you there next year.
- Advertisement -
Share
WhatsApp
Facebook
Twitter
Linkedin
Previous articleSaying no to nuclear
Next articleStalking a leopard