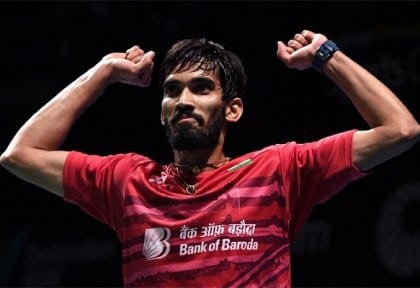 Kidambi Srikanth stayed committed in his dominating run to clinch the Australian Open Super Series men’s singles final. This was his third straight Super Series final who had only last week secured the Indonesian Open.

The Indian took less than 30 minutes to outclass Olympic champion Cheng Long of China in straight games 22-20, 21-16.
This was the third straight Super Series final win for Srikanth who had only last week secured the Indonesian Open.
In the first game, the 24-year-old Srikanth played a perfect net game which troubled Long.
Tailing 17-19 in the last, Srikanth displayed some quality shots and smashes to make it 21-19. But the Chinese player made it 20-20 (deuce). A focused Srikanth then changed his strategy and started playing an attacking game to edge past the World No.6.
The second game saw a much improved performance from the Indian. In a totally contrasting game, Srikanth played long rallies. The Chinese shuttler struggled and surrendered the game.
With Indian Prime Minister Narendra Modi leading the well-wishers, congratulations poured in for star shuttler on his title triumph. “Badminton player Kidambi Srikanth recently won the Indonesia Open. He has made the nation proud,” PM Modi said in his monthly radio broadcast programme ‘Mann Ki Baat’ The PM also congratulated Srikanth on Twitter.

We are really proud of the victory of @srikidambi in the Australian Open. I congratulate him for yet another wonderful win.