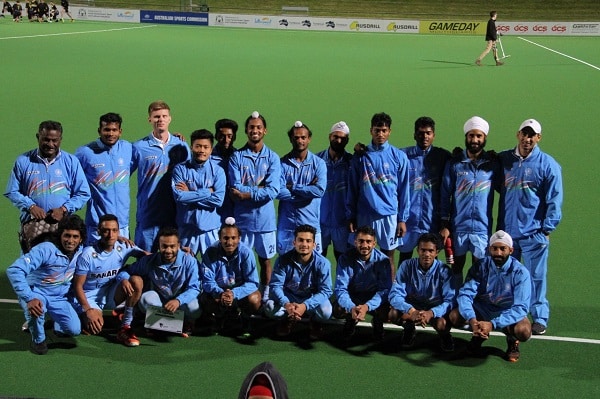 Indian men’s and women’s ‘A’ teams for hockey were in Perth recently to take part in the highly competitive Australian Hockey League.
While there weren’t any Chak De! India-esque miraculous moments, the teams got to experience some pressure hockey and did quite well. The men’s team finished fourth and the women’s team, which took part in the league for the first time, were in ninth place.
The League witnessed ten teams including defending champions Queensland, Victoria, Northern Territory, South Australia, Western Australia, New South Wales, Tasmania, Australian Capital Territory and touring teams: New Zealand Development and India ‘A’ teams. The Australian Hockey League is Australia’s premier national domestic field hockey competition.

Both the teams and their coaches left India to participate in the league beginning September 28.
Talking to Indian Link about the men’s team’s performance, the coach Vasudevan Baskaran, an Arjuna awardee and captain of the Indian team that won the 1980 Summer Olympics in Moscow, said that playing against Australia prepared the boys to face any team in the world. “It is a wonderful opportunity for India’s developing players to test themselves against Australia’s best. Perth has one of the best stadiums, infrastructure and strong club competition,” Baskaran said.
Women’s team coach and Olympian Baljeet Saini agreed. “The exposure this team received would definitely go a long way in identifying the next line of talent,” he said.

Vikas Dahiya, goalkeeper and captain of the men’s ‘A’ team, said, “We have a very good mix of young and talented players in the under-21 age group. This league is where they are evaluated and challenged to perform under real pressure.”
Talking about a typical day in the sportsmen’s lives, Dahiya said that nearly 360 days in a year is spent in matches and practice camps. “The team is from different parts of India, yet they leave their families and come together to a common base and rigorously train to coach under intense supervision,” he added.
Before heading for this Australian League in Perth, the men’s India ‘A’ team trained at Sports Authority of India’s Bengaluru centre, while the women practised in Bhopal’s SAI Centre.

Preeti Dubey, the 19-year-old captain of the women’s team, exhibited unwavering agility and stamina. Hailing from Gorakhpur, this small-town girl chased her dreams that took her to Rio for the 2016 Summer Olympics. “The team is very united. About five of us have international exposure and we motivate the rest of the team to perform well,” she added.
While there were no podium finishes, it was the teams’ positive approaches and commitment to give their 100 percent in every aspect that mattered, said Baskaran.
In the first match against Western Australia, India’s Affan Yousuf was declared Man of the Match. “The men have great energy and potential, we need to expose them more often to international standards,” Baskaran added.
Sukhdev Pandher, the hockey coordinator for Sikh Association of Western Australia, said that such matches are fun-filled opportunities for passionate hockey fans to connect and spread awareness about this sport. A player himself, Pandher has been marketing this sport, spreading awareness about Australian Hockey League at cultural events and festivals.
“It’s only through such events that many realise hockey is still a cherished sport,” he said, adding that there are many parents who wish to get their children trained in hockey. There are various group lessons and children as young as six years old get enrolled to play and improve their overall fitness. “This is a game that definitely builds stamina and challenge. While cricket may still be a favourite for most Indians, but as a national sport, hockey still remains a class apart,” he said.