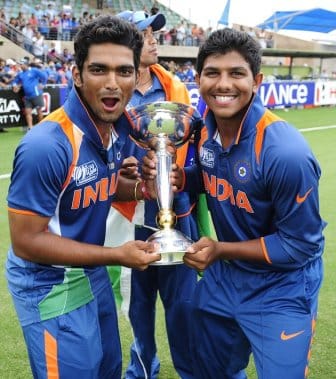 It’s been an exciting few days in cricket as news just in that India has taken out the U19 International Series. India defeated Australia by eight wickets in the Series final at Marrara Oval in Darwin today.
The Aussie players may have spent last night watching one of last year’s Australian U19 representatives, Ashton Agar, bat his way into history over in England. But they were unable to use that inspiration to produce any Agar-like heroics with the bat today.
India never looked troubled in their run chase today and reached Australia’s total of 75 in only the 16th over to finish the Series unbeaten.
Indian captain Vijay Zol won Player of the Series after a dominant tournament with the bat.
Australian fast bowler Matt Fotia was the only player to snare a five-for during the tournament and finished top of the bowling table with 10 scalps at an average of 17.20. Fellow teammate Cam Valente was also impressive over the Series and finished second on the bowling table with nine wickets at 15.89.
Sixteen-year-old Jake Doran was the best of the Aussie bats throughout the tournament with a spectacular average of 195 and an aggregate of 195 runs (second behind Zol’s 284 runs).
The U19 International Series is part of Cricket Australia’s (CA) Under 19 high-performance program and has a decorated history of producing the next generation of Australian players including Michael Clarke, James Pattinson and Agar.
CA’s National Talent Manager Greg Chappell has worked in the last three U19 programs, including identifying and nurturing the talent of Agar and Pat Cummins, and has watched the U19 Series in Darwin closely.
Chappell said Australian cricket fans had a lot to look forward to in the coming years.
“Doran is the quintessential all-round cricketer for the modern era for he is an accomplished wicket-keeper who also bowls some handy left-arm seamers.
“[He] shows enormous potential as a left-hand middle order player in the mould of Michael Hussey,” Chappell said.
Chappell also identified opener Matthew Short as another batsman to watch, and said he had been impressed by young bowlers Fotia and Valente.
“[Short] has shown enormous potential as a stroke player and is also a promising off-spin bowler who fields well. He has already been recognised by Cricket Victoria with a rookie contract for next season.
“[Fotia] is a strongly built young man who likes to bowl fast and who loves a chat.
“[Valente] is a clever medium fast bowler and lower middle order batsman from South Australia. Cam is a competitive young man who has a good understanding of the tactical requirements of the game and is a proven wicket-taker,” Chappell said.
Australia underperformed with the bat this Series but Chappell said it was up to the players to use these experiences as a good learning opportunity.
“Early signs suggest that talent is not the problem. It will come down to how much is learnt from the experiences; then it is down to commitment, desire and execution,” Chappell said.
Australia is currently preparing for the ICC U19 Cricket World Cup, to be held in Dubai in February 2014. The next test for the Aussie U19s ahead of next year’s World Cup will be an U19 quad series against India, South Africa and Zimbabwe in India during September.
More of Greg Chappell’s thoughts on Australia’s best emerging talent can be found here. U19 International Series match reports and final points table can be found here.