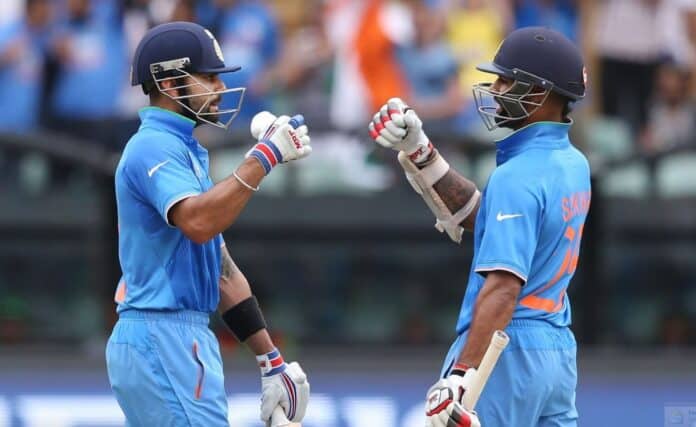 Reading Time: 3 minutesLooking to start their title defence with a bang, and bucking their recent form against Australia and England in the Tri-series, a determined India beats Pakistan in their World Cup opening match


Looking to start their title defence with a bang, and bucking their recent form against Australia and England in the Tri-series, a determined India beat Pakistan in their World Cup opening match at the Adelaide Oval. A century by vice-captain Virat Kohli took India to 7/300 which fierce rivals Pakistan failed to chase, bowled out for 224.
India has won all five previous meetings against Pakistan in the World Cup since the two teams first played each other in the 1992 Cup which, incidentally, was also held in Australia and New Zealand. This time they beat their neighbours by 76 runs to take the scoreline to 6-0.
After winning the toss, India opted to bat with openers Rohit Sharma and Shikhar Dhawan. Rohit was forced out in the eighth over, but Dhawan was able to start a solid partnership with Kohli, allowing the Men in Blue to build a high total.
Confusion in the 30th over resulted in Dhawan being run out, but Kohli was able to continue his run scoring with Suresh Raina who smashed 74 off just 56 balls.
Kohli continued his level headed play to register his 22nd One-Day International century, the first by an Indian against Pakistan in a World Cup match. Kohli was later declared Man of the Match.
India looked as though it would get a 330-plus total, but Sohail Khan managed Kohli’s prized wicket leading to a batting collapse. Raina, Ravindra Jadeja, captain Mahendra Singh Dhoni all left the crease after a short period, while Rahane was taken out for a duck.
Pakistan’s Sohail, playing in only his sixth ODI, picked up his first five-wicket haul.
Pakistan openers Ahmed Shehzad and Haris Sohail looked to be forming a solid partnership, until Sohail edged one to Raina in the slips.
Ahmed Shehzad, Sohaib Maqsood and Umar Akmal all fell with no runs on the board leaving Pakistan at 5/103.
Captain Misbah-ul-Haq managed to salvage the match scoring his 39th half-century, but he ran out of partners and was caught in the 46th over.
Indian pacer Mohammed Shami led the bowling attack, picking up 4/35 from nine overs. Fellow pacers Umesh Yadav on 2/50 and Mohit Sharma on 2/35 as well as spinner Ravichandran Ashwin’s 1/41 helped slow the Pakistani attack.

Indian Captain 33-year-old MS Dhoni lauded the team for their performance.
“I was very happy with our batting. When you are batting first, it is not easy over here. It doesn’t come on that nicely. It has a bit of a variable pace initially but gets comfortable after that,” he said at the post-match awards presentation. “It was important we stayed in the middle. There was a big partnership between Virat and Shikhar and then Raina capitalised as well.”
Pakistan’s Misbah was gracious in defeat. “They posted a big total, and bowled really well. We lost our way with three wickets in the middle,” he said.
Team India found praise from all corners on social media.
Former Indian batting star, ‘Little Master’ Sachin Tendulkar was one of the first to congratulate the team. “What a convincing victory by Team India. Way to go,” he wrote on Twitter.
Indian Prime Minister Narendra Modi tweeted to the team from his popular account @narendramodi: “Congrats Team India. Well played. We are all very proud of you.”
The Indian President Pranab Mukherjee also tweeted his compliments to the Indian cricket team: “Congratulations Indian Team on victory in ICC World Cup’s first match; wish you continued success in coming matches,” the president wrote.
A host of Bollywood celebrities also tweeted their congratulations, with Amitabh Bachchan writing, “YEEEAAAAHHHHH! India wins … my second prediction came true too … is it got something to do with the date 15th Feb! 15th Feb! historic date for me … on this date 46 years ago in 1969, I signed my 1st film to join the Film Industry. Well played INDIA … entire team showed resolve, talent and determination! May you continue such onwards … JAI HIND!”
India will play South Africa in their next group stage on Sunday 22 February at the MCG in Melbourne.