In sync with her dreams 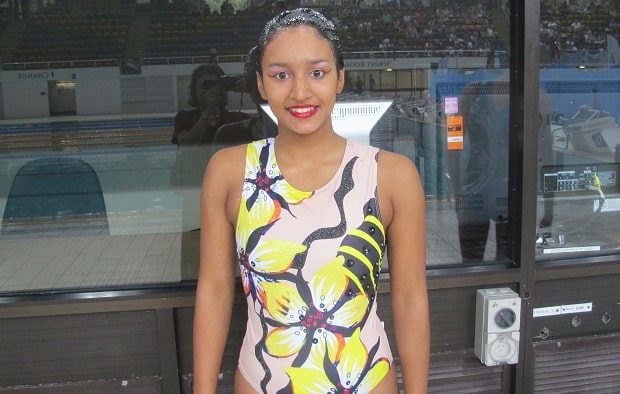 Reading Time: 3 minutesDespite being the only Indian on the World Cup team, when it comes to synchronised swimming, Prateeti Sabhlok is no fish out of water, DHANYA SAMUEL reports.

It’s a sport that immediately brings to mind graceful swimmers performing intricate, rhythmic, complex dance and gymnastic moves to beautiful music, in the water. An extremely difficult sport, synchronised swimming requires superior swimming skills, flexibility, endurance, strength, extraordinary breath control, artistic inclinations, precise timing and control of the body in water. And this is exactly what Prateeti Sabhlok has achieved as she trains hard with her team to represent Australia at the upcoming Synchro World Cup to be hosted in Quebec City, Canada from 2-4 October, 2014.

A sport where you find very few Indians, Prateeti has given us much to be proud about. She has been the Victoria State Junior Figure Champion for three years in a row – 2011, 2012 and 2013. She is also the first Indian to be awarded the Ros Keeble Achievement Award this year for the highest swimmer contribution to the sport of synchronised swimming.

Prateeti has been regularly participating in national level competitions since 2007, and was also selected to be a member of the Australian Talent ID Squad in 2009. She was part of the team that represented Australia in the 2010 Oceania Championships in Samoa and also the 2011 New Zealand Championships held in Hamilton, New Zealand. Her skills and talents did not go unnoticed and she was one of three Victorian girls (in a team of eight) selected to represent Australia at the Canadian Open Championships held in May 2014, where her team brought honour to Australia by winning the silver medal in two categories – Team (Tech) and (Free) Routines.

A native of Delhi, Prateeti has been living in Victoria since the age of five. She loved to swim and was introduced to the fascinating world of synchronised swimming by her mother. “I fell in love with this beautiful sport and started to train as a synchronised swimmer from the age of nine,” she told Indian Link. Prateeti mostly trains at the PLC Aquatic Club, Burwood and sometimes also at Victoria University, Footscray.

In preparation for the upcoming World Cup, Prateeti trains hard for eight to 10 hours, five to six times every week concentrating on fitness, flexibility, swimming and synchronised swimming skill work with her current coaches, Erika Leal-Ramirez and Dilini Narmada. She does all this while pursuing a Bachelor of Arts degree at the University of Melbourne. “The training camps are intensive and are held interstate as all the girls training to compete at the World Cup are from different parts of Australia and must fly to one location, usually Canberra or Perth”.

When asked if she faced any difficulties being an Indian in this field, “I have only received support and encouragement from all corners so far”. She also mentioned that though she is the only Indian, her other team members belong to diverse backgrounds which lends a multicultural camaraderie to the whole team. Their primary focus is their love for the sport which shines through in every team event they take part in.

But there is one difficulty that Prateeti encounters and that is lack of funding. Synchronised swimming hardly gets any kind of federal funding or support which leaves the swimmers to raise their own funds for travelling expenses, gear and training sessions. Apart from Meadore, which provides training bathers for the team, Prateeti and her team are unsponsored and struggling to meet expenses. Most of her expenses have been paid out of her family’s pocket and the remaining through fundraising programs. For this reason, the team approached Sportaroo, an online fundraising website to try and raise money to meet the cost of their training and make their World Cup dream a reality. The money raised through the website will be distributed equally amongst the team members.

Prateeti dreams of participating in the Olympics one day and that dream can become a reality with a little bit of help from all of us. Head over to https://www.sportaroo.com/synchrosisters and spare a few dollars to help this vivacious young girl achieve her dreams and make us proud.