An image of kids playing cricket in the sand dunes of Osian near Jodhpur in Rajasthan, has made Steve Waugh the Wisden Photographer of the Year.

In an interview with Indian Link last year, Steve spoke with warmth about the 17 days he spent travelling around India, most of these with a camera, aimed at everything cricket – cricketers, cricket crowds, cricket paraphernalia.

“My favourite images are those that come from cricket as part of daily life in India,” he had said then. 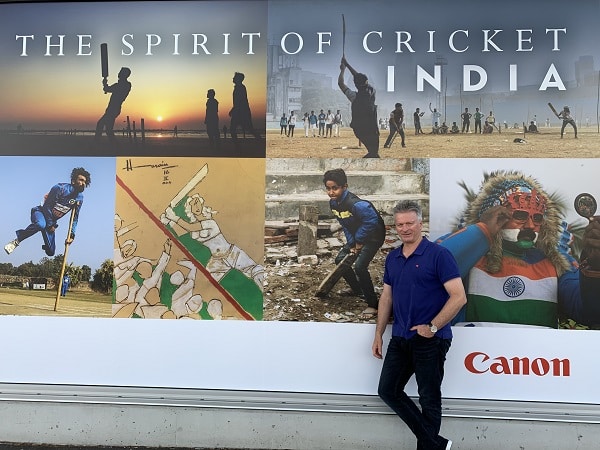 In fact, in the award-winning photo, it is easy to be transported to a time and place where a quick game of cricket is fashioned in the least likely place – amidst sand dunes, even as a convoy of camels slowly moves past in the backdrop.

It won the heart of the judges from among the 300 images that were submitted for the contest.

A keen photographer since his youth (and one who frequently sat in the front of the tour bus in India with camera poised), Steve received special instruction for this latest project from Trent Parke, an ex-cricketer and professional photographer who travelled with him. They spent 12-14 hours at work each day, usually starting at the crack of dawn.

Other winning images included one from the BBL by Darrian Traynor (the Sydney Sixers‘ Jordan Silk mid-air as he took a catch at the border line) and a striking one by Jed Leicester who caught a lone English spectator atop a rocky cliff looking down at a cricket game played below.

“Cricket means a lot to the people in India,“ Steve told Indian Link.  “I think it’s because it’s a simple game, all you need is imagination, enthusiasm and a bat and ball, that’s all you need to do to play cricket. That’s the case in India, you can find a bat and ball anywhere, you can make the stumps from bricks, or fences or rocks or stones or whatever is available, and you can have a game of cricket.”

About cricket being a great leveller in the nation of great extremes, he had reflected,  “There are 800 million people living under the poverty line and cricket brings them together. It gives them something to be proud of because it’s something bigger than themselves and they feel as if they’re connected and a part of it. I think that’s why it’s a religion in India, because it gives a lot of people hope and happiness and they feel proud to be associated with cricket.”

It is a thought that is represented in all of Steve Waugh’s images in the book – a collector’s item.