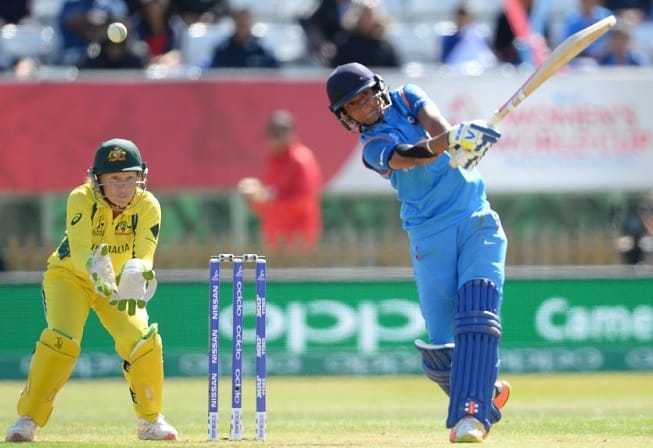 India thrashed Australia in the semi-final and set their date with hosts England in Sunday’s Women’s World Cup final at The Lord’s in London.

All-rounder Harmanpreet Kaur’s scintillating 115-ball unbeaten 171 helped India thrash Australia by 36 runs in the second semi-final in Derby and set their date with hosts England in Sunday’s Women’s World Cup final at The Lord’s in London.


Electing to bat after winning the toss in a rain-shortened 42-overs-a-side semi-final at the County Ground in Derby, Kaur hammered her third One-day International ton, laced with 20 fours and seven massive sixes, to set a daunting 282-run target.
In reply, the Southern Stars could only muster 245 against some disciplined bowling effort from the Indians.
This will be India’s second World Cup final, having reached the summit-clash in 2005 where they lost to Australia at Centurion.
India put on a collective effort on the field as the Southern Stars failed to get going in the initial stages of their chase. They lost the top order comprising the in-form trio of Nicole Bolton (14), Beth Mooney (1) and skipper Meg Lanning (0) for almost nothing on the board.
Thereafter, Elyse Villani (75) and Ellyse Perry (38) joined forces to 105-run fourth wicket stand that threatened to take the match away from the grasps of the Indians.
It was the once again left-arm spinner Rajeshwari Gayakwad, the architect behind the 186-run win in the previous match against New Zealand, who turned the tide in favour of Indians with the key wicket of Villani.
It was one-way traffic thereafter for the women-in-blue as wickets kept tumbling at regular intervals and none of the lower order Aussie batswomen, barring Alex Blackwell (90 from 56, 10*4, 3*6) managed to intimidate the Indians.
Blackwell frustrated the Indians with some lusty blows en-route her 24th ODI half-century, which came off 36 balls and together with the No.11-batswoman Kirsten Beams (11 not out) added 76 runs for the final wicket.
With Blackwell taking the Indians to the cleaners, there were a few nail-biting moments towards the later part of the innings, but Deepti kept her calm, cleaning Blackwell’s middle stump and seal India’s place in the final.
For India, left-arm spinner Deepti Sharma emerged the pick of the bowlers with three wickets while veteran pacer Jhulan Goswami and her partner Shikha Pandey took two wickets apiece. The spin duo of Rajeshwari Gayakwad and Poonam Yadav chipped in with one wicket apiece.
Earlier, coming in at No. 4, Kaur bailed the team out with two crucial partnerships — 66 runs with skipper Mithali Raj (36 from 61 balls, 2*4) for the third wicket and then a 137-run fourth wicket stand with Deepti Sharma (25 from 35, 1*4) — after India lost both the openers cheaply inside the first 10 overs.
Mithali continued from where she left against New Zealand in the final group stage game, meddling the balls to their merit and slowly rescuing India’s drowning ship before a leg-spinner from Kirsten Beams cut short her stay in the middle.
At 101/3, the 28-year-old Kaur was at her attacking best but needed someone to support her at the other end, as Deepti played the perfect second fiddle with her waiting game. The Australians by now had failed to find an answer to the Chandigarh girl’s onslaughts.
Such was the ferocity of her attack, that the Kaur got to her third ODI hundred in just 90 balls before launching most of the Aussie bowlers out of the park.
Unable to stop her carnage, Lannings turned to her opening bowler Ashleigh Gardner, but it only resulted in Kaur milking the pacer for 23 runs, which included two consecutive sixes and as many boundaries in an over.
The fall of Deepti brought in Veda Krishnamurthy (16 from 10, 2*4) who along with Kaur added a 19-ball unbeaten stand of 43 runs, as India found themselves in a comfortable position towards the end of their innings.
In quest of their maiden World Cup triumph, India will now face the English eves at The Lord’s.
Brief Scores: Indian women 281/4 (Harmanpreet Kaur 171 not out, Mithali Raj 36, Deepti Sharma 25, Ashleigh Gardner 1/43) beat Australia women 245 (Alex Blackwell 90, Elyse Villani 75, Ellyse Perry 38, Deepti Sharma 3/59, Jhulan Goswami 2/35, Shikha Pandey 2/17) by 36 runs.
-IANS
- Advertisement -
Share
WhatsApp
Facebook
Twitter
Linkedin
Previous articleREVEALED! 10 worst suburbs for mobile phone use while driving
Next articleRam Nath Kovind elected as 14th President of India