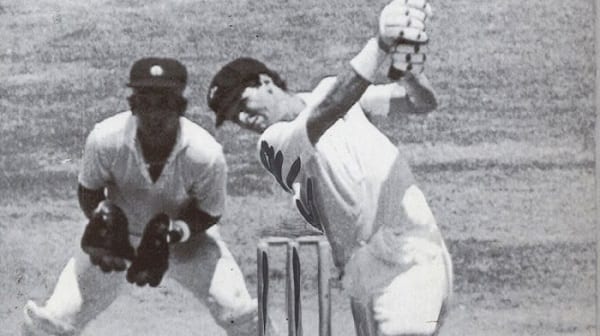 For some strange reason, a 51-second video clip of Dean Jones being bowled neck and crop for a duck by the legendary Kapil Dev in a Test against Australia went viral on Wednesday, with a commentator uttering the words “that’s the end of Dean Jones”. And, on Thursday Jones died of a cardiac arrest, aged 59 years and 184 days, in Mumbai. Jones, who was in India to honour his contract with a broadcaster for the IPL, was close to many Indian players, like Kapil Dev and Dilip Vengsarkar, and was a regular visitor to India for cricket-related work.

A top order batsman, Jones, who was part of the second Tied Test in which he scored his maiden double century in 1986 in Madras, played 52 Tests and 164 ODIs between 1984 and 1994. He was a gutsy batsman and wasn’t scared of stepping out to play speedsters. His running between the wickets was very brisk. Jones is perhaps best known for his 210 in the Tied Test, his maiden double century at that level. It was an innings after which he had to be rushed to hospital, dehydrated after an epic eight-and-a-half hours at the crease in hot and humid Madras, as Chennai was then called. “A day that changed my life forever,” Jones tweeted on September 19, on the 34th anniversary of the Tied Test.

Another tweet of his that day read: “This Test was the renaissance for Australian cricket. It was our Mt Everest moment. Under AB [Border] we started to believe that we can compete against the best. Great friendships started with the Indians. Our journey had just begun!” Indeed, Jones’s friendship with Indians had well and truly begun in 1987, and some of his friends, like Kapil Dev, were in the team that played at Chepauk. India proved lucky for Jones as he was part of Allan Border’s team that won Australia their first ever World Cup, in 1987 at Eden Gardens, Kolkata.

After retirement, Jones started getting TV work in India and was nicknamed ‘Professor Deano’. He even named his twitter handle @ProfDeano. Jones’s love affair with India continued both on and off the field.

In Test cricket, although he played only three matches on Indian soil, his average here – 92.75 – was the highest of the six countries he had played in. Dean Jones played 18 ODIs in India and tallied 719 runs at 44.94. Jones once also played alongside Indians in unofficial cricket. When a World XI gathered in England to celebrate the bicentenary of the Marylebone Cricket Club (MCC) in 1987, former India captain Dilip Vengsarkar partnered Jones in a game against Gloucestershire in Bristol.

Indian cricket great Dilip Vengsarkar told IANS, “I was absolutely devastated when I heard this news. Of course, Dean and I played against each other, representing India and Australia. We also played together once. It was one of the three matches played before the main five-day game between the MCC and Rest of the World XI at Lord’s in London. Dean and I had a 200-odd-run partnership. I scored 171 and he scored 70-odd in that match.” He continues, “Of course, I knew him very well. He was a very nice, jovial person. We used to catch up when he came for Mumbai for commentary etc. He was a good friend. And he used to play golf also. So, I was surprised that he collapsed and died today. It’s absolutely shocking.”

In the mid-2000s, Jones also applied for the India coach’s job. Although he didn’t get it, he became coach of the Islamabad franchise in the maiden Pakistan Super League in 2016 and guided the team to the title. Dean Jones played a prominent role in the revival of Australian cricket in late 1980s, especially during the 1987 World Cup and the 1989 Ashes Test series. He went on to captain Victoria and Derbyshire. At times, Jones was too outspoken. As a commentator, he slipped a couple of times. In 2006, he called South Africa cricketer Hashim Amla a “terrorist”, a comment for which he had to pay a penalty. But he was accepted back into the commentary box while Amla forgave him.

On Thursday morning, Jones reportedly greeted everyone at the breakfast table at his Mumbai hotel.

“When he came for breakfast, he was jovial and said ‘good morning boys, hope everything is fine’ to people present there,” a hotel source told IANS.