Cricket for a cause 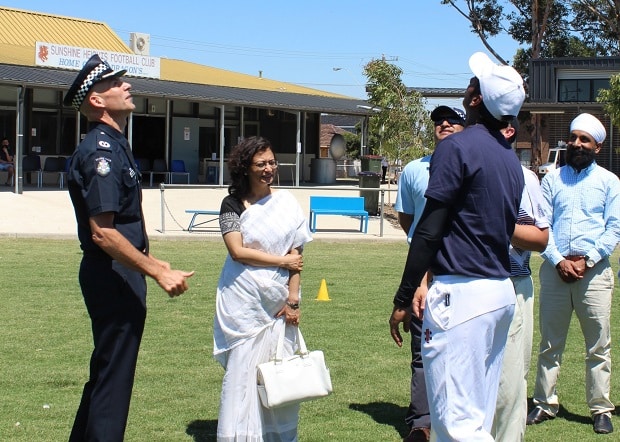 The annual Victoria Police versus Indian Community (Indigos) friendly cricket match was held on a very warm day on January 27 at the Sunshine Heights Cricket Club at Ainsworth Reserve Sunshine. The Victorian Police team took out the trophy for the first time in the event’s history, proving to be too good for the Indigos.

Both teams were buoyed this year with the addition of new elements: the Indigos, captained by Kartheek Garepally, benefitted from the support of players from the Shakti Lions Sports Club, while the Victoria Police club rode to a friendly victory with the backing of the Victorian Police Cricket Club and its 30-year-history. Senior Constable Fitzroy Police and team captain Rob Bartlett has been involved with the team for seven years, and confessed that the team had “been given a bit of a hiding” at the hands of the Indigos in recent years.

The match was conceived four years ago as a way to promote understanding between the Victorian Indian community and the police force.

Senior constable Greg Hinton has been part of the project since its inception, and said he understands the demographics and cultural misunderstandings between the community and the police because of his own Indian heritage.

“Both countries have a love of cricket, so this was a logical place to start”, said Sr Constable Hinton, adding that the timing is especially significant because of Australia Day coinciding with India’s Republic Day.

Community Liaison Officer at Footscray Ash Dixit was one of the first Indians to join Victoria Police ten years ago, and said that one of the aims of the event is to bring about understanding between the community and the police.

“There’s a lot of under-reporting in the Indian community with things like domestic violence”, he said. “We want to encourage (the community) to understand that the police in Australia are different from the police in India”.

Indian Consul General for Melbourne Manika Jain was in attendance, and together with Victoria Police Assistant Commissioner Andrew Crisp, greeted the players and spectators. Asst. Commissioner Crisp said that although previous matches had been held at Fawkner Park near the city, it was good to be “in amongst the community” at Sunshine.

That sentiment was echoed by Nick Hatzoglu, Club Manager Cricket Australia, who said that the match was a way the police could show “their human face”.

At one point, amid the baking conditions, a small whirlwind lifted a couple of cones into the air, but nothing was as memorable as Manny from the Indigos smashing a huge 70 runs off 16 balls before retiring. Batting first, the Indigos set a target of 179 runs to chase. Brad Miles posted an impressive 78 on the board before retiring, and soon after the wickets began to fall, but not too soon to hit a score of 181 in the nineteenth over.

At the awards ceremony, Indigos Vice-President Ramesh Parasuram and the Victoria Police team’s Vice-President thanked sponsors JJL I.T. and Caltex Albert Park, as well as the Sunshine Heights Cricket Club for their hospitality. Umpires were also recognised before the trophy was handed over to the triumphant winners.

As spectators began to drift away, Leading Senior Constable and Multicultural Liaison Officer Dinesh Nettur told Indian Link that plans are afoot for the Cricket World Cup, currently in Australia ahead of next year’s tournament, to make an appearance at the 2015 Victorian Police vs Indian Community match – something that would bring people together indeed!