A collector’s item from the historic AusvInd 2020-'21 test series, the bat is currently in auction raising funds for Australian charity Grassroots Cricket. 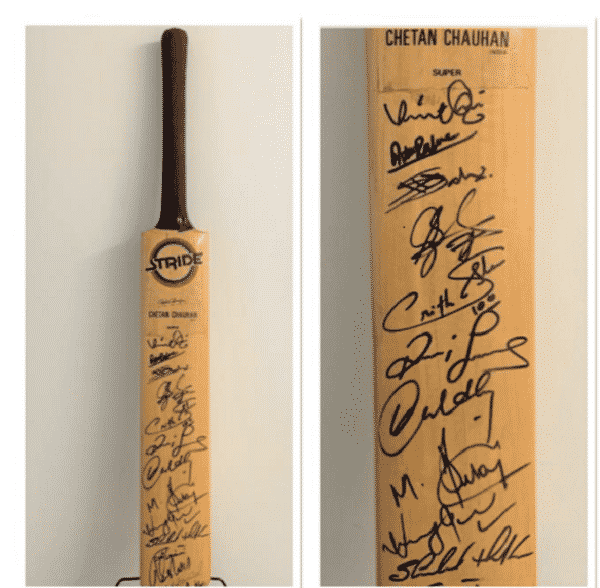 On the third day of the Adelaide Test, India was dismissed for just 36 runs.

On the day that India scored their lowest ever Test score, the team was asked to sign a bat for charity.

Ten days later, they bounced back to win at the MCG through hard graft, resilience, and inspired leadership.

Australia and India went on to draw in Sydney before India dug deep to clinch the series 2-1 in Brisbane on a thrilling final day.

The charity which made the request for an autographed bat, Grassroots Cricket, had followed numerous regulations to get approval for the signing. Permission had to be granted by the Board of Control for Cricket in India and it took several weeks for the green light.

The bat was handed over at Adelaide Oval by Grassroots Cricket representative Rob Ball after it was given the full Dettol wipe down, before being taken to the players by security.

“We are grateful that the team found time to sign this bat,” says Grassroots director Adrian Oosthuizen. “Cricket fans have a fantastic opportunity to bid for this piece of cricket memorabilia – from a series which will long be remembered for uncertainty due to COVID and India producing a thrilling series victory over a tough Australian side.”

The Chetan Chauhan signature bat will be sought after as a collector’s item. Chauhan died tragically in August 2020 from complications caused by COVID.

He was a courageous and stoic Test cricket opener, partnering Sunil Gavaskar in the ‘70s and ‘80s and taking on Jeff Thomson and other Australian fast bowlers with a gritty determination.

He played for India until 1981 and managed the team in later years.

The entire team signed that Chetan Chauhan bat that day including captain Virat Kohli, who returned to India immediately after, for the birth of his first child.

“It is amazing that we are able to enjoy any Test cricket in this disrupted Covid year,” says Oosthuizen. “I think this series is going to be one that will be go down in history. For those in lockdown around the world, cricket has been a welcome distraction.”

Funds raised by the auction will help Grassroots Cricket pilot projects in Zimbabwe and South Africa. With continued support, the charity has plans for projects in Asia and Australia.

Grassroots Cricket have partnered with Lloyds Auctioneers to auction off the bat. Lloyds have generously waived their fees in order to sell the bat online.

“We’re really excited about the opportunity of being able to auction this bat for Grassroots Cricket,” says Grassroots founder Tawanda Karasa. “It is an amazing piece of cricket memorabilia and I am sure will become a prized possession for some lucky cricket follower.”

Late last year, Anita Chauhan decided to donate hundreds of bats to Grassroots Cricket to transform the lives of disadvantaged kids in Africa.

Grassroots is a not-for-profit organisation harnessing the power of cricket to help transform young lives in Africa by providing life coaches, life skills and essential support. This includes the provision of community coaches, life skills training, and the development of out-of-school sport and education programs for teen mothers.

You can make a bid for the Chetan Chauhan bat signed by the Indian Test cricket team here.