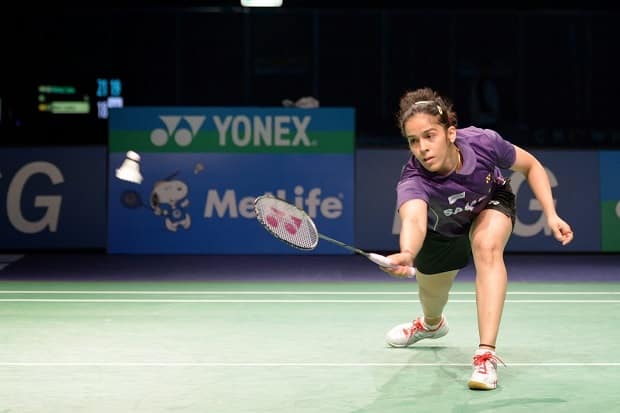 Sunday, June 29 was a proud day for India as badminton player 24-year-old Saina Nehwal became the first non-Chinese player to win the women’s singles title at a Super Series in 2014, after defeating Spain’s Carolina Marin 21-18, 21-11 in 43 minutes.

The pair had met once before, and Saina also won in that instance. The first game of the women’s singles finals had some semblance of a fight between six-seed Saina and Carolina; the second game, however, was quite one sided.

Saina moved around the court quickly and returned difficult shots easily. Her younger opponent, considered one of the feistiest players on the circuit, had played well until the semi-finals, but struggled to match Saina.

In the first game, Carolina narrowed the gap time and again but Saina was able to exploit her weaknesses to the hilt, especially around the net. Carolina did not help herself as she committed a service error to gift an easy point to Saina. This ruffled her confidence and the rhythm of her serves. Carolina played some good strokes but they were neither consistent nor enough to snatch an advantage. Saina on the other hand made few unforced errors and was ruthless in smashing her opponent.

For every point that Carolina won she let out a victorious shout, but Saina was generally composed except for a couple of times when she pumped the air after winning a major point. After winning the championship, Saina let out a victory cry and threw her racquet into the crowd. Except for the initial exuberance soon after her victory, Saina remained quite calm and composed thereafter.

“This is one victory which answered all the doubts,” Saina said. “There were many who thought I could never win again. This is a very special triumph for me because I believed I could win very soon and it happened”.

When asked how it felt to win the Australian Super Series, she said that the victory was quite unexpected and although she felt happy to have won, the feeling of winning had not yet sunk in. “Surely this was the biggest challenge because I had to prove that I still am one of the best players in the world,” a confident Saina stated.

Her march to the finals was dramatic. In the quarter-finals, Saina had vanquished Japan’s Eriko Hirose in straight sets: 21-18 and 21-9. In the semi-finals, Saina played cautiously against the number one seed, Wang Shixian from China. Saina won the gruelling match 21-19, 16-21 and 21-15. This was a major victory considering her opponent was better ranked, and the stadium reverberated with loud cheering for Wang Shixian.

Coming to Australia for the championship, her parents felt that she did not stand a chance of winning but could only play her best. Saina light-heartedly told the media that she would party all night to celebrate this surprise win.

Saina complained about the blisters on her feet that caused much agony throughout the tournament. During the semi-finals she had to take time out during the match as her feet had to be attended to by her physio. She said that her feet hurt as she walked from her hotel to the stadium! Saina thanked her physio profusely saying that without her help, and words of encouragement, she would not have been able to play in the finals. But while she was on court destroying her opponent, no one realised that her feet were sore and in bandages!

Few in Australia discuss the game of badminton. But leading up to the Star Australian Open Badminton Super Series Championship, I was amused to hear my colleagues, who are diehard rugby followers, talking about badminton. Earlier in the week a leading Sydney newspaper had carried an article on Lin Dan, the bad boy of badminton, and Olympic bronze medallist, Saina, who were in town for the competition from 24-29 June. The $750,000 tournament in Australia was the eighth Super Series tournament this year and hugely popular.

The Sport Centre in Sydney Olympic Park drew a record crowd for the Superseries finals and unlike previous years, the capacity crowd had a sizeable number of people of Indian origin. I was also pleasantly surprised to see two large Indian flags prominently displayed in the stands to cheer on Saina Nehwal in the finals. This atmosphere was in contrast to the earlier qualifying rounds where Saina was cheered loudly by just two very enthusiastic supporters!

In the climax of the Australian Open Badminton championship, the bad boy of badminton, Lin Dan won against Indonesia’s Simon Santoso: 22-24, 21-16, 21-7. The first game was a see-saw battle where Simon upstaged the double Olympic and five time world champion. But in the next two sets Lin Dan proved to us why he is considered a great. It was the finest exhibition of strokes that one could hope to see.

I always look forward to the men’s doubles as they are fast and furious. Although my favourite doubles player, Kido from Indonesia, lost in the semi-finals, I was mesmerised by the Korean pair, Yong Dae Lee and Yeon Seong Yoo who won comfortably 21-14, 21-18.

For the past three years I have been attending the Australian Badminton Open, and this was the first year when China did not dominate the finals. It was good to see representation in the finals from many countries across the world.

Here is some spicy news that I came across – Saina Nehwal has just been named on the Indian FHM 100 Sexiest Women’s list. At number 85 Saina is ahead of Miley Cyrus and only five spots behind Beyonce on the list!

And which international sportswoman has the most Facebook followers? If you thought it was one of the Williams sisters or Anna Kournikova you are wrong. It is Saina Nehwal!