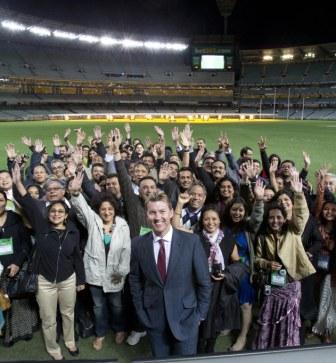 More than 70 travel operators from India were invited by Tourism Australia for an India Mega Family and Workshop in Melbourne recently. Renowned cricketer Brett Lee was roped in as an ambassador for Australian Tourism in India and he began his role as a ‘Friend of Australia’, by taking the agents on a tour of the Melbourne Cricket Ground (MCG). The travel agents were in Melbourne between September 1-6, to experience the best of tourism attractions in Australia and to form business relationships with Australian sellers.

India is Australia’s tenth largest tourism market. It is a market of strong future potential for Australia. Arrivals from India have seen a compound annual growth rate of 11.9 per cent between 2001 and 2011. According to Andrew McEvoy, Tourism Australia aims to grow the Indian visitor market to Australia by up to 300,000 potential annual visitors by the end of this decade.

Minister for Tourism, Martin Ferguson reconfirmed Australia’s commitment to the Indian market by launching the India 2020 Strategy recently, which is aimed to capitalise on India’s growing affluence through new consumer research, and by identifying ways to work effectively in its tourism market. According to Minister Ferguson, “India is already one of the world’s fastest growing outbound travel markets and is predicted to grow to 50 million outbound travellers by 2020.”

“Last year, India contributed A$867 million to the Australian economy and has the potential to contribute up to A$2.3 billion annually by the end of this decade if we successfully grow our market share,” he added.

The atmosphere was vibrant at the welcome event as guests enjoyed some Australian hospitality at the aquarium. Agents were divided into teams named Kangaroo, Koalas and Platypus and they competed against each other for the coveted prize of the best photograph during their visit. There were some outstanding and creative contributions; however the Koalas took away the prize amidst a lot of noisy fun. The catering at the aquarium was tasteful and the entertainment provided by a band with flippers on their feet was enjoyable in parts.

During their visit, the travel operators from India had the opportunity to experience Australian food, wine and shopping, and were able to meet some friendly Australians. Besides visiting the world’s most livable city of Melbourne, some agents made a trip to Sydney and the Hunter Region in NSW, the Gold Coast in Queensland, and Perth and Fremantle in Western Australia. Several agents also visited The Whitsundays, Cairns and the Great Barrier Reef in Queensland and Adelaide, the Barossa Valley and Kangaroo Island in South Australia. Using its marketing and research expertise, Tourism Australia intends to target the Indian market where the greatest tourism growth opportunities exist. This familiarization programme was a small yet significant step towards achieving that objective.