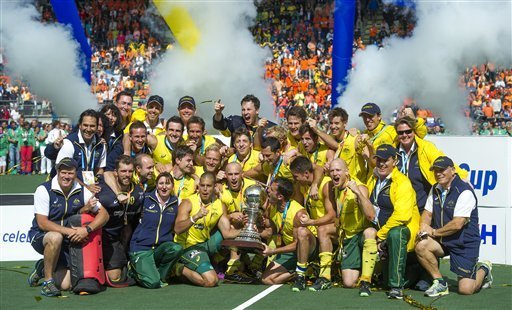 Australia clinched their third hockey World Cup by successfully defending the title they had won four years ago in New Delhi when they thrashed hosts Netherlands 6-1 in the final at the Kyocera Stadium here Sunday.

Earlier, Matias Paredes scored a brace to help Argentina earn their maiden medal at the event when they defeated England 2-0 in the bronze medal playoff.

Penalty corner expert Chris Ciriello was the architect for the Kookaburras after he hammered in a hat-trick while Kieran Govers, Glenn Turner and Jamie Dwyer put in three more field goals. Jeroen Hertzberger scored the only consolation goal for the hosts.

“The boys played really well. I was just lucky to be at the end of finishing it. It is not just a hat-trick for me; it’s for the rest of my team and Australia as well,” said Ciriello.

Dwyer, who became Australia’s joint highest caps holder alongside Jay Stacy with 321 international appearances, said, “We have played really great hockey throughout the tournament. It’s the best hockey we have ever played. The game is getting faster and more attractive and the Dutch played a really good game but thankfully we got the better of them”.

Australia had the Dutch up against the ropes in the first few minutes, relentlessly pushing in the search of the opening goal. However, lightning quick counter-attacks from Netherlands resulted in the penalty corners with Aussie keeper Andrew Charter being forced to make two near identical saves from Mink van der Weerden drag-flicks.

However, the Kookaburras continued to press forward and were rewarded when Ciriello drag-flicked his team back into the game with a 20th minute penalty corner strike. Four minutes later, the Aussies were ahead thanks to Govers. The defending champions went into halftime leading 2-1.

Australia continued their dominance when Turner netted from close range following excellent work down the right from Simon Orchard, playing his 150th game.

Australia quickly moved from 3-1 to 5-1 with Ciriello getting two more goals with powerful penalty corner flicks to complete his hat-trick. The sixth goal came from five time FIH Player of the Year Dwyer.