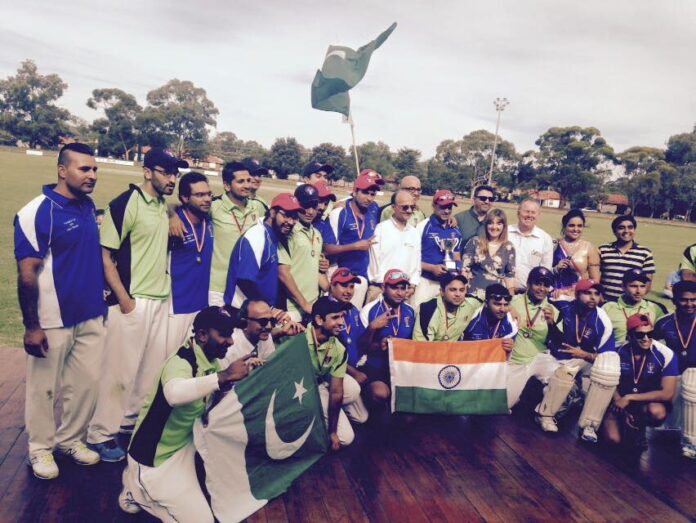 Tickets all sold out for the India-Pak game? Yes, some 20,000 people are estimated to travel to Adelaide from across Australia and overseas for the Sunday 15 February match. Adelaide Airport is all geared up to welcome Indian and Pakistani visitors with “Namaste” and “Salam walekum” greetings.

But it was no problem if you had no tickets for one recent India-Pak clash: anyone and everyone was welcome to this game at Adelaide between the two great rivals.

Cricketers from South Australia’s Indian and Pakistani communities played a Friendship Cup at Kilburn Oval in the name of harmony recently.

This newly-created Friendship Cup brought together the two migrant communities in a preview of the countries’ meeting at Adelaide Oval in the Cricket World Cup clash.

Held in mid-January, the event was the first time the communities had come together locally for a joint event.

The Friendship Cup is an idea that was developed by Multicultural Sports & Community Club (MSCC) and South Australian Cricket Association (SACA) to achieve communal outcomes.

The idea was to provide a platform where people from different backgrounds can come together and enjoy something in a global language such as sport. Cricket is just the start, because that’s something that comes to us naturally, being from the subcontinent. Given the success of this event, SACA and other organising communities have agreed to make it an annual event with the potential to incorporate other subcontinent communities as well (Sri Lankan, Bangladeshi and Afghani).

Perhaps they will get Amitabh Bachchan to provide the live commentary!

This event helped promote greater collaboration between the cultural groups and improved relations between the two communities. Another objective of the event described by Faisal Chaudhry of MSCC was to enable recently arrived migrants to connect with the wider community while utilising sport as a global language. He observed, “Events such as these enable new arrivals to connect with a wide range of people and gives them a platform to network and start a new life with some very positive results rather than suffering social isolation.”

A Kids’ Cricket Clinic was also organised on the same day providing a platform for the children from the communities (aged 4 to 15) to get involved with the sport of cricket and develop skills, under proper guidance from SACA.

This event also provided a platform for a day’s entertainment for the whole family as there were Bollywood performances, food stalls with scrumptious Indian and Pakistani food, henna tattoos, pony rides and face painting and jumping castle for children.

The presence of the Lord Mayor of the City of Port Adelaide and Enfield Gary Johnson and SAMEAC (South Australian Multicultural and Ethnic Affairs Commission) Chairman Grace Portolesi encouraged both the communities.