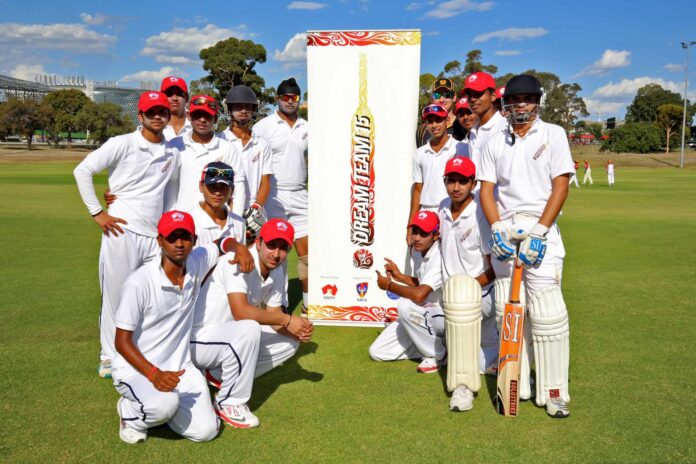 Dream Team 15. That’s the name given to a team of 15 Indian players aged 15 – 17 selected to visit Adelaide, not only to witness India playing against Pakistan at the Adelaide Oval, but also to show their technique to local high school cricketers and learn from them in a cultural exchange.

“I had a dream, to play cricket, to represent India and to be a proud Indian.” These are the words of one of the aspiring cricketers from Dream Team 15.

The program, based on showcasing and improving cricket skills, is an initiative of Premier Jay Wetherill and the South Australian Government, as a gesture of friendship with India.

The initiative is not only about sharing the love of cricket between South Australians and Indians, but also about giving a group of school students from India, from a range of social backgrounds, an opportunity they wouldn’t ordinarily have.

Natasha Malani from Access India, one of the key drivers of the program, said, “Cricket is the basis of a very special relationship between India and Australia.”

Malani explained that the team is called Dream Team 15 as there are 15 players, spending 15 days in Australia, ahead of 15 February when India took on Pakistan in the ICC Cricket World Cup 2015. The program was also facilitated and supported by South Australian Cricket Association (SACA) and South Australian Tourism Commission.

Screening took place across India to select members of the team. Many of the boys from regional areas, travelled incredible distances to participate in the trials that were held in Delhi and Mumbai. The IPL team Rajasthan Royals were official ambassadors and part of the selection committee.

The cricket team attended a training camp at the Adelaide Oval under the Australian cricket team coach where they participated in five half-day sessions at both indoor and outdoor turf facilities. The team trained and played against A-list teams from around the country, including the National Indigenous team. The Dream Team also took part in a T20 tournament against six prestigious South Australian high school teams.

Numerous events were organised for the Dream Team 15 during their stay, including a welcome reception by the Indian Australian Association of South Australia (IAASA) with guests including local children of a similar age group to meet and network.

The team also travelled to the Barossa Valley and other South Australian regions with the official ICC World Cup trophy as it toured the state.

In a once-in-a-lifetime opportunity, Dream Team 15 attended a cocktail reception by the Premier before accepting tickets to the big India v Pakistan match at the very same Oval where they had been training just days before.