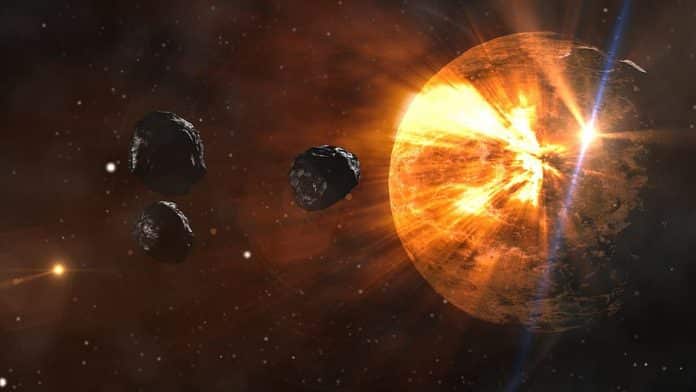 This International Asteroid Day, here’s a crash-course into these fascinating space objects:

While these words are often used synonymously, they are actually very different things. An asteroid is a small, inactive rock orbiting the Sun while a comet is a small, icy object with an atmosphere of dust and gas that vapourises in sunlight. A meteoroid is a small particle from an asteroid or a comet.

Because of their weak gravity, asteroids aren’t even able to hold onto an atmosphere. In fact, they’re so small that the mass of all the asteroids in the Solar System is less than our moon, according to NASA. Some observations have shown ‘gullies’ on the surface of asteroids that may have been carved by water, but those claims are still being investigated.

Asteroids are said to be leftovers from the formation of our solar system over 4 billion years ago. The birth of Jupiter, the largest planet, prevented other planetary bodies from forming between Jupiter and Mars, causing objects there to collide with each other and break off into asteroids. This is where the ‘asteroid belt’ was formed.

Dozens of asteroids have been classified as ‘potentially hazardous’. Some of their orbits come close enough to Earth that they could be on the collision course with our planet if their movements are perturbed. If this happens in the next few decades, technology will have to be developed to explode or divert the asteroid. Remember what happened to the dinosaurs?