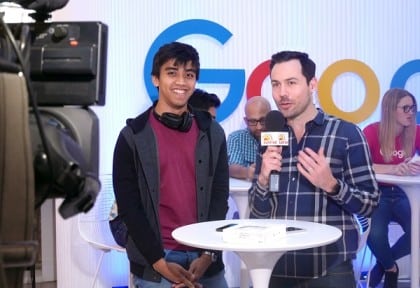 Smartphone fans descended on Telstra stores across the nation recently as Australia became the first country in the world to launch the brand new Pixel and Pixel XL.
Andrew Volard, Director of Devices said Telstra’s exclusive telco partnership with Google in Australia meant Telstra customers were the first in the world to get hands on with the first phones designed end to end by Google.


“Australians are one of the world’s fastest adopters of new technology, so it’s only fitting that we have teamed with Google to open our doors to new Pixel customers here first this morning.”
“We’ve seen strong customer demand for Pixel and customers have told us they’re really excited to try out Google Assistant. This new technology from Google allows Pixel owners to have a natural conversation with their phones getting advice on everything from the fastest route to the theatre to suggestions for the best place to enjoy a meal after the show,” Mr Volard said.
Mr Volard said both phones set new benchmarks for mobile data speeds in Australia making it faster to stream, surf and get advice from Google Assistant.
“Pixel brings together the best of what Google does with software, and now hardware, with one of the world’s most advanced mobile networks. Thanks to the latest 4G LTE technology in the Pixel phones and the Telstra Mobile Network, customers can look forward to fastest mobile data speeds in Australia helping to make the Google Assistant an even more powerful, real-time companion,” Mr Volard said.

The phones are driven by the latest Cat 11 4G LTE technology which allows customers to tap into typical download speeds from 5Mbps to 200Mbps in 4GX areas – a third faster than any other phone in Australia. On top of fast mobile web speeds, Telstra customers will also benefit from next-generation voice calling (Voice over LTE) which delivers high-definition quality and fast call set up times.
Other design highlights include:
- Advertisement -

Both smartphones will be available in Very Silver and Quite Black on a range of Go Mobile Plus and My Business Mobile plans in 32GB and 128GB variants. For example, customers can take up a 5” 32GB Pixel smartphone for $99/mth on a $95 Go Mobile Plus or My Business Mobile plans with 10GB (8GB + 2GB bonus) of data to use in Australia and $4/mth handset repayments when customers stay connected for 24 months (min cost $2376).
**
Australia’s fastest mobile network is based on national average combined 3G/4G mobile speeds. The Telstra Mobile Network offers 4GX in all capital CBDs and selected suburban and regional areas and is progressively rolling out to more places. In other coverage areas around Australia, you’ll automatically switch to our fastest available 4G, which is offered in all capital CBDs and associated airports, most surrounding suburban areas and in over 300 regional areas, or our 3G. Check coverage at: telstra.com/coverage.
Go Mobile Plus Plans and My Business Mobile Plans: If you cancel early the remaining handset payments will be higher as you’ll no longer receive a credit to offset your handset cost.  Usage excludes calls/SMS/MMS to premium numbers, 12xx, satellite numbers and content charges. Allowances expire monthly. Extra Data: If you go over your Monthly Data Allowance, we automatically add data a 1GB block for $10 for use that month. For use in Australia. Shared with eligible data sharing services on your account.